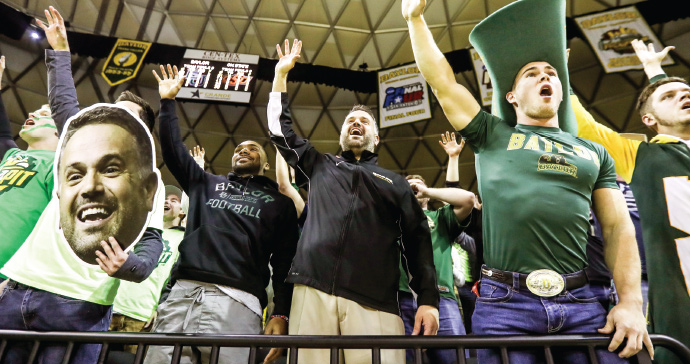 Though neither was highly touted out of high school, Reddick and Dawkins are projected as first- and second-round selections, respectively, in this spring’s NFL Draft.

Rhule’s ability to develop overlooked talent was one of many reasons he was Baylor Director of Athletics Mack Rhoades’ choice to lead the Bears.

When Rhule was named Baylor’s football head coach in early December, defensive back Jalen Pitre (Stafford, Texas) was the program’s lone commitment for the upcoming signing class. Rhule and his staff had less than two months to put together his first class—virtually from scratch.

“We had to be direct and intense with our conversations,” Rhule said. “There were a lot of hard-nosed questions we had to answer, which was a good thing.”

The result was a 27-member class that included three ESPN 300 signees. Baylor’s class, which was projected in the mid-100s nationally upon Rhule’s arrival, was ranked in the top 40 by virtually every ranking service, slotting as high as No. 32 nationally, according to Rivals.com.

When a recruit comes for his official visit, as nearly all of this year’s class did in January, he is shown firsthand what Baylor has to offer. Rhule said the school is an easy sell.

“The facilities and the campus speak for themselves,” Rhule said. “At the same time, recruits get a chance to meet all the people that are here. When you come here and meet the people that are going to be a part of your life, that speaks to young people.”

Rhule believes Baylor offers three things that set it apart from most universities—elite education, elite athletics and a Christian community. He and his staff want players who are interested in all three areas.

“I want to show them what Baylor can do for them, the impact it can have in their lives,” Rhule said. “It’s a place that cares about who you are and not just what you do.”

Evaluation of a recruit’s football abilities takes place long before he sets foot on campus for his official visit. Much of the visit is about getting to know the person.

An official visit usually begins Friday afternoon, during which time the recruit sees what Baylor offers in terms of resources, such as the Beauchamp Athletic Nutrition Center (BANC), Student-Athlete Services, the training facilities and, of course, McLane Stadium. However, Siravo said it is more than bricks and mortar.

“As much as a player is going to see the best uniforms in the country here, the best facilities in Texas here, that can’t distract them from the most important thing, which is the people here,” Siravo said. “Those are the people you’re going to be in touch with for the rest of your life. You may have a helmet in your office one day, but we emphasize the people aspect of it.”

Friday night includes a meal with the players’ families and the coaching staff’s families. Siravo said the connections during this dinner are vital.

Saturday is a full day for recruits as they meet the strength staff, the academic support staff, tour the campus, meet with professors and attend a basketball game. Each recruit has a host—a current member of Baylor’s team—for the weekend. Siravo said Baylor’s hosts this year were a key to the staff’s success.

“Great kids,” he said. “This is a healthy culture. You couldn’t have asked for a better group of kids to host recruits.”

The 48-hour visit concludes Sunday afternoon. Siravo said there were some recruits who had family members who were skeptical about Baylor going into the weekend only to have their eyes opened during the visit.

“That’s a testament to this school and the players and Coach Rhule’s staff,” Siravo said. “A lot of people said after these weekend visits, ‘I saw your coaches interact with each other and your families, and I haven’t seen anything like that.’ You can’t stage that.”