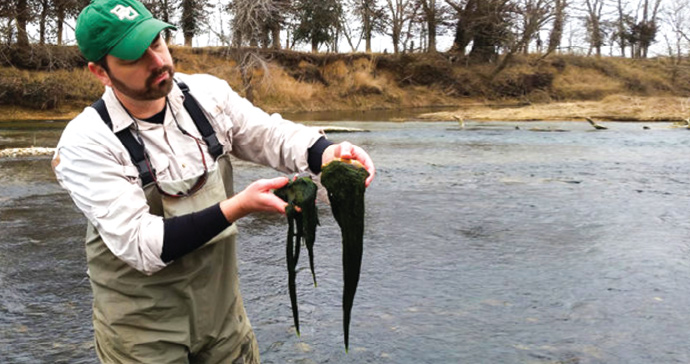 The neighboring states of Arkansas and Oklahoma engaged in a 30-year disagreement that flowed to the U.S. Supreme Court and still could not find full clarity.

It took a Baylor professor and research team to end the dispute.

Since the mid-1980s, the two states have haggled over the water quality in the Illinois River and numerous other rivers and branches flowing out of Arkansas and into Eastern Oklahoma. Weary after years of continued litigation, both states agreed in 2014 they needed a trusted expert to deliver non-biased scientific evidence that both states would accept to resolve the decades-long dispute. They selected Baylor biology professor Ryan King, PhD, and his research team, with the results finally leading to a resolution late
last year.

“I was extraordinarily excited to be part of a study that would directly lead to policy,” King said. “We had a clear objective and timeline, and we spent the last two years visiting more than 35 rivers and streams in Oklahoma to determine an acceptable level of phosphorus.”

Phosphorus, and its impact on water quality, was at the heart of the dispute. Six rivers in Eastern Oklahoma are designated as “scenic rivers,” and as such are subject to special preservation and conservation efforts by the state. The State of Oklahoma deems these rivers as important historically and economically; they remain popular spots for fishing, swimming and recreation.

The headwaters of five of the six rivers are in Arkansas, and Oklahoma complained that their neighbor to the east was allowing too much phosphorus from municipal wastewater and agricultural runoff in the rivers. Phosphorus, while not harmful to humans, promotes algae growth, impacts fish and other aquatic life, and it can turn clear water cloudy.

A 1992 Supreme Court ruling placed the responsibility for downstream river issues on upstream states. Arkansas could be held legally responsible for Oklahoma’s water quality; however, the Supreme Court case did not clarify what levels of phosphorus were acceptable. Thus, litigation between the two states continued apace for nearly 25 more years.

A six-member commission of experts appointed by both states’ governors was organized to come to a mutually acceptable solution. The commission solicited applications from neutral universities to form a team that would determine an acceptable phosphorus level in rivers and streams. In 2014, Baylor’s bid was accepted. King and a team of Baylor students and faculty were charged with determining a phosphorus water-quality standard by which both states would abide.

“My team drove to both states and collected samples from the stream bottoms that contained algae to test for the amount of algae and whether that algae was typical or nuisance algae. We tested aquatic animals like crayfish, too, and we sampled these at 35 different locations 12 different times over the two years,” King said. “The data pointed to a clear number.”

Armed with the data, King presented a comprehensive analysis that led to a unanimous agreement from the commission: The level of phosphorus in the water could not exceed a mean of 0.035 milligrams per liter over a six-month period. With that, a dramatic 30-year feud was put to rest. The standard developed through the Baylor research ensured that Oklahoma’s rivers would remain clear and provided Arkansas a definite and reasonable goal to reach in assessing its water quality.

For researchers, the chance to see immediate policy change through their work is a rare and exciting opportunity.

“So much of my research is about informing policy, but it can often get muddied up by politics,” King said. “But here, at the end of our work, we could see this implemented as a real number. Our entire team worked extraordinarily hard, and I’m thankful that we could do this important work.”