Baylor Board of Regents Adopts Slate of Governance Changes 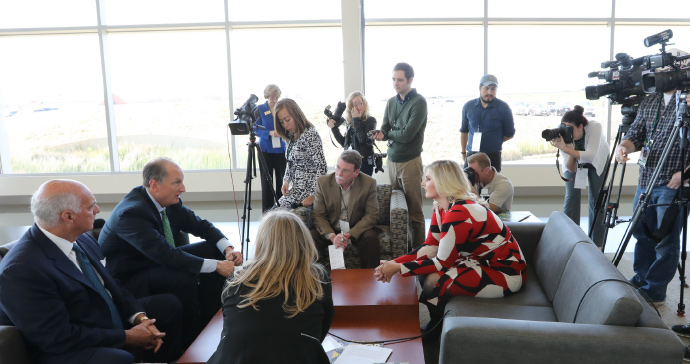 Two of the non-regent members of the special independent Governance Review Task Force--Douglas Y. Bech, BA '67, CEO and owner of Raintree Resorts, and Task Force Chair Gregory D. Brenneman--meet with media after the February Board meeting.

The Baylor Board of Regents adopted new bylaws at their February meeting that will improve University governance by increasing diversity among the Regents, provide voting privileges to a second-term student Regent and give the public a more complete view of Board operations and decisions.

Chair Ron Murff praised the changes, which were based on recommendations by a special independent Governance Review Task Force, as important steps to ensure that Board policies and procedures reflect best practices.

“Combined with the changes we’ve already made, these actions today will make Baylor’s governance model one of the most responsive and transparent of any major private university,” Murff said.

Gregory D. Brenneman, executive chair of CCMP Capital and chair of the six-member Governance Review Task Force, said he and his colleagues were gratified by the Board’s actions.

“This was an effort that has led to significant reforms for the Baylor Board,” said Brenneman, former CEO for major public corporations such as Burger King and Continental Airlines and currently lead independent director for the board of The Home Depot Inc. “We believe these governance changes will build greater trust and confidence within the Baylor community and in the Board itself.”

The Governance Task Force formulated its recommendations after studying Baylor’s governing documents and reviewing best-practices literature from such groups as the Association of Governing Boards of Universities and Colleges and the American Bar Association. The task force also interviewed a cross-section of Baylor alumni and other stakeholders and consulted other institutions that underwent their own governance reviews.

Among the other changes the Board of Regents approved:

The Governance Task Force considered but ultimately recommended against having the Board conduct open meetings.

After studying the issue and conferring with leaders at other private universities, the Task Force concluded in its report to the Board that “open meetings would risk unnecessarily disclosing competitive information and detract from the free and open exchange of views and robust dialogue that are necessary to fulfill the Regents’ fiduciary duties. The Task Force also recognized that very few other leading private universities open Board meetings to broad attendance. A large majority of those with whom the Task Force held discussions did not advocate for open meetings.”

The Board also implemented another major Governance Task Force recommendation by launching a dedicated Regents website. The website features member biographies, committee assignments, copies of the University’s governing documents, agendas for upcoming meetings and an email address for the public to send comments and suggestions directly to the Board.