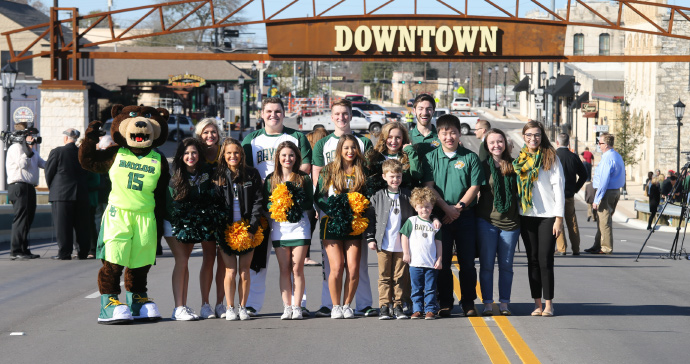 A crowd dressed in green and gold gathered Jan. 22 in Round Rock, Texas, to honor the lives of Baylor’s Immortal Ten.

The day marked the 90th anniversary of the bus-train collision in Round Rock that claimed the lives of 10 Baylor students on their way to a basketball game against the University of Texas.

Following a dedication ceremony in the City Hall Council Chambers, hosted by the mayor and city council members, participants made the short walk over to the newly named Immortal Ten Bridge—located on Mays Street in downtown Round Rock over the railroad tracks where the accident occurred. Baylor students, staff members, yell leaders and Bruiser the Baylor mascot joined city leaders, community members and family of the students on the bus for the event.

A $100,000 donation from Union Pacific helped the city update the bridge, which was constructed in 1935.

The improvements included green and gold striping, green light poles and plaques to honor the students who were killed in the 1927 collision.

“The lives of the young men who died were short but not meaningless,” Round Rock Mayor Alan McGraw said at the event. “They’re still having an impact on our lives today.”

The Mays Street bridge was built as a direct result of the crash. It was the first railroad overpass constructed in Texas in a statewide initiative to eliminate all railroad grade crossings on highways by requiring the construction of overpasses or underpasses.

McGraw described the Immortal Ten Bridge as a way of connecting the lives of those who died in the wreck—as well as the 12 men who survived it—to today’s communities in Waco and Round Rock.

“These are not just names on a plaque,” McGraw said. “They were lives, they were family members, they were friends, and they were members of the community.” 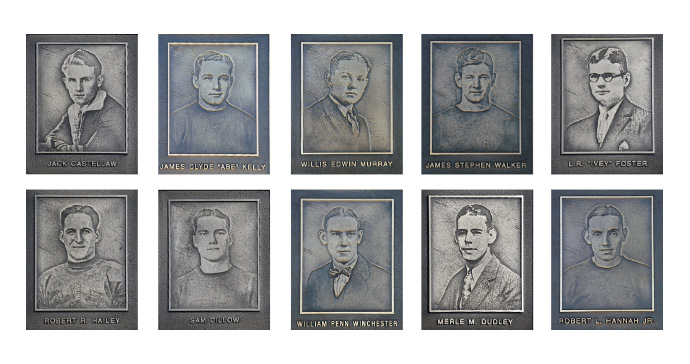 Relatives of the Immortal Ten, including more than 25 belonging to Jack Castellaw’s family, and descendants of the 12 survivors participated in the ceremonies.

“As the son of a survivor of the accident, I know every day I am alive because of God’s will,” said Jim Gooch, a 1962 Baylor graduate whose father, Ed Gooch, AB ’30, was the only survivor among the young men sitting at the back of the bus. “The permanence of the memorial demonstrates Round Rock’s wishes to always be associated with the memory of the Immortal Ten.”

The bridge stands as a complement to the Immortal Ten memorial on Baylor’s campus in Traditions Square, between Pat Neff Hall and the Bill Daniel Student Center. The memorial consists of four life-sized bronze statues in front of a bas-relief panel of the remaining six students.

At the conclusion of the dedication ceremony, relatives shared memories of their loved ones with others as they examined the plaques commemorating the Immortal Ten. The attendees included several family members of Merle Dudley, a law student and yell leader who died in the accident.

“I’m his niece, and his great-niece and great-great-niece are here,” Sue Dudley Holloway of Round Rock told one of the local television stations covering the event. “We were just remarking that the picture really shows a family resemblance.”