Not much was expected of Baylor volleyball in 2016 by those outside the program. The Bears were picked to finish seventh in the preseason Big 12 Conference coaches poll in their second season under head coach Ryan McGuyre.

Expectations waned even more so in the weeks leading up to the start of the season as starters Shelly Fanning--a preseason All-Big 12 selection--and Tola Itiola were ruled out for the year because of injury. 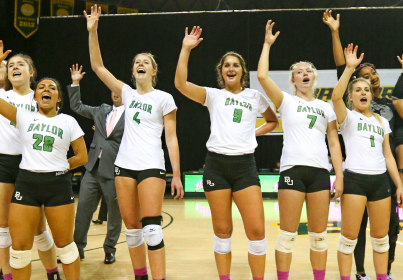 However, Baylor proved doubters--and, perhaps, themselves--wrong. The Bears posted a 22-12 record, including a 9-7 mark in Big 12 play, and received an NCAA Tournament selection for the first time since 2011 after tying Kansas State for fourth in the final conference standings.

"I'm so proud of this team this year," McGuyre said. "The number of wins, the battles, the five-set victories we've had, the way we've pushed our opponents all year. It was a special team for me. They inspired me. I catch myself being discouraged at times. When you see their resiliency, when you see them back in the gym and working hard, it has me making sure we as a coaching staff are giving them our best. These girls are fun to be around. You can't not enjoy it."

Baylor's season started sluggishly as the Bears worked to find the right mix of players with two starters absent. A tough five-set loss at No. 13 Florida State--where McGuyre previously was associate head coach--in early September dropped Baylor to 4-4. But the Bears gained confidence from going toe-to-toe with one of the nation's top teams.

What resulted was a 10-match winning streak that included wins against Washington State and Kansas State, both of which were ranked at the time. The Kansas State victory, which opened Big 12 play, was bittersweet, though, as the Bears lost another starter--middle hitter Jaelyn Jackson--to a season-ending injury.

Nonetheless, the Bears continued to battle and remained in the top four of the conference standings throughout the season. Baylor finished with an above-.500 record in Big 12 play for the first time since 2009 and only the third time since the league's inception.

Fittingly, Baylor's second-round opponent this season was again UCLA. The Bears battled the Bruins, but UCLA walked away with a straight-set victory, ending Baylor's season.

Baylor returns all but two letterwinners--one starter--next season, including rising senior outside hitter Katie Staiger, who earned American Volleyball Coaches Association (AVCA) second-team All-America honors. She is the first player so honored in program history. Staiger was a unanimous first-team All-Big 12 selection and earned AVCA first-team all-region honors. She tallied 698 kills, a Baylor single-season record and two shy of the Big 12 record, and was among the national leaders in kills per set all season.

"We learned something about ourselves this year," McGuyre said. "We learned how to battle and fight. That hard work has to come first, that trust has to come first. We're going to get a healthy Shelly, a healthy Tola, and healthy Jaelyn and some great recruits coming in, as well as the fire and hunger and disappointment in not being able to move forward from the girls who return."