Informal polls of Baylor fans over the past six months regarding who would be tabbed as the Bears' next football head coach would have included an ever-growing list of possible candidates. It is unlikely Matt Rhule would have appeared on any of those lists. 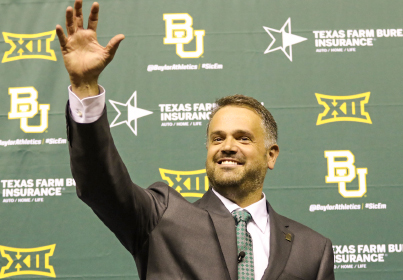 However, he was at the top of Baylor Director of Athletics Mack Rhodes' list to lead the Bears forward. Rhule, head coach at Temple University the past four seasons, was introduced at a Dec. 7 press conference.

"Baylor is a special place, and it deserves a special coach," Rhodes said. "Matt Rhule is a committed Christian. He is a man of great integrity, great work ethic, a man that has an insatiable appetite for greatness and for excellence, to always be the best, a person that can relate with all walks of life."

Breaking through boundaries is nothing new for Rhule, 41, who was born in New York City, where his father, Dennis, was an urban missionary through a church near Times Square. Meanwhile, his mother, Gloria, worked with at-risk women and children. The family moved to State College, Pennsylvania, when Rhule was a teenager, and he later walked on as a linebacker at Penn State, earning Academic All-Big Ten honors in 1997.

Rhule began his coaching career at Albright College in Reading, Pennsylvania, before stops at the University at Buffalo (1999-2000), UCLA (2001) and Western Carolina (2002-2005). His first stint at Temple was as an assistant coach from 2006 to 2011, rising to assistant offensive coordinator and recruiting coordinator. Rhule then spent a season as an assistant for two-time Super Bowl champion head coach Tom Coughlin with the New York Giants before returning to Temple as head coach in 2013.

"Matt's a phenomenal football coach and an even better person," Kansas City Chiefs head coach Andy Reid said. "He'll bring great integrity to Baylor University and a great work ethic. He's a top-notch person and a relentless recruiter. My hat's off to Baylor; they brought on board one of the best young coaches in the game."

Rhule led Temple to the 2016 American Athletic Conference title after a 34-10 victory over 19th-ranked Navy in the AAC Championship Game. It was Temple's first conference title since 1967 and the Owls' second consecutive 10-win season, completing the best two-year run in the program’s 123-year history. Temple had only one 10-win season prior to 2015.

"He changed the culture at Temple, a perennial doormat," ESPN anchor and Temple alumnus Kevin Negandhi said. "He's the epitome of what you want in a college football coach. He's committed to representing the right things about a university, and Baylor hired an authentic person to shape young men and deliver results in the community."

"I have watched Matt for the past 15 or 16 years as he has developed into one of the top young coaches in America," Teaff said. "Matt is a perfect fit for Baylor and is truly an outstanding coach of strong, positive character traits. Baylor is clearly on the way back with this selection."

Rhule was greeted by a crowd of more than 2,000 fans at his introductory press conference in the Ferrell Center. With the passion and vigor of a preacher, Rhule addressed the gathered Baylor fans and those watching from afar. He said his decision to accept Baylor's offer was a calling.

"We've gone wherever we've been called to go," Rhule said. "I'm here very simply to develop and work with these young people. I'm here to coach football, and I'm here to be the best partner that I can for Baylor."

Rhule, whose father also was a high school football coach and his uncle is in the Pennsylvania High School Coaches Hall of Fame, laid out a plan for Baylor football moving forward.

Rhule's 2016 Temple squad held opponents to 275.9 yards per game, the nation's third-best average behind only Alabama and Michigan. The Owls tied for eighth nationally in scoring defense (17.2 points per game) and held opponents on average to 10.41 points below their season average.

Jim Grobe, who served as Baylor's acting head coach for the 2016 season, coached the Bears in the 2016 Motel 6 Cactus Bowl against Boise State, thus allowing Rhule to focus on recruiting and putting together his staff.