When Scott Drew was a member of his father's coaching staff at Valparaiso University, the Crusaders struggled to land quality post players. Therefore, Drew’s father sent him overseas.

"About half our team was international, and most of our big players were international," Drew said. "We had players from Latvia, Croatia, Finland, Colombia, Puerto Rico, Angola. You name it, we did a lot internationally."

Drew has recruited internationally so heavily during his coaching career that his passport gets worn out.

"The last time I had to get a new passport, I had 53 different stamps," he said. 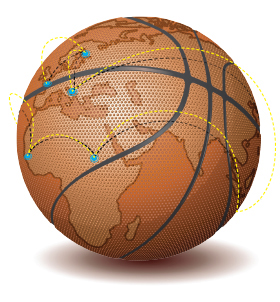 Drew brought that ability to find talent abroad with him when he was named Baylor's head coach prior to the 2003-2004 season. His first international players included guard Aaron Bruce from Horsham, Australia, and center Mamadou Diene from Dakar, Senegal.

Bruce earned Freshman All-America and Big 12 Freshman of the Year honors in 2005, sparking a collegiate career in which he scored more than 1,300 points and led the Bears to their first NCAA Tournament appearance in 20 years as a senior. Diene, a Freshman All-Big 12 honoree in 2006, finished his career as one of the best shot-blockers in program history. His gregarious personality made him a fan favorite, leading to his nickname of "The Mayor."

Other international players have followed, including the dynamic Canadian duo of guards Brady Heslip (Oakville, Ontario) and Kenny Chery (Montreal) who became known as the "Eh Team."

"You're in a family atmosphere that is warm and welcoming," Drew said. "International students have been able to get over the homesickness and find a new home away from home."

Lecomte, who played two seasons at the University of Miami, found it easy to fit in at Baylor.

"We have people from all over the world at Baylor," he said. "I have friends here that are regular students from France, Asia, everywhere. It was a pretty easy transition for me."

Meanwhile, Lual-Acuil Jr. has found Baylor to be a perfect fit for him in terms of basketball and personally. He was born in Wau, South Sudan, some 17 years before the country gained independence from Sudan in 2011, and moved to Australia at age 7. His father currently is South Sudan’s minister of humanitarian affairs and disaster management.

"I've received a lot of love," said Lual-Achuil Jr., who was baptized weeks before the beginning of the season. "Baylor definitely has helped me with my faith. Being here and being around people that follow Christ, it has helped me open up and be able to commit my life to Christ."

Lual-Acuil Jr. said Drew's background with international players was a big draw for him coming to Baylor from Neosho Community College in Chanute, Kansas.

"There's an adjustment period everyone goes through when coming from overseas," Lual-Acuil Jr. said. "Coach Drew understands an international player can't really hit the ground running. He gave me confidence to know that eventually I'll get to where I need to be."

"It's such a global game now," Drew said. "We're so traditional in the United States where 20 years ago, anyone 6-foot-5 and taller, we'd put in the block. Internationally, they had a lot of 6-foot-10 guys shooting 3-pointers and handling the ball."

"We play differently," Lecomte said. "When you're not used to that, you may not understand. Coach Drew is great because he knows and has that experience."