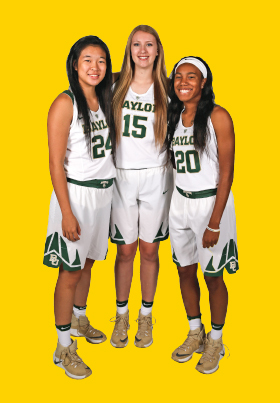 The three Lady Bear freshmen who make up the nation's top-ranked recruiting class likely will be before their time in the Green and Gold is through. The trio brings a wealth of talent to the women’s basketball program, with a mindset to help them handle the expectations that come with the label "No. 1."

"They're all three winners," head coach Kim Mulkey said. "They come from winning backgrounds and are very competitive and coachable. I find that their knowledge of the game sets them apart from other freshmen."

Cox, named the nation's top-ranked recruit by ESPN last year, understands expectations. The 6-foot, 4-inch forward has always been a focal point for teammates and opponents alike, whether in high school--where she was the Texas Gatorade Player of the Year in 2015 at Flower Mound--or with the USA Basketball Under 19 team--where she helped lead the team to a gold medal in Russia. Cox looks to continue Baylor's long line of strong post play.

She also knows firsthand what it takes to overcome adversity. Cox found out she had type-1 diabetes when she was 7 years old and constantly manages her blood sugar throughout practices and games.

"It's an everyday thing for me," Cox said. "I can't take a break from it, but I've been competing with it. It's been challenging sometimes, but it's also something you learn how to manage."

Chou, a 6-1 shooting guard from Plano West High School played with Cox on the USA Basketball Under 19 team. She built a name for herself with an accurate 3-point shot and ability to play both guard positions. Ranked as the No. 8 player in the nation by ESPN, Chou averaged 22 points and 4.8 rebounds as a senior.

Basketball is in her bloodlines. Her mother, Quanli Li, played for the Chinese National Team before moving to the U.S. Chou credits her mother for instilling a love for basketball in her and challenging her to perform at her best.

"My mom is my best friend. She taught me everything I know," Chou said. "People would say she was tough on me, but she was preparing me for this level. She told me that nothing comes easy in life and that people aren't going to just give you what you want. You have to work for it. I’ve lived by that."

Calveion "Juicy" Landrum was a regular at Lady Bear basketball camps and games as a basketball-loving preteen girl growing up in the Waco area. Before she was an ESPN top-40 national prospect, Landrum led LaVega High School to a state championship. She is also known for her nickname--acquired, she says, as a chubby toddler who would "just wobble around."

Now, Landrum describes her game as "smooth." The 5-9 guard can play both backcourt positions and gets her teammates involved, averaging 6 assists per game as a senior. She was drawn to Baylor by her experiences with the team and coaching staff as a youngster.

"Coach Mulkey made me want to come here," Landrum said. "I'd been to games and watched Brittney Griner and Odyssey Sims, and saw that she is one of the best teachers in the country. I initially wanted to try somewhere out-of-state, but I couldn't pass up the opportunity to play for her."

All three hope to make an immediate impact, which would be no small feat on a team ranked No. 2 in the AP preseason poll.

"It's certainly in the plans (for them to play right away)," Mulkey said. "They're a versatile group of freshmen who are learning more about the game every day, and I think they’re going to have outstanding careers here at Baylor."