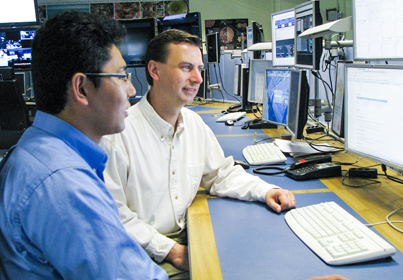 Two Baylor physics professors are part of the research team with the Large Hadron Collider (LHC) at CERN near Geneva, Switzerland, where the Higgs boson particle was observed in 2012.

Dr. Jay R. Dittmann came to Baylor in 2003 and was tasked with starting a high-energy physics program. At the time, he was working with the Collider Detector at Fermilab (CDF) experiment in Illinois.

Dr. Kenichi Hatakeyama joined Dittmann at Baylor in 2009. He previously was a post-doctoral fellow at Rockefeller University, where he worked on the Compact Muon Solenoid (CMS).

Dittmann and Hatakeyama joined the LHC experiment in 2010. Founded in 1954, the CERN laboratory was one of Europe’s first joint ventures and now has 22 member states.

Theories and discoveries of thousands of physicists since the 1930s have resulted in a remarkable insight into the fundamental structure of matter: everything in the universe is found to be made from a few basic building blocks called fundamental particles, governed by four fundamental forces.

The best understanding of how these particles and three of the forces are related to each other is encapsulated in the Standard Model of physics, which was developed in the early 1970s. It has successfully explained almost all experimental results and precisely predicted a wide variety of phenomena. Over time and through many experiments, the Standard Model has become established as well-tested physics theory.

Dittmann: A muon is one type of particle that we can detect with the LHC. It happens to be built in such a way that its particularly good at detecting muons. The solenoid is a special type of magnet. It's difficult to appreciate how large this detector is. The circumference of the tunnel underground where the LHC lies under the French-Swiss border is 27 kilometers around. This whole device is used to detect particles produced in collisions that happen at the very center. Protons enter from two opposite directions. The protons circulate and collide right in the center, and those collisions are what interest us as physicists; particles are produced and fly off. It's like when you have two cars collide in an accident; except that when cars collide, car parts fly off in different directions. When particles collide, all sorts of new stuff flies off. They are traveling with such high energy that the energy itself can be turned into massive new particles. That's something Albert Einstein predicted. If you were to take two pieces of fruit--two strawberries--and threw them at each other and the collision produced bananas, grapefruits and blueberries. This whole detector is specially designed to detect the different types of particles going in all directions. It surrounds the center point where the collision takes place. If some energetic particle comes from that collision, then these different layers of the detector see it, so to speak. It's not something we see with our eyes; there is kind of an electric signal.

What is the Higgs boson particle?

Dittmann: If something only happens one in a billion times, and you want to see evidence of it, you need billions and billions of collisions; we didn't have enough at Fermilab. Having a higher energy for the proton collisions makes the Higgs boson more likely to be produced, as well. That is one advantage of the LHC.

Why is it called the "God particle?"

Hatakeyama: In the Standard Model, there are many other particles: six leptons, six quarks--those are the 12 fermions--and four bosons. These were all observed and known, but the Higgs boson is different from any of those in terms of its properties and it has a very important role in that it defines the mass of all the other elementary particles. It has a very special role in our particle physics theory. That's why it is called the "God particle," because it defines all the other particles.

To what extent did you or Baylor have a hand in the Higgs boson discovery?

Dittmann: There may be 3,000 people working on the CMS experiment, but we felt very much a part of this discovery. It's exciting. Everyone has his or her specific tasks, and university groups gain a particular expertise with certain things. Dr. Hatakeyama was involved with a group that studied missing energy, which was one key ingredient for the discovery.

What do you hope to observe following the next scheduled collision (spring 2017)? What can you reasonably expect?

Dittmann: One of the main things that we’ve been searching for here at Baylor is something called supersymmetry, which is one theory that predicts a whole set of additional particles that double the number of known elementary particles. This theory solves outstanding questions about the Standard Model. Unfortunately, so far, there is no experimental evidence of it. But each year, we're able to probe a little bit more because we have more data that we've collected. A couple years ago, the energy of the collider increased, which allowed us to search in new ways, but we need to see. We're poised to be able to study the new data and see if there are hints of supersymmetry.

Do discoveries such as the predicted Higgs boson--or, hopefully, one day, supersymmetry--function more as answers or questions?

Hatakeyama: These discoveries complicate things more. (Laughs) Right now, we say the Standard Model is complete with the Higgs, but there are still more unanswered questions that the Standard Model cannot address. I have enough things to learn, and I will not get bored at any point in my lifetime.

Dittmann: We're not going to run out of things to investigate anytime soon. The more we learn about the universe, the more astounded I am at how complex it actually is and how little we really do understand. As we learn more, we're not really getting any smarter, but the reason we do this is because we do feel like we have certain abilities and interests that just fit well with the pursuit of science and it excites us to do it. We feel like we're able to contribute to this international endeavor and get younger people involved, like Baylor students, who gain a lot from being at these laboratories and interacting with other students from all over the world.

What does your work at CERN mean for physics broadly?

Dittmann: What would revitalize science again in this country would be a very unexpected discovery in particle physics. The Higgs boson was a big deal, but it wasn't a surprise; we were looking for it. It was predicted in the '60s, and we have the capability now to actually measure it. But it has been a while since we’ve discovered something unexpected. The '60s and '70s were a time of many such discoveries, and funding was abundant, and I think it has been harder in recent years because what we measure simply matches so well with the Standard Model.