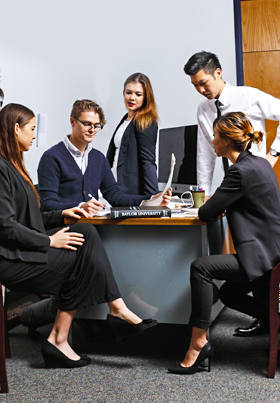 "It's a great time to be at the Lariat," said senior Gavin Pugh, spring 2017 Lariat editor in chief. "With the staff that we have, we are consistently putting out quality content that is getting recognized nationally. It's especially encouraging in regards to my future career.

I know the work that my peers and I are putting forward is going to benefit all of us in the long run."

Six print and electronic Baylor student publications are ranked in the national Top 10, five are in the Top 4 and four are No. 1 in the nation. Early in 2016, the New York-based Columbia Scholastic Press Association (CSPA) named baylorlariat.com the No. 1 college newspaper website in the country and baylorfocusmagazine.com the No. 1 college news magazine website in the country.

In Atlanta in October, the College Media Association named the Baylor Lariat smartphone app the No. 1 App of the Year for college media.

"As editor of the 2016 yearbook, winning first in the nation was an amazing feeling and a testament to the hard work that we put in to producing it," junior Hannah Neumann said. "More than that, coming back as editor this year, it has driven me and my new staff to be focused and dedicated, so that we can meet that same standard this time around."

The Lariat added broadcast reporters to the newsroom in 2013.

In a first for the 116-year-old campus newspaper, the Lariat received three Emmy nominations and earned its first television Emmy from the Lone Star Chapter of the National Academy of Television Arts & Sciences for a sports video.

Baylor is the only university in the nation to win CSPA Crown Awards in all three print categories of newspaper, magazine and yearbook, and it accomplished this feat in both 2015 and 2016.

The Lariat and baylorlariat.com were named first in Texas for overall excellence while Roundup and Focus earned the most points to win Sweepstakes at the Texas Intercollegiate Press Association's 2016 annual conference. The Lariat also was named the best college daily in the state by the Associated Press Managing Editors of Texas.

"We have an engaged professional staff that sets high standards of excellence and then invests the time to coach our students to achieve that level of excellence," said Paul Carr, director of student publications and lecturer in the Department of Journalism, Public Relations and New Media in the College of Arts and Sciences. "We encourage our students to do their best work every day. We don't settle for average or 'good enough,' but coach them on how to do a better job tomorrow."

Pugh said, "Working for such a distinguished publication like the Lariat is such a rewarding experience. Not only do we consistently rank nationally, but we push each other to produce a better paper. Everyone in the newsroom is passionate about what they do, and it is the best team I could ask to work with."