The long road to Baylor 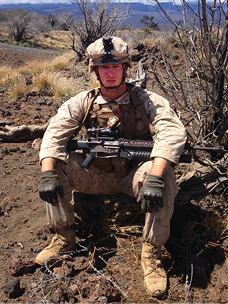 Business major Kyle Boyd--a 6-foot, 2-inch, 230-pound freshman linebacker on Baylor's football team--made a promise to himself and his friends, and it's a promise he is keeping.

Boyd had 116 tackles and four sacks as a senior at Horn, leading the Jaguars to the 2010 Texas Class 5A Division II Region II finals for the first time in school history. With a full scholarship in hand at a football school on the precipice of newfound heights, Boyd instead opted for the Marine Corps.

"It was a weird path that I took, but it was a calling," Boyd said. "I needed to put my football dreams on hold and serve my country."

Despite numerous people urging Boyd to reconsider his decision, he stood by what he felt in his heart and enlisted following high school graduation. He chose infantry but had to wait nine months for a position to open. Boyd reported to Marine Corps Recruit Depot in San Diego in mid-March 2012 for three months of basic training.

"There were a lot of nights during boot camp when I laid there and thought, 'I should have listened to those people,'" Boyd said. "It was tough sometimes, thinking I could be playing college football, I could be getting my degree. But I have a lot more to show now that's not on paper: experience, maturity. It was tough, but I'm glad I did it."

Boyd was stationed in Oahu, Hawai`i and served there for three years before being given the option of completing his duty ahead of schedule. He was honorably discharged Oct. 1, 2015.

"It was an opportunity for kids that wanted to go back to college," said Boyd, who left the Marines as a corporal. After presenting documentation that he planned to enroll at Baylor, he was ready to being "a new page" in his life.

That new page included keeping a promise Boyd made to high school friends who supported his decision to join the Marines.

"I'm doing this mostly for them," said Boyd, who enrolled at Baylor during the summer and finally joined the Bears' football program. "I'm doing it for myself, but I made a promise to them that I would go and play when I was done in the Marines."

Boyd is not alone at Baylor, where more than 130 active duty and veterans currently are enrolled. This includes undergraduates, graduate students, online MBA students and law school students.

"It's been a change," Boyd said of returning to the academic world. "I didn't handle as much as a piece of paper and a pen for four years. We were infantry, so we didn't have an office or anything like that. Going back to college has been surreal. When I walk through the football facilities, when I walk across campus, to think about where I was a year ago and where I am now, it's awesome. I'm thankful, so proud to be here and happy to have the opportunity."

Boyd said the training he received in the Marines has benefited him since enrolling at Baylor, both as a football player and as a student.

"The military is about time management, but I've had to manage it in a different way--give myself time to study, make sure I get good sleep before tests," he said. "Sitting in a classroom for an hour at a time wasn't what I was used to, but I've adapted well."

Five of his non-immediate family served in the military, including a great uncle who received two purple hearts during the Vietnam War. Boyd said his three-plus years of military service made him a better man.

"It matured me in so many different ways," he said. 'Sometimes, we'd go weeks without showers or beds. Little things like that, I don't take for granted anymore, especially with all these nice facilities at Baylor. It has made me thankful for every opportunity I have."