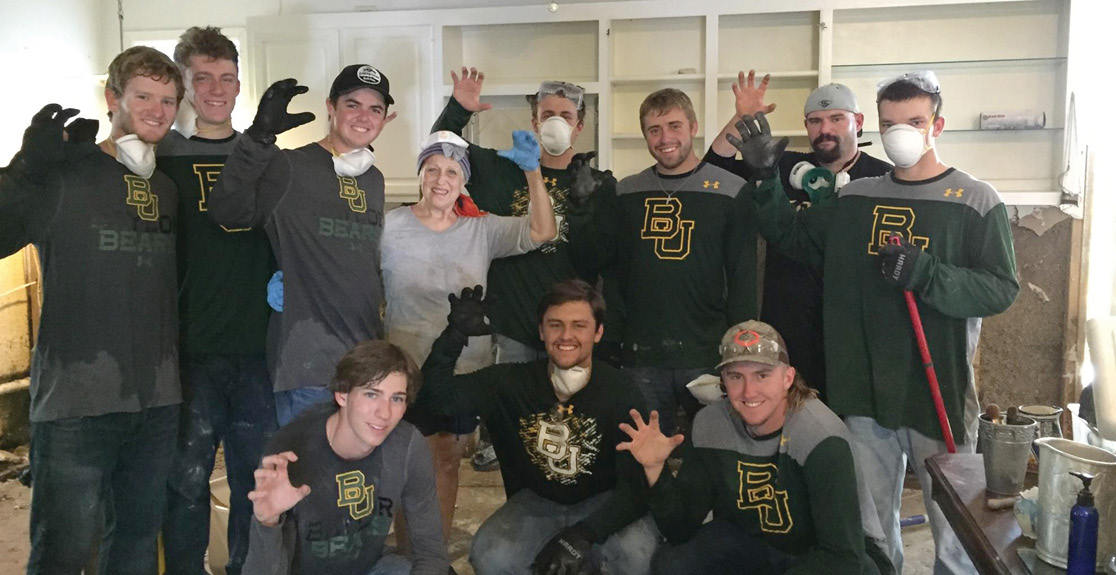 Over Labor Day weekend, the Baylor softball and baseball teams saw firsthand the devastation left behind after the torrential mid-August rainfall that led to unprecedented flooding in areas around Baton Rouge, La., and its suburb, Denham Springs, and impacted more than 40 Louisiana parishes. The Bears and Lady Bears went to Louisiana with a purpose--to serve flood victims by doing whatever work they needed.

The Baylor Athletics relief efforts began in late August when women's basketball head coach Kim Mulkey, a Hammond, La., native, donated a trailer filled with more than $35,000 worth of school supplies to flood-stricken Tangipahoa Parish, where she grew up. Softball head coach Glenn Moore, who held the same role at Louisiana State University prior to coming to Baylor, lived in Denham Springs while coaching there. Baseball head coach Steve Rodriguez was connected to a local church in Baton Rouge through his home church in Waco, Antioch Community Church. All saw the incredible need in Louisiana and took it as a call to serve.

"Your heart went out to the people there, seeing it on the news," Moore said. "We had the idea to go down and help, and the administration was incredibly supportive. It grew from there. Our athletes really responded to the idea to serve people who were in need in an unbelievable situation." 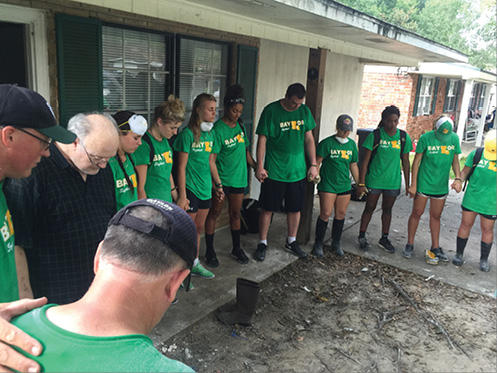 The teams bussed to the hard-hit areas and split up to work in numerous houses in and around Denham Springs, where an estimated 90 percent of all homes were flooded, as well as neighboring areas in Baton Rouge. They ripped out drywall, stripped tile, pulled up carpet, moved heavy household items and did whatever they could do alleviate the burdens of people who, in many cases, had lost everything and were forced to wait for outside help amidst the devastation. The softball team also took more than $15,000 worth of relief supplies and $8,000 in cash donated by Baylor supporters and members of the Waco-area community, all of which were given to local residents and organizations serving them.

"It was overwhelming to see the flood's impact," Kelsee Selman, a senior pitcher for the softball team, said. "We weren't sure exactly what to expect. We'd seen pictures, but we'd never been around a flood before. People were forced to live in partially torn-down houses with their household items piled so high you couldn't always see houses from the street. But the people were so inviting and so loving, they were a blessing to us."

Between the two teams, more than 70 players, coaches and staff members worked in dozens of houses, interacting with families affected by the flooding. Many had lost nearly everything, and the majority of those impacted by August rains were without flood insurance.

"It was humbling to walk into someone's house and see what had happened," Rodriguez said. "You look outside at the piles of what used to be the contents of their homes--that was their life, their family memories, everything they'd known all out on the curb waiting to be taken away. It was emotional for all of us. I was impressed with our guys and their desire to serve. It was nonstop work, and they really stepped up to serve the families we saw."

"Seeing that kind of need, people who had lost everything, was difficult," Moore said. "You feel bad, because the need is so great, and what we could do was relatively small. But it made a difference to people. Our girls were really motivated by seeing what had happened to our neighbors there. I've never been more proud of a team. God has sent us some incredible blessings to represent Baylor. It's the same with the baseball team--phenomenal kids with a real heart for others."

The trip to Louisiana brought back memories for senior baseball catcher Matt Menard, a native of Bridge City, Texas, situated along the Gulf Coast. As a high school freshman, his home was flooded with three feet of water after Hurricane Ike. It was a perspective that made it all the more meaningful to serve those in Denham Springs.

"I could relate a little to what they were dealing with," Menard said, "and it was great to let them know they weren't alone, that someone was there to help them. It was amazing; everyone there was all smiles to us, even with what they’d been through. They were wondering where to start with all the work each day, and we could be there with 40 guys who could help them."