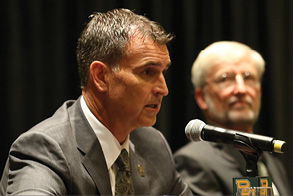 Mack Rhoades is definitely more of a glass-half-full kind of guy. What others might view as challenges, Baylor’s new director of athletics sees as opportunities.

That's why the 50-year-old Rhoades left the University of Missouri after only 15 months to take over a Baylor program that includes 19 intercollegiate sports and 550 student-athletes.

"My last three years (at UTEP), we had some opportunities to leave three different times," he said. "But it came time, finally, when it was time to go out on our own. I thought (Akron was) certainly committed to having a successful athletics program--one, in terms of developing young people; and two, in terms of winning championships."

Among his hires at Akron were the school's all-time winningest women's basketball coach (Jodi Kest) and a soccer coach that won a national championship (Caleb Porter).

In six years at the University of Houston, Rhoades got the chance to "start from ground zero" and build infrastructure and new areas within the athletic department.

"A new plan, new coaches, staff, personnel, facilities--everything from ground zero," said Rhoades, who hired Tom Herman as the football coach at Houston before taking the job at Missouri. "If you surround yourself with great people and you have a vision and you work together and everybody understands and knows that vision and holds each other accountable, you can do some great things."

Rhoades says it was bittersweet leaving Missouri after a short time, because "we had begun to start implementing a bunch of our strategic initiatives, and now you don't get to see those through."

"Certainly, it had its challenges, but I'm grateful, thankful, proud of how we handled those challenges," he said. "Missouri is in a really great place right now and poised to do some great things in the future. For me to leave Missouri, it really needed to be a special opportunity, a great institution, great people. I think the sky's the limit for Baylor University, and that’s why we chose to head down to Waco."

Mack and his wife Amy have three daughters, Nicolette, Natalie and Noelle.

"I think sometimes in this business we do an unbelievable job of overcomplicating things," Rhoades said. "My job as an athletic director is to really provide our head coaches with the necessary resources so that they can be competitive, so that we can develop young men and young women. And we will never, ever, ever compromise that. That will be our No. 1 mission."