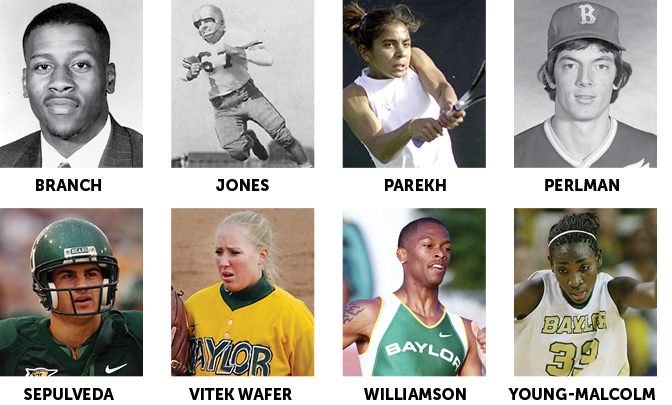 The Oct. 14 induction ceremony will include Wall of Honor recipients Jay Allison (football; 1975-77), who also serves as a Baylor Regent, and Bill Glass Sr. (football; 1954-56), who was the program's first unanimous All-American in 1956.

Branch, BA '00, was a two-time All-Southwest Conference selection and ranks seventh on Baylor's all-time career scoring list with 1,666 points. He played several seasons overseas before spending eight seasons as a member of the Harlem Globetrotters. Branch, who was known as "Hot Shot" with the Globetrotters, finished his Baylor career as the program's all-time leader in career 3-pointers (267).

Jones, BBA '49, MSEd '51, served three years in the U.S. Navy during World War II before returning to Baylor. He was All-SWC and co-captain of the Bears' 1948 team that defeated Wake Forest in the Dixie Bowl, the program's first bowl appearance. Jones, who earned bachelor's and master's degrees from Baylor and coached 36 years throughout Texas, will be honored posthumously.

Parekh, originally from Mumbai, India, was Baylor's first women's tennis All-American and led the Lady Bears to three straight NCAA Tournament appearances. She established a then-school record with 39 singles victories as a junior, and she became the program's first three-time All-Big 12 selection as a senior. Parekh, BA and MAcc ’02, finished her career 88-28 in singles and 62-31 in doubles. She is the first women's tennis inductee.

A former walk-on, Perlman, BBA '79, led Baylor to back-to-back College World Series appearances in 1977 and 1978. He won 19 career games for the Bears before becoming Baylor's first Major League Baseball first-round draft pick when he was taken 12th overall by the Chicago Cubs in 1979. He appeared in parts of three Major League seasons with the Cubs, San Francisco Giants and Cleveland Indians.

Sepulveda, BBA '06, came to Baylor as a walk-on linebacker and left as one of the greatest punters in college football history. A three-time All-American and two-time first-team Academic All-American, he was the first two-time recipient of the Ray Guy Award, presented annually to the nation's top punter. Sepulveda was a fourth-round draft pick of the Pittsburgh Steelers in 2006 and spent four seasons with the franchise before knee injuries forced an early retirement.

Vitek Wafer, BBA '06, established numerous Baylor and Big 12 records during her time with the Lady Bears. She was a first-team All-Big 12 selection and finalist for USA Softball National Player of the Year as a junior in 2004. Her most memorable game was a 1-0, 16-inning shutout of North Carolina in the 2004 NCAA Tournament in which she established an NCAA record with 28 strikeouts, a mark that still stands. Vitek Wafer tallied 74 wins and 759 strikeouts in her Baylor career.

Young-Malcolm, BSEd '06, led the Lady Bears to their first national title as a junior in 2005. A three-time All-Big 12 and two-time All-America honoree, she is one of only four women in NCAA history to eclipse 2,000 points, 1,000 rebounds, 300 steals and 300 assists in a career. Young-Malcolm was Big 12 Player of the Year as a senior before being the fourth overall pick in the 2006 WNBA Draft. She was a nine-time all-star with the San Antonio Silver Stars and scored more than 4,300 points in her nine-year professional career. 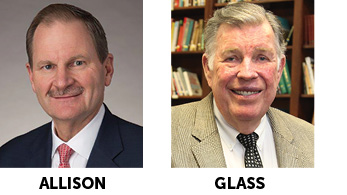 Allison earned three degrees from Baylor (BBA '78, MS '80, JD '81) and has served as chairman and CEO for Comstock Resources Inc. since 1987. He and his wife have established three endowed scholarships at Baylor and were the lead benefactors for the Jay and Jenny Allison Indoor Football Practice Facility and Basketball Hall of Honor.

Glass, BA '57, was a first-round NFL draft pick and spent 11 seasons with the Detroit Lions and Cleveland Browns, earning Pro Bowl honors four times. He is a member of the College Football, Texas Sports and Baylor halls of fame. Glass attended Southwest Baptist Theological Seminary and began a prison ministry--Bill Glass: Behind the Walls--in 1969.

Baylor's Athletics Hall of Fame was established in 1960 and recognizes former student-athletes whose achievements and contributions have enriched and strengthened the university’s athletics programs. Student-athletes are eligible to be considered 10 years after completion of their collegiate eligibility.

The Wall of Honor annually recognizes Baylor letterwinners and graduates who meritorious accomplishments in public or private life following graduation have brought positive public recognition, credit and honor to Baylor and its athletic department.

With this year's class, the Baylor Athletics Hall of Fame has 220 members, while 23 people have been added to the Wall of Honor.