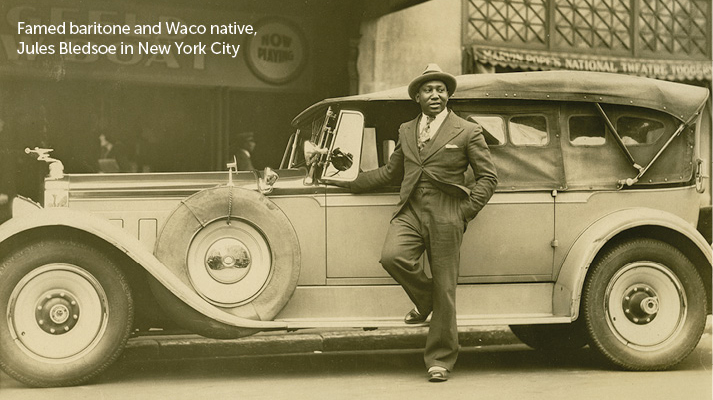 The photos highlight men and women from a variety of fields, including education, athletics, agriculture, entertainment, industry, business, politics, medicine and law. The earliest photo shows seven men graduating from medical school, and the most recent photo is a silver gelatin print of Oscar DuConge, Waco's first black mayor.

"Everyone, regardless of age, loves a story," said John Wilson, associate dean for special libraries and director of The Texas Collection. "These incredible photographs taken from several of our archival collections are a brief moment in the lives of African-Americans in Texas. Their stories are rich and inspiring. These images illustrate the depth and diversity of African-American culture in Texas. These men and women were professionals and laborers all trying to make better lives for themselves and their families."

In 2016, after examining 17 other African-American collections, a five-member committee was assembled to choose the photographs that "best represented the lives and accomplishments of African-Americans in Texas," according to the Baylor University Libraries website.

"One of the primary goals of this exhibition is to attract new donations of African- American archives and to build bridges into the African-American community," Wilson said.

The photo exhibit opened in August and will continue through December in The Texas Collection, located in Carroll Library on campus. R&B guitarist Classie Ballou was featured during the opening reception.

When the Smithsonian Institution's National Museum of African American History and Culture (NMAAHC) opened Sept. 24 in Washington, D.C., an exhibit featuring African-American musical history will include materials from a Baylor University search-and-rescue mission to save recordings from the "Golden Age" of American black gospel music.

An interactive display featuring The Old Ship of Zion, one of the key recordings of Baylor's Black Gospel Music Restoration Project is among the highlights of the permanent exhibit, called Musical Crossroads.

"Having this music that the team has worked so hard to preserve featured in the museum is beyond wonderful," said BGMRP founder Robert F. Darden, professor of journalism, public relations and new media in Baylor's College of Arts and Sciences.

The opening coincides with the 10-year anniversary of the project, begun at Baylor to identify, acquire, preserve, digitize and catalog recordings from the black gospel music tradition. Many of those recordings, from the era of 1945 to 1975, were vanishing as albums made the transition to CDs. While albums by such legends as Mahalia Jackson were readily available, only a few by lesser-known greats were.

The project was launched shortly after The New York Times published an op-ed in February 2005 by Darden, who lamented the vanishing number of classic releases from the Golden Age. While contemporary gospel was thriving, "Each day, irreplaceable master tapes deteriorate, get lost or are simply tossed out," wrote Darden, former gospel editor for Billboard magazine. "It would be more than a cultural disaster to forever lose this music. It would be a sin."