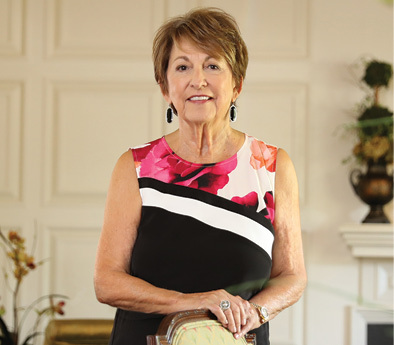 More than 125 Baylor Bears--and counting--can thank Jane Meyer for the chance to attend Baylor and earn their degrees with scholarships from various foundations, such as the Passport to Success Foundation, an education foundation Jane and her husband Paul J. Meyer started in 1988. By establishing scholarship and endowed funds, the couple created a lasting impact for Baylor generations to come.

"Baylor has just been a home for us, and since Paul got involved with the young people and wanted to give scholarships, it has been really special to us," says Jane, who over the years has invited students to her house so they could see Paul [who died in 2009] and his personal museum. "Getting to know some of the kids that we have helped support still makes me feel like a very big part of the Baylor family. I have yet to meet a young person who wasn't worth sponsoring."

Jane is president of The Paul and Jane Meyer Family Foundation, which the couple created in 1984 to "provide resources to carry out the work of the Great Commission by investing in Christian mission ministries, charities, and needy individuals that they might, in turn, impact our world for Jesus Christ."

Because The Meyer Family Foundation’s mission so closely aligns with Baylor’s purpose, they consistently invested heavily into Baylor.

"Neither of us went to Baylor, but we definitely have adopted it. An investment in Baylor is an investment in Christian education," she says. "Paul and I talked about this a lot and knew that God had empowered us by giving Paul the ability to make money, and we both had the same vision.

"We knew that God wanted us to be good stewards of whatever he gave us. Paul spent many hours at The Boys and Girls Club listening to the reasons these young people thought they would never be able to go to school; many of those who accepted the offer from Paul not only got a degree through the Passport to Success Program but also later helped others go to college."

The Meyer family also has celebrated more than a dozen Baylor graduations among their children and grandchildren, including granddaughter Brooke. This past summer, she received her diploma on the floor that bears her grandfather's name, the Paul J. Meyer Arena in the Ferrell Center.

"Baylor was all we talked to them about," Jane says. "Most of them lived in Waco and were part of all Baylor activities, so it was natural."

Both Jane and Paul overcame hardships in their youth. The youngest of four children, Jane was born in Killeen, Texas, and moved at age two with her family to a farm, where her father soon died in a tractor accident. With her brother serving in the military, Jane's mother moved Jane and her sisters to Temple, where Jane finished high school before going to a business school in Waco.

Paul Meyer was born and raised in Campbell, California, by immigrant parents who lived in a tent before Paul was born. By age five, Paul was working in orchards and vineyards alongside migrant farm workers. His work ethic and discipline helped him set records in harvesting fruit, in fitness contests while serving in the military, and in business as he increased a company’s sales by 1,000 percent in just a couple of years, becoming a millionaire by age 27.

In 1958, Paul moved to Waco from Florida to work in sales at Word Inc. under Jarrell McCracken, the former Baylor classmate of Dr. Bill Hinson, Paul's former pastor in Florida. Hinson later was special assistant to Baylor president Herbert Reynolds from 1986-89.

"Dr. Hinson encouraged Paul to start his own business, saying 'You are happiest when you are helping people reach their goals in life. Why don't you start a company with that as its purpose?'" Jane recalls.

By 1960, Paul had started Success Motivation Institute (SMI), which under his groundbreaking leadership became an innovative juggernaut in the personal development industry. It was the same year Paul met Jane.

"After I finished business school, a dynamic young man moving from Florida offered me a job with his first company, SMI. That was the turning point in my life. I worked for Paul for 11 years before we were married," Jane says.

With both Paul and Dr. Hinson now in Waco, it opened the door to many areas where Paul could be more involved at Baylor.

Just as he did in the world of business, where he helped motivate millions of people to reach their full potential, Paul spoke to many classes and individual students, providing them encouragement and wisdom.

SMI and following ventures have earned sales approaching $3 billion while revolutionizing the personal development industry in more than 70 countries and 27 languages. SMI is now the parent company of more than 40 companies worldwide.

The Meyer Family Foundation has given more than $75 million to assist the youth, elderly and needy in Central Texas, only occasionally going outside the area. Jane's foundation continues to support access to quality education at Baylor, most recently through a $2.5 million gift of the Paul and Jane Meyer Conference Center at the Paul L. Foster Campus for Business and Innovation. The Meyer Conference Center houses an interactive catalogue of speeches and other materials drawn from Paul Meyer's career.

The Meyers made sure someone will always teach Christian scriptures at Baylor by creating The William M. Hinson Professor of Christian Scriptures at Truett Seminary. They donated a building for use as a student-athlete residence hall.

Jane has received numerous honors, including the W.R. White Meritorious Service Award and Alumna Honoris Causa, the highest honor bestowed upon one who does not hold a Baylor degree.

Without Jane and Paul's adoption of Baylor, scores of students would not have had the opportunity to reach their full potential as they worked to fulfill God’s calling on their lives on campus.

"I believe Baylor University is the best venue for integrating the life and leadership lessons that are the legacy of Paul Meyer," says Jane, who is also in the process of leaving quite the legacy herself.