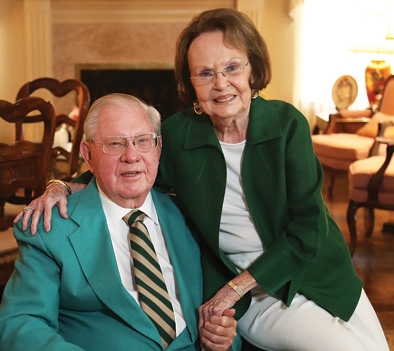 Carroll and Aline Webb's dedication to their alma mater is demonstrated as much in their presence as it is in the generosity they've displayed to Baylor for decades. Their desire to serve Baylor was so strong that in 1992 they left their hometown of Dallas to move to Waco so they could easily help out wherever needed.

"I attended my first Baylor football game in 1937," Carroll says, "and knew from the time I was 10 years old it was where I wanted to go. It's a wonderful place, the kind of place you want to give back to and help others attend as well."

Their individual Baylor stories go back long before they met. Ten years apart, they both attended Highland Park High School in Dallas and went on to choose Baylor over schools closer to home. At Baylor, both persevered through challenging circumstances as students on the way to earning their degrees.

Just three months after he began taking classes at Baylor, the attack on Pearl Harbor compelled the United States to war and Carroll, like many in his generation, heeded the call to serve. He enlisted in the Navy and continued his education in Louisiana while readying himself for service abroad. In 1944, he was shipped to the Pacific and served on a crew transport at Iwo Jima and Okinawa. On Feb. 23, 1945, he was looking through binoculars from the deck of his ship and witnessed one of the most iconic moments in American history--the raising of the flag on Iwo Jima. Months later, he was preparing to go to Japan when the war ended. Gratefully, he soon found himself returning to Baylor to finish his accounting degree instead of staging a landing on Japanese shores. After receiving his BBA in 1947, he joined the prestigious accounting firm Deloitte & Touche, where he spent nearly 38 years before retiring as the managing partner of the company's Dallas office.

Aline faced a challenge of a different sort during her sophomore year. After arriving at Baylor in 1951, her father suddenly died. Aline wanted to help her grieving mother however she could. She decided the best way to help would be to accelerate her class schedule and graduate early. As an education and English double major, she knew she could find a good teaching job in Dallas and help support her mother. Determined to help as quickly as possible, Aline graduated a year early and quickly embarked on what would become a 30-plus year teaching career.

The Webbs' stories came together in the early 1980s. After his wife Frances died, Carroll and Aline were introduced by mutual friends at Park Cities Baptist Church. The couple married in 1982. Their longtime love of Baylor even shaped their wedding date--an off-weekend for Baylor football.

"I knew what I was getting into," Aline says with a laugh, remembering Carroll's desire to avoid a conflict with a Baylor game 34 years later. "And when Carroll suggested moving to Waco 10 years later, I knew, too. It's a great place and we had a lot of great friends here, and I knew we could help."

In their 25 years back in Waco, the Webbs have served in numerous ways, from serving on the Hankamer School of Business advisory board and leading fundraising drives to serving students and supporting scholarships. Carroll, a longtime member of the Bear Foundation, was honored recently for raising over $1 million for the organization. Other honors include the 2006 Milton T. Gregory Distinguished Service award, given to development volunteers who go above and beyond for Baylor and induction into the Baylor Athletics Hall of Fame. But, he says, their proudest contribution to Baylor is a scholarship he started with help from colleagues at Deloitte & Touche as he approached retirement--The Deloitte & Touche/Carroll L. Webb Accounting Scholarship.

"My colleagues in the Dallas office got together when I was approaching retirement and started this, because they knew how much I loved Baylor," Carroll says. "They put money in initially, and I pledged to continue giving. But my initial contribution was $800. That was December of 1984. We’ve been blessed that other people have contributed as well. But the market value of that scholarship, from my $800 and the gifts of colleagues and friends, has grown to over half a million. Every year, we get letters from students who receive it, and I've kept every one of them. It's going to keep on going."

Now aged 93 and 83, respectively, Carroll and Aline remain spry, with a vigor that belies their years.

"It's like I've told my pastor," Carroll says. "I'm prepared to go when the Lord calls. But I ain't ready to go just yet. We love being a part of things here at Baylor. We've been blessed with good health, and there's a lot more we can still do."