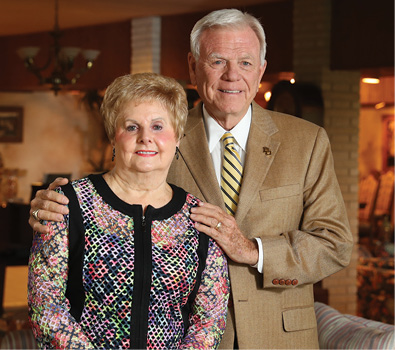 As a Baylor student in the late 1950s, Don Riddle, BA'60, never envisioned a career as one of Texas' top trial lawyers. A journalism major, his goal was to write the news, not make news himself. His grades might also have deterred him from imagining life as a practitioner of the law. Don laughs now as he remembers being far more interested in playing games than pouring over textbooks and notes.

"I loved every minute of my Baylor experience," Don says. "I didn't want it to end. I didn't do very well as a student, but I made a lot of friends at the pool hall and baseball field and had a lot of fun."

His jaunty memories, however, belie an attribute he displayed as a young man: leadership. Riddle spent four years as an infielder with the Baylor baseball team and was named captain of the squad his senior year. After college, he spent nearly six years with the U.S. Marines and earned the Leatherneck Award as Platoon Honor Man after boot camp in San Diego. These experiences helped sharpen a quiet confidence in himself that served him well as he changed careers and later served clients as a lawyer.

"One of the most important things to me that I've tried to express to my children and grandchildren," Don says, "is confidence. Put aside your fears, get up and do something. Be a part of something. To say it another way, 'you can't steal second with your foot on first.'"

His law career developed from a suggestion by his wife. Don and Jenny met while both were working in Midland, Texas, in 1962, and they married a year later. When his employer, the YMCA, suggested he go to Chicago to continue his education, they both knew a change was in order.

"Understand, I didn't even have a coat," Don says. "Neither one of us wanted to go to Chicago. She suggested, 'why don't you let me work and you go to law school?' That's how it got started."

Jenny's suggestion led them to Houston, where Don began attending law school. As he studied, Jenny worked to support them, having been promoted to serve as secretary to the vice president of Shell Oil.

"There were months it was tight," Jenny remembers. "But I had a good job, and we really enjoyed those three years. We met wonderful people and things really worked out."

Don took a job with the well-known Brown, Kronzer, Abraham, Watkins and Steely firm in Houston, eventually becoming a partner. In 1974, he organized the firm of Riddle, Murphrey, O'Quinn and Cannon and continued to build a name for himself in the Houston legal community. Along the way, he even found himself relying on some of the skills he picked up in his Baylor journalism classes.

"The parallels between the skills I learned in journalism and used as a lawyer were innumerable," Riddle says. "A good writer has to know what the story is--not just the who, what, when, where and how, but get to the heart of the story here. Ask good questions. You have to be able to do that as a lawyer, too."

In his five decades in the legal profession, he has been honored with dozens of awards and recognitions, including being named one of the top 20 trial lawyers in America by Forbes magazine and a Super Lawyer of Texas by Texas Monthly. He won numerous high-profile cases. For Riddle, however, it's often the less-known cases that bring the most satisfaction.

"I just get a big thrill out of helping individuals," he says. "I have represented corporations too, but that's not nearly as big of a thrill of working with a fellow human to help them. That's the biggest form of excitement for me, aside from winning."

As his career blossomed, Don never forgot Baylor. He and Jenny showed their appreciation through gifts and an extended family legacy. Jenny and their children, Stacy Riddle Baumgartner, BA '89, and Todd, picked up on his love for Baylor, and Stacy chose to follow in her father’s footsteps to his alma mater. Her choice was clearly meaningful for Don, but was just as special to Jenny, who had long ago felt a part of the Baylor Family and was happy to have her daughter as a part of it--and to have her close by for regular trips to Waco.

"We got to meet so many of his friends and baseball teammates from his Baylor years, and we’ve gone to football games and other sporting events for years," Jenny says. "And I got to become familiar with Baylor. So it was meaningful for me, too, when Stacy chose Baylor. The people there are so wonderful, and I was able to get very familiar with her friends and roommates, which was very important to me. What's very special is that so many of her friends from Baylor, just like Don's, remain very, very good friends today."

The oldest of their five grandchildren is a sophomore at Baylor this year, and Don says he hopes to influence others to come, as well.

The Riddle name is another tangible sign of their love for Baylor. Through their Riddle Foundation, they provided a major gift to fund the Stacy Riddle Forum, which provides meeting spaces to sororities on campus. They also have supported numerous other scholarships and facilities, such as the Sheila and Walter Umphrey Law Center, and founded The Ken Howard Music Scholarship to honor a teacher who made an impact when Don was a student growing up in Waco.

"Baylor is a great educational product, and we hope what we've been able to do has paid off for students," Don says. "It definitely has paid off to us because we've heard from many of the recipients. We're very pleased to be able to make gifts and contributions. They've all been very modest compared to many of the Baylor donors, but the little that we’ve done has given us a great deal of happiness and satisfaction."