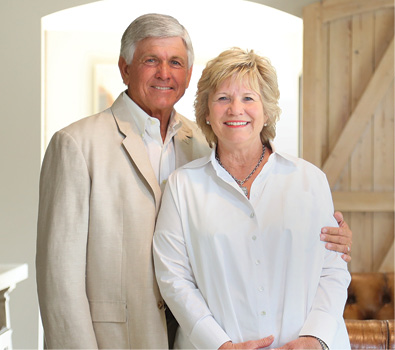 From babysitting bears and building a mountain for strength and conditioning coach Kaz Kazadi, to spreading school spirit and attending to medical needs on Baylor’s sidelines, Claude and Becky Lindsey are serious contenders for the title of supporting Baylor in the largest variety of ways.

Growing up in nearby China Spring, Claude and Becky Lindsey's attendance at Baylor football games at an early age prompted them to become Baylor lifers.

"We grew up Baptist and loving Baylor," says Claude, whose mother attended the University. "Becky and I were in RAs and GAs, and with 50 cents we could come to Baylor Stadium, because we couldn't afford the regular-priced tickets."

No one can question the Lindsey's commitment to the green and gold. During some of the lean years of Baylor football, Lindsey Contracting--the family construction business--would buy 500 tickets for the UT games and give them to employees...just to keep orange out of the stadium.

"We're passionate about athletics because that's where a lot of people are first introduced to the university, just like we were," says Claude, who was president of the family business for over 40 years. The Lindseys and their sons, Ryan and Russell, built the company into a 350-employee organization until selling it to Oldcastle Materials in 2011.

Although she did not start the Baylor Spirit Program--where local businesses are given Baylor flags and promotional materials to support the university--Becky personally signed up more than 300 businesses.

"I did it just to try to put a little more green and gold in Waco and promote school spirit," says Becky, whose support also extended into the Lindsey's business. Employees who showed up to work with clothing supporting universities other than Baylor found out quickly that it wasn't allowed.

"We used to give our workers Baylor caps to replace what they had on, but now we see those same people buying green and gold because they support Baylor," Becky says.

Evidence of the Lindsey's love for Baylor extends well beyond athletics.

"Not everybody knows this, but we kept the live bear mascots, Lady and Joy, on our ranch while they remodeled their facility on campus," Claude says. "They didn't want anybody to know where they were, and we housed the bears for about a year and a half. It was fun."

The Baylor Chamber of Commerce continued to take Lady and Joy to the ranch for regular walks after their new facility was completed.

"We got Baylor fans of the year that year, and I got real tickled because everybody was wondering why," Becky says.

Over many years, the Lindseys have been generous to Baylor, donating asphalt work for residence hall parking lots and athletics facilities, including paving Grant Teaff Plaza at Floyd Casey Stadium, where they also donated the recruiting center. They contributed a riding arena at the Willis Family Equestrian Center and a court in the Hawkins Indoor Tennis Facility. The Lindseys are members of the 1845 Society, the Bear Foundation and Barnabas Circle, among others.

Lindsey Contracting performed site work, underground utilities, and/or paving all over campus, including at Baylor Law School, Baylor Sciences Building, McLane Student Life Center, and virtually every athletics facility from 1988 to 2011. The company received the 2006 Greater Waco Chamber of Commerce Business Award in 2006.

"Since we sold our business, we didn't get to do any work on McLane Stadium, and I've grieved about that," Claude says.

The Lindseys have always been the kind of supporters that when someone from Baylor calls, they try to make it happen. The 2007 Alumni by Choice recipients would donate their projects in-kind to the university, and then also give their profits back to Baylor.

"Guy Morriss [former Baylor coach] once wanted a sand pit for the linemen to run in. When Kaz Kazadi got here, he wanted a mountain built. We kept hauling more material in and he was like, 'I'm gonna need it higher,'" Becky laughs. "He'd run the team there to get everybody in shape."

"Mike is a real jewel for Baylor, and not many know how important he is in his field," Becky says. "The trainers work so hard and perhaps they don't get the recognition that they deserve. Claude and I have adopted them and we do everything that's possible to help them through the year."

The couple has endowed The Rebecca and Claude Lindsey Athletic Training Scholarship, and they showcase the athletic trainers in the Homecoming parade in their green 1951 Chevy pickup when the game start time allows. Both the Athletics Training and Women's Tennis programs bestow annual student awards named in Becky Lindsey's honor.

In 2012, Becky found herself in a fight with cancer. The thought of missing time with Baylor football inspired her to get back on the sidelines as quickly as she could.

"If it hadn't been for the football program, I probably wouldn't have resolved to work as hard as I did," says Becky, who soldiered on the sidelines between chemo treatments despite feeling awful.

"One game in Oklahoma, the wind was blowing about 40 knots, and Becky was in the middle of chemo and was wearing a wig under a baseball cap," Claude recalls. "Some of the players called her Momma, and she told [former football player] Cyril Richardson, 'If my cap blows off, my hair is going with it. Somebody better be out there jumping on it.' Cyril tells her, 'Don't you worry, Momma, I got you.'"

Many of Claude and Becky Lindsey's undertakings have been outside of the spotlight, but their lifelong love for Baylor is visible across campus. Their ceaseless contributions have been absolutely critical to the Baylor family, to the lives of so many students and to the wellbeing of student-athletes.