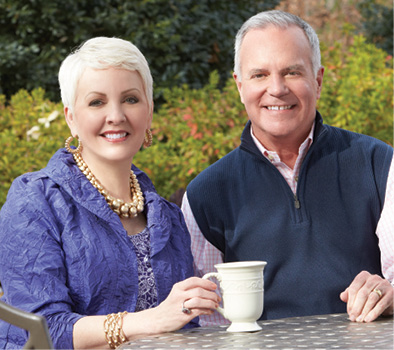 Steve, BBA '73, JD '75, and Penny, BA '73, Carlile's story is a picture of long-term commitment. They met at the age of 12, became high school sweethearts, chose Baylor together and were married shortly after graduation. They returned to their hometown of Marshall, Texas, after graduation. There, they built a life for themselves and others through their business and charitable endeavors.

"We've been very fortunate to be able to live in one place pretty much all of our lives," Steve says. "You see the opportunities and needs because you're there. It's the same thing with our relationships at Baylor. We're still friends with people who knew us when we were 18 years old and professors who taught us 40 years ago, and we've stayed close to the university. We've found real advantages to that kind of longevity. When you're in something for the long haul, you can see opportunities and solutions occur that don’t happen if you don’t stick with it."

It seemed preordained from a young age that the Carliles would attend Baylor. Both of their fathers, Quinton Carlile, BBA '47, and Charlie Flowers, BBA '43, as well as three of Steve's uncles, were Baylor alums. A family history wasn't the only tie that brought them here together--as high school sweethearts, they didn't want to attend separate colleges.

Though their degrees were in accounting and teaching, Steve and Penny discovered an entrepreneurial spirit. They returned to Marshall after law school and joined the family oil and gas company. But, in 1990, they felt a different kind of call in business. After selling their oil and gas business, they prayed about how they could best use their funds in a God-honoring manner. The answer to that prayer was the beginning of a passion for job creation that would empower future employees.

"We just felt called to provide jobs and opportunities. If you have the ability to put capital to work to create opportunities for other people, then we think it's important to do that," Steve says. "If you're blessed financially, we don't think it’s wise to just sit on it. We feel it honors God to help the community and help others. We think that's part of why we were put on this earth--to create jobs, help people find jobs and then support them in those jobs."

They purchased a local pottery company and expanded it to a retail store, creating a need for more workers. But they knew a retail store wasn't by itself large enough for their vision and sought a next step. In 1996, they founded Home & Garden Party, a direct sales company featuring home decoration and party supplies, to provide a supportive company for women to work in whatever stage of life they found themselves.

"We were really led to help women, especially those who didn’t seem to have as many opportunities for them," Penny says. "Whether they needed to stay home with children, hadn't been able to go to college or had dealt with any other number of things in their lives that kept them from succeeding as they hoped, we hoped that coming on would provide them with a successful job and opportunity. We had a lot of women, and some men and couples get involved."

Home & Garden Party eventually merged with another company and was renamed Celebrating Home. The Carliles sold Celebrating Home last year, but continue their legacy of business ownership through an oil and gas company, numerous online retailers and real estate holdings.

In fitting with their long-haul philosophy, the Carliles have given generously to the places that shaped them. In Marshall, they donated funds to rebuild the city park, which had fallen into disrepair, invested in downtown redevelopment and helped form an initial Marshall Boys & Girls Club which has grown to over 10 clubs in the area. Their love for their hometown was passed to their sons, Clay and Lance, BBA '02, MBA '04, both of whom returned to Marshall to raise their families after college.

At Baylor, they have given back through scholarships for business students, engineering students and East Texas natives who choose a Baylor education. Beyond the students who have benefitted from their giving, a tangible sign of their benevolence at Baylor is the beautifully landscaped Steve and Penny Carlile Plaza outside the Paul L. Foster Campus for Business and Innovation. The Carliles’ longtime friendship with Hankamer School of Business Dean Terry Maness led to the opportunity to support the plaza.

The business school is a new landmark at Baylor, but to the Carliles, it's also a symbol of how long-term commitment to a community, both financially and through one's presence, can make a major difference.

"Think of the Foster Campus," Steve says. "Terry Maness and others have been planning for this for many years. He has been here and invested in this place. If we had many different deans, then maybe we don't have a new campus. But he's been here and built something. Those relationships built, and the longevity that Baylor people have together, makes an impact. If you're not invested in what you're doing or where you’re called to go for the long haul, you're may not reach as many solutions because it takes a while to get there sometimes. For us, being a part of Baylor University and our home in Marshall for so many years has really been a blessing and encouragement to us."