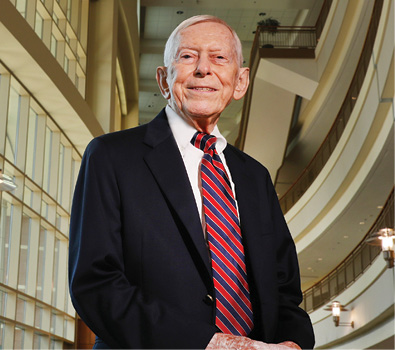 As a teenager in the Midwest, Dr. Roger Kirk had aspirations of becoming a professional musician. His goal was to play trombone in a major symphony. This dream led him to The Ohio State University, where he earned a Bachelor of Science in Music. However, his professional ambition was not to be.

"I got an inkling when I was finishing my bachelor's degree," Kirk says. "I would get C's and D's in trombone but A's in all the other courses. After earning a master's degree in music, I finally realized that I really didn't have a lot of musical talent. I needed to find something else that I could do with my life."

"God gives all of us talents; it just took me longer than most people to find mine," he says.

Indeed, Kirk did find his life's calling. He completed his studies at Ohio State with a Doctor of Philosophy in experimental psychology.

While Kirk lacked musical performance skills, he possessed an abundance of research and teaching skills--traits that would propel him for the rest of his life. Many decades later, he is one of the most decorated and respected professors in Baylor University history. Kirk, who is Distinguished Professor of Psychology and Statistics, has been named Outstanding Tenured Teacher in the College of Arts and Sciences and been designated a Master Teacher, Baylor's highest teaching honor. In 2012, Baylor named him the Cornelia Marschall Smith Professor of the Year, and he was named 2015 teacher of the year by the American Psychological Association (APA).

The list of honors, awards and commendations achieved during Kirk's career is as lengthy as his Baylor tenure, which began as an assistant professor of psychology in 1958. His first book, Experimental Design: Procedures for the Behavioral Sciences, is in its fourth edition and became a citation classic. Kirk has authored four other books, including Statistics: An Introduction, and over 125 scientific papers.

Despite a distinguished research and writing career, Kirk's main passion is teaching, with which he fell in love immediately when he taught introductory psychology as a graduate student at Ohio State.

"Teaching is something you work at and try to get better and better and better; that's always been my goal," Kirk says. "What can I do this year that's better than what I did last year? I'm always trying out new teaching ideas so my teaching never gets stale."

Kirk never imagined he would spend nearly six decades at Baylor. He had never been to Texas prior to joining the Baylor faculty, but friends spoke very highly of the Lone Star State. Kirk decided to give it a try and fell in love with Waco and the university.

"I enjoyed the Christian environment and the caring environment," he says. "I came out of Ohio State. There, the faculty didn't really care that much about the students. They were more concerned with their research; teaching was more of a sideline. When I came to Baylor, teaching was all important. That changed my mind about being here."

Aside from a one-year stint as a visiting professor at Seinan Gakuin University in Fukuoka, Japan, in the mid 1970s, Kirk never left Baylor. Shortly after returning from Japan, he found another reason to never leave.

With a desire to reconnect with his music roots, Kirk asked his friend in Baylor’s music school, Mary Ellen Proufit, if she knew of any "interesting new women faculty" who had joined the music school while he was in Japan. Proufit insisted that he meet piano professor Jane Abbott. Following a first date at Poppa Rollo's, they fell in love and married in 1983.

The couple have become icons on campus among the Baylor faculty and beyond. They fell in love with ballroom dancing in the early 1990s and continue to regularly teach ballroom dancing. They share a love of music, dancing and teaching.

"My wife and I get up every morning and think, 'Gee, we get to teach today,'" Kirk says. "That's happiness."

In class, Kirk constantly monitors the body language and expressions of his students. When he notices glazed-over eyes and slumping postures, Kirk uses psychology to get them reengaged.

"In the middle of a lecture, I'll do a cha-cha step. That never fails to get their attention," he says. "Or I'll talk about Jane. They're fascinated by that. I'll talk about our relationship and what makes a great marriage. I've got them back, and now I can talk about statistics again."

The link between psychology and statistics has been an integral part of Kirk's career. Psychology, he notes, is a science that is concerned with developing new knowledge.

"Statistics is the critical component that is used in designing experiments, collecting data, analyzing data and determining what the data tells you about a research question," Kirk says. "With the greater emphasis on research here at Baylor, statistics is a key component of that process."

Kirk says his passion for teaching has never waned. He realized early in his career that it is what he is meant to do.

As for his first passion?

"I live music through my wife," he says. "She practices piano every morning. I'm shaving, she's practicing. When we go into a music building, the unique sounds in the building still rekindle special memories. I live my original passion through Jane."