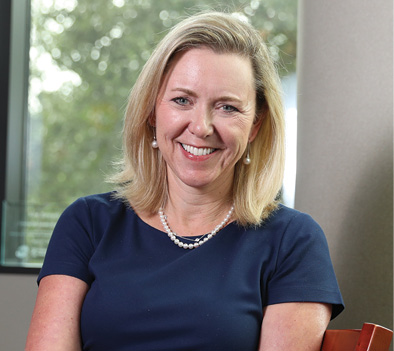 "It was pretty idyllic," Lubel says of life as a child in Kirtland. "I graduated with kids I was baptized with; that's how few people moved in and out."

Lubel says her vision of the world and career opportunities for women was limited as a child at the tail end of the Baby Boom.

Her horizons began expanding the summer after her junior year in high school when Lubel traveled to South Africa as an exchange student through American Field Service. She spent three months in a town about an hour from Johannesburg in a time when Apartheid was still the law of the land in South Africa.

"We were all Protestant kids from a fairly monochromatic town," she says. "To go to South Africa where they had all these challenges and the racial divides, I got an appreciation for the need to be expansive in how I looked at things."

Lubel left Kirtland for Miami University in Oxford, Ohio, where she earned a bachelor's degree in Spanish and international studies. She spent a year of her collegiate life in Madrid, Spain, where her horizons were broadened again.

Then, a mistake by the Central Intelligence Agency led to Baylor, where she earned a Master of Arts in international relations in 1987. While at Miami, she interviewed with the CIA and the Peace Corps, and she was told to expect a call after two days of interviews in Washington, D.C.

Meanwhile, Baylor accepted Lubel for graduate school. She waited for word from the CIA, but nothing came. So, she accepted Baylor's offer and moved to Waco.

"I had never been to Texas in my entire life," she says. "It was an opportunity to come down, get my master's, and get a little different experience behind me."

Three weeks after settling in Waco, Lubel, whose maiden name is Smith, finally received a call from the CIA.

"The CIA had the wrong Kim Smith show up for work; they pulled the wrong Kim Smith file," she says. "By that point, Baylor had gone out on a limb for this girl from Ohio, and I thought, 'I'm here; I have a sense of obligation to carry this through; let's see how the year goes and then go from there.'"

One year in Texas turned into several, and Lubel never again corresponded with the CIA. In her words, "Paths have diverged ever since." Lubel says her time at Baylor was a confidence booster.

"I didn't have any support system anywhere close by," she says. "I got a chance to really meet people from all over the place. The program was pretty international in focus. I got an opportunity to visit with people who came from all parts of the world."

It was recommended to Lubel in graduate school that she consider law school. She took the LSAT on a whim and did well enough to be accepted at the University of Texas at Austin. She credits her experience at Baylor as a major contributing factor in her legal career.

"I learned how to absorb a lot of school work while working one or two jobs," Lubel says. “How do I use my time wisely and really get all my deadlines satisfied and still live to talk about it? Also, when I moved to Texas, no one knew me and there were no expectations. Certainly, no one was saying I should be a school teacher or a nurse or anything else. My experience at Baylor allowed me to open my eyes to different opportunities."

After law school, Lubel worked for Fort Worth-based firm Kelly Hart and Hallman from 1991 to 1997, when she moved to San Antonio to work for Valero. She served in various executive capacities with Valero, including managing counsel and vice president of legal services, and executive vice president and general counsel. Lubel was the lead lawyer for nearly $20 billion in acquisitions that grew Valero from a regional refiner to an international energy company.

"Every step along the way, I had someone who was a mentor or a supporter for me, pushing me in that direction," Lubel says. "I've never been a ladder-climber. I'm not a career mapper. I've never been one to look for my next job, but rather embrace what I'm doing now and do it right."

Since 2011, Lubel has served as director of the board of oil and natural gas extraction company WPX Energy Inc. She was named to Fortune's 50 Most Powerful Women in 2013 and 2015, and she was named 2014 Retail Leader of the Year by Convenience Store News.

Years removed from her Kirtland childhood, Lubel tells her daughters what she would tell her 10-year-old self if given the opportunity.

"Never draw your box so tight that you can't get out of it," she said. "You don't know what's coming around the corner, what the opportunities are going to be."

To this point, CST Brands announced in mid-August a merger with Circle K, which is owned by Montreal-based Alimentation Couche-Tard Inc. The merger is expected to close in early 2017 and will open another chapter in Lubel's story.

"Follow what you love to do, and it will fall into place," she said. "We get caught up in trying to plan every step of everything. It's bound to fail because it never works out exactly as you planned. Take the right steps, and make sure you’re learning all along the way."