Medal of Service for Contributions to Research: Lisa Giocomo 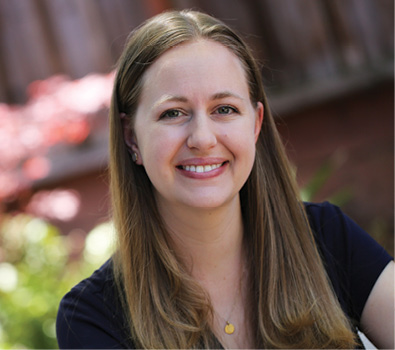 Baylor alumna Lisa Giocomo, BA '02, has always been interested in science but it was not until she was older that she realized a career in science was possible.

"I was always incredibly interested in the natural world," Giocomo says. "I was always outside, collecting rocks; I had a bunch of pets; I bred gerbils; I calculated how long it would take waterdogs to transform into salamanders."

Naturally inquisitive and precocious, Giocomo took an aquatics biology class in high school and became even more intrigued with science.

"At that point, I didn't know any scientists," she says. "I didn't have any experience with the collegiate level academia and research, so I didn't realize that was a career option."

Two decades later, Giocomo is among the nation's top neuroscience researchers, currently working as an assistant professor of neurobiology at the Stanford University School of Medicine in Palo Alto, Calif.

"Stanford is a really exciting place to be as a scientist right now," Giocomo says. "There is a big push in neuroscience and at Stanford toward interdisciplinary work, which really is the wave of the future."

Giocomo's recent research centers on the relationship between "compass" brain cells and those that tell a person when he or she has reached a boundary or specific place in the world.

Giocomo's lab aims to answer these questions by studying the genes, molecules and algorithms that generate the brain's map of space.

"Neuroscientists have spent decades in their particular domains in terms of techniques," she says. "With the renaissance of technology that has happened in the past 10 years in neuroscience, there is a strong feeling in the field that now is the time that our community has the traction to address some important, big-picture questions regarding how the healthy brain works and what happens in brain disease. I'm optimistic that we can make some real headway over the next decade or two."

Giocomo grew up in Highlands Ranch, Colo., along the southern rim of the Denver metropolitan area at the foot of the Rocky Mountains. She was drawn to Baylor due to the school's pre-med program, and she had a few friends from high school who attended Baylor.

"I'd gone to Texas when I was in high school for summer camp. I found Texas to be very appealing," she says. "My parents went to college in Colorado, and I really wanted to do something different."

Admittedly, she was not prepared for the temperature shift and tried early in her collegiate career to take only early morning classes so as to avoid the heat.

"But I adjusted by the next year," she says.

Giocomo says her academic experience was the highlight of her time at Baylor. She treasures memories of a class she took as a junior with professor Susan Spooner, who at the time was a Baylor psychology instructor.

"For the first time, I was able to start doing experiments with rodents. I found that to be an amazing experience," Giocomo says. "She was very influential to me because her office door was always open, and I would pester her with all these questions."

"His statistics class was a turning point for me in terms of my academic career," Giocomo says. "My freshman year, I struggled a little bit to find my footing in terms of what I was interested in. But that statistics course renewed my energy and my confidence in myself as a student. His teaching style was invigorating; it was clear and enthusiastic."

That academic resurgence propelled Giocomo to pursue a master's degree in psychology at Boston University where she worked with Dr. Michael Hasselmo.

"His particular approach was very hypothesis-driven and interdisciplinary," she says. "At the time, he was focused on memory and how different neural modulators or different brain chemicals influenced memory processing. I found that topic really interesting."

Giocomo stayed at Boston University and completed her PhD in neuroscience in 2008. Her post-doctoral work was with the Mosers at the Norwegian University of Science and Technology's Kavli Institute for Systems Neuroscience in Trondheim, Norway. She has been on faculty at Stanford since 2013.

"I pursued what I did because I found it intrinsically interesting," Giocomo says. "I found it immensely rewarding, and I am still very passionate about it."