Bestowed on Baylor graduates who have made a distinct contribution to their particular profession, business or vocation and in doing so have brought honor to Baylor 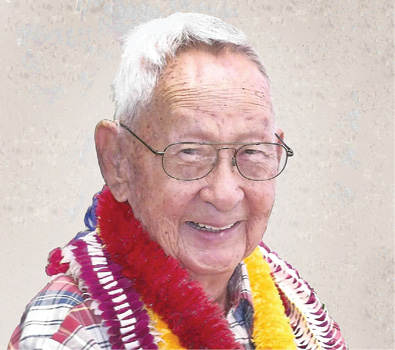 World War II veteran and longtime Judge Takashi Kitaoka, LLB '40, the 2016 recipient of the Distinguished Achievement Award, passed away Aug. 9 at the age of 104. Kitaoka, who was the first Maui-born circuit court judge with jurisdiction over Maui, Moloka`i and Lāna`i, was Baylor's oldest living graduate at the time of his death.

Born Feb. 1, 1912, in Hana, Maui, Kitaoka was the youngest of Toraki and Sada Kitaoka's four sons. His parents, who immigrated from Kumamoto, Japan, around the turn of the 20th century, worked in Hawai`ian sugar fields before opening a coffee shop in Kaeleku. His family lived in a two-bedroom home with a wood stove, an icebox and no running water or electricity.

Kitaoka attended Mid-Pacific Institute, a Christian boarding school in Honolulu where his brothers were also students. He majored in political science and sociology at the University of Hawai`i at Mānoa and graduated in 1934. Kitaoka received a Baylor Law scholarship through the auspices of Lloyd Killam, who was head of the University of Hawai`i YMCA. He began his studies at Baylor in 1937.

Far from home, Kitaoka quickly made strong connections with fellow Baylor Law students and his professors, who included Dean Thomas E. McDonald and the legendary Judge J.P. Alexander. He regularly visited his classmates' homes during semester breaks and holidays.

Kitaoka returned to Hawai`i in 1940 and was drafted soon thereafter. He served with the Hawai`i Army National Guard’s 298th Infantry until being dismissed from active duty and placed on reserve status in September 1941--hree months prior to the attack on Pearl Harbor. After the attack, he returned to active service.

In 1942, Kitaoka became an original member to the 100th Infantry Battalion B Company, the first Japanese-American unit to enter combat. His first service came in North Africa with the 34th Infantry Division, and his first combat was in Benevento, Italy, as the Allies began the bloody march up the Italian Peninsula. He was hospitalized due to a broken collarbone sustained in the Battle of Monte Cassino, which reduced the 100th Infantry Battalion B Company from 187 men to 28.

Kitaoka, who was awarded the Purple Heart and Bronze Star, later returned to the Anzio front and eventually fought into northern Italy and France when the 100th Infantry Battalion B Company merged with the 442nd Regimental Combat Team (RCT). In late October 1944, the 442nd RCT liberated Biffontaine, France, rescuing the "Lost Battalion" of the 36th Infantry Division after a fierce uphill battle.

Kitaoka was a part of the Nisei regiment, a group of second-generation Japanese-Americans who comprised the majority of the 100th Infantry Battalion B Company. Nearly seven decades later, in a Nov. 5, 2011, ceremony at the U.S. Capitol, Kitaoka and other surviving members of the Nisei regiment were awarded the Japanese American Nisei Congressional Gold Medal for their combat service in World War II. In all, the 100th earned nine Medals of Honor, three Presidential Unit Citations, 16 Distinguished Service Crosses, 1,703 Purple Hearts and 30 division commendations, making it one of the most highly decorated battalions of World War II.

At the war’s end, Kitaoka returned to the United States and was discharged from the Army. He lived in Chicago for a year with his wife Yuki before moving back to Hawai`i, where he worked for the Veterans Administration, as well as the Honolulu city and county prosecutor's office.

From 1960 to 1962, Kitaoka served as director of the Hawai`i Department of Labor. He was appointed to Maui’s Second Circuit Court by Gov. Bill Quinn in 1962 and served in that capacity until 1968. Kitaoka then went into private practice and later was appointed by Hawai`i Supreme Court Chief Justice William Richardson to head the newly formed Criminal Justice Data System, a position he held for five years before retiring.

"Judge Takashi Kitaoka's service to our community, state and country was an inspiration to all," Joseph Cardoza, chief judge of Hawai`i's 2nd Circuit, told the Maui News upon Kitaoka’s passing. “(He) demonstrated himself to be a person who truly committed his life to bettering our world. This legacy will live on in the history of our state and nation. For this, we remain truly grateful."

In 1977, a reception was held at Baylor in Kitaoka's honor. He met with classmates Clarence Guittard and J.C. Turner in Dallas during his visit to Texas for the event. Kitaoka also had the pleasure of meeting then-Baylor President Abner McCall when the latter made a stop in Hawai`i en route to Asia.

Kitaoka remained an active member of the 100th Battalion Veterans Club and served as the club's president for a period of time. In 2014, the Young Patriot's Club of Navy Hale Keiki School honored Kitaoka with the Heart of a Hero Award, recognizing his military service.

"He was a true public servant who dedicated his life to the people of Hawai`i and our nation," Hawai`i Supreme Court Chief Justice Mark Recktenwald told the Maui News. "He was known for his fairness, integrity and strong work ethic. The Judiciary ohana is grateful to Judge Kitaoka for his distinguished service."

Throughout his later years, Kitaoka remained a stalwart supporter of Baylor Law.

Yuki, Kitaoka’s wife of 72 years, passed away in 2013 at age 99. He was survived by his son, Lloyd, who serves on the board of directors for the 100th Infantry Battalion Veterans Club in Honolulu.