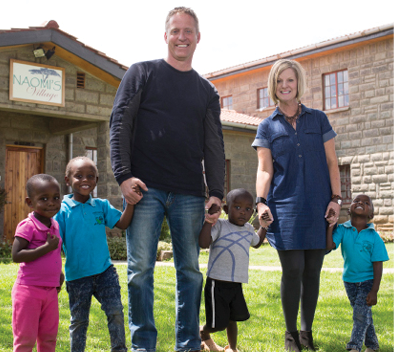 Thirteen years ago, Bob Mendonsa, BA '88, stared out an airplane window onto the African savannah below, pondering what he'd just witnessed on a month-long medical mission trip to Kenya. Soon, he would return his wife Julie, BS '89, and two young children and a successful orthopedics practice that represented the American dream, a life he and his wife had pursued since meeting at Baylor 16 years earlier.

But he couldn't shake his experience as an interim orthopedic surgeon in a land so unlike his own--individuals dealing with the kinds of suffering and poverty that had once seemed remote, but now he’d witnessed it firsthand. As the plane flew west over Kenya, a nation with more than two million orphans and an HIV crisis, Bob heard clearly God speaking to him:

"My creation is way more vast and beautiful than you ever imagined. Much of it is suffering greatly, and I care most that you do something about that and convince others people to do the same."

How would he respond?

Today, the Mendonsas run Naomi's Village, a children's home providing life-changing care for 68 orphans and counting in Maai Mahiu, Kenya. Their story of calling, uncertainty and, ultimately, faithfulness to leave their life in America and uproot to Kenya was documented in the Spring 2014 Baylor Magazine article "A Place To Call Home." In 2011, they opened Naomi's Village, partnering with churches, donors and locals to transform a barren tract of land into an exuberant village filled with dozens of young children, housed in facilities on their five-acre property designed to meet their physical, spiritual and emotional needs as if they were the Mendonsa's own children.

The stories of the children they serve are unimaginable--an infant found abandoned at the bottom of a latrine pit. A child who witnessed his mother and siblings murdered by his father, and dozens of other heart-wrenching tales. For the Mendonsas and their staff at Naomi's Village, merely providing them with a home was not enough.

"The typical model of the orphanage in Africa, which is essentially a rescue operation to fit as many children as you could under one roof, is failing," Bob says. "For the kids that came out, 70 percent of the boys went into crime and 60 percent of the girls went into prostitution. We want to not only provide shelter for the children who come to Naomi's Village, but also to help them be adults who are productive members of society."

To that end, Naomi's Village opened Cornerstone Preparatory Academy in 2013. Cornerstone now serves 540 students (both school-aged children from Naomi’s Village and students from the broader community) from kindergarten through eighth grade in a 30,000-square-foot campus. The school's motto is "change starts from within," which serves as a charge to both students and staff who pour into them to make a difference in the future.

"Kenya faces real challenges, and people from the Western world come over to help, and that’s great," Julie says. "But the lasting change is going to happen when people within Kenya are empowered. We always believe about our own kids in America that they can change the world. I believe that about our kids, Emma and Will, that the Lord will use them to make the world a better place. Well, we believe the same things about our kids at Naomi's Village and Cornerstone."

Bob envisions a generation of children raised with awareness of and compassion for the needs around them, with the leadership and understanding to make a difference.

"Why not raise up an army of kids who want to address problems like issue of two million orphans in their own country?" he asks. "We look to involve kids in service and to endow them with the responsibility to desire to help. It's not something you can make someone do. It's more caught than taught. That's where Cornerstone came in--there was a void in that before."

In addition to educating students about reading, writing and arithmetic, they take students on service projects to help them see the needs around them, and work to build leadership through courses and activities designed to help them live to the fullest God’s calling in their lives.

Many chapters of the lives of the children at Naomi's Village and Cornerstone have yet to be written, but that charge Bob heard on an airplane more than a decade ago--to do something about suffering and convince others to do so, too--might very well foreshadow the work these students could do someday, and perhaps have an impact far beyond what a family from Texas could ever hope for.

The Mendonsas have found that God rarely reveals what’s next for them more than a step or two ahead--what they’ve been a part of over the last 13 years would have been prohibitively overwhelming if they’d seen what was in store.

"I think if I sat here and told you that we understand the fullness of what God wants us to do, we would be thinking too small," Julie says. "Whatever steps He's got waiting for us five years from now, we're not ready for them yet. His plans are so much bigger than ours."