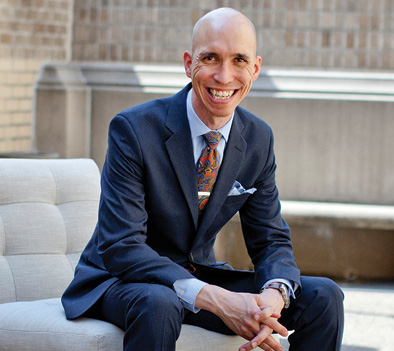 An expert bridge builder. That's what Jeremy Courtney is becoming in places where bridges have been smoldering for decades, and in some cases, for centuries. In addressing both emergency crises and long-term needs of people across Iraq and in Iran, Libya, and now Syria, Courtney has proven his commitment to innovatively solve some of the world's most complicated issues in areas most westerners would not dare to venture.

"A lot of what differentiates us from other groups is orientation," Courtney says. "It's not that no one else is delivering food or creating jobs for women who have been brutalized by ISIS; it's about the posture that we have, the assumptions, the core convictions that we have when we enter these places.

"We can work right alongside another organization, but the way we hand food to a family in need is fundamentally different because our convictions are different and our team composition is different," he continues. "We don't only serve Christians. We don't only employ Sunni Muslims to help in Fallujah, a Sunni Muslim place. We make sure that the team is comprised of Sunni and Shia, maybe Christian, maybe Yazidi, to go to each group of people in need."

Courtney says core conflicts don't come down to lack of food or water.

"It's that we don't know how to relate to each other and we don't know each other very well. Americans don't know Iraqis. Christians don't know Muslims. People with light skin tend to be suspicious of people with darker skin and vice versa. Humans are just not very good at breaking out of our tribal boundaries, so everything we do at Preemptive Love is built on that foundation of trying to make sure we're crossing lines of faith, lines of conflict, enemy lines, and bringing people together," he explains. "Food delivery and job creation is never just about that; it's always pursuing a greater flourishing for the people involved. It's a pursuit of peace in its fullest sense; not the absence of conflict, but the full-fledged embrace of someone of a different faith."

Jeremy, his wife Jessica, and Cody Fisher began PLC's precursor: Buy Shoes. Save Lives. in Iraq in 2007. Iraq has one of the world's highest rates of birth defects, largely due to chemical attacks during Saddam Hussein's reign and the after-effects of the decade-long war. By coordinating short-term and longer-term training of doctors and nurses, PLC has played a key role in performing 1,350 lifesaving operations for children.

In 2014, when ISIS began marking Christian homes in Mosul with the Arabic letter 'N' for Nazarene, Courtney used social media to help inform the world of escalating violence against Christians and all the persecuted groups in Iraq, including Muslims, Yazidis and Shia Turkmen. In promoting solidary with the people of Iraq, Courtney appeared in several major U.S. television news outlets such as CNN and Fox News. His message was simple: "If one group is marked, we’re all marked."

Over the last two years, PLC has grown beyond exclusively a medical organization.

"Our medical division is running smoothly, and we began a newer division that does emergency relief and long-term economic development focused at the headwaters of the Syrian-Iraqi refugee crisis.”"

Courtney is always working on the programmatic concerns of current crises and building organizational resources, both human and financial, to grow PLC and help address people's long-term needs. Currently, he is focused on the front lines in Fallujah and preparing for the liberation of Mosul.

"Right now in Fallujah, a city that was under ISIS control for years and has been liberated, we find ourselves with 87,000 people living in this desert needing food and water, never mind providing income for themselves and rebuilding their city," he says. "And we're gearing up for the liberation of Mosul, which will be similar, except we're expecting to see up to a million people displaced. No one's ready for it, but we are keyed in. The financial resources just aren't there across the board to be ready for this situation. We are also looking for quality leaders and technicians and the resources to hire those people."

Courtney grew up in Austin and graduated from Howard Payne University before earning a scholarship to Baylor's Truett Seminary, where he graduated in 2004. Jeremy, Jessica and their two children have lived in Iraq for nearly a decade.

Several professors profoundly impacted Courtney, including Dr. Bob Roberts, a Dallas pastor who was going in and out of Afghanistan, and Dr. Ralph Wood, who showed Courtney how to get the most out of reading literature.

"The overall culture of Baylor was one that was mindful of the wider world around us and encouraged us to look beyond ourselves for others," Courtney says. "At the beginning of my first semester at Truett, 9/11 happened, and so my entire time at Baylor was marked by a conversation about terrorism and Muslims and Christians and the West and the Middle East. Ultimately, I think the way that conversation was framed and the environment that we had for that conversation at Baylor ended up being significantly influential in our family's desire to spend our lives in hard places serving those who needed it most."

Another major difference in Preemptive Love and others is that Courtney includes "Failure Reports," on his organization's website, preemptivelove.org. The reports outline what has gone wrong over the past year and how those things might be remedied in the future.

"I've found that maintaining the illusion of perfection is actually a lot more taxing and, ultimately, problematic than sharing your failures and lessons learned along the way," Courtney says. "We want to have an open, ongoing conversation with our core base of supporters about what it means to run an international organization working in dynamic conflict zones. We've just found that telling the truth and being transparent along the way actually is better for us and I believe it’s better for the industry as a whole."

Courtney continues to be an innovative problem solver and a beacon of peace among longstanding enemies. Each bridge he builds is one that exponentially increases the chances of bringing restoration and trust between groups that have not experienced true peace in generations.

To learn more about PLC and Jeremy Courtney, read his book Preemptive Love and the Winter 2015 Baylor Magazine article “Healing the Heart."