Alumnus of the Year: Tom Rosenbalm 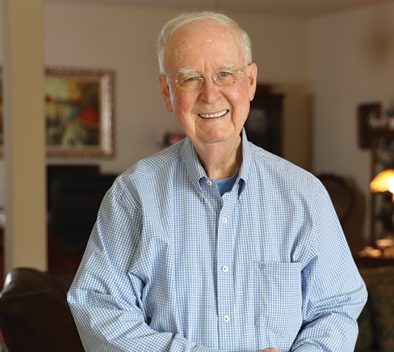 In the middle of September 1958, Typhoon Helen barreled its way through the Pacific Ocean toward the southwestern extremes of the Japanese archipelago. Though overshadowed by the catastrophic Typhoon Ida that devastated Japan later that month, Helen did its fair share of damage with 24 fatalities and nearly 50 missing persons

The mission was to assist 28-year-old Nobu Nanjo, the wife of a Japanese Air Force lieutenant, as she was suffering obstetric complications. Heavy seas forced the seaplane to land off shore, and Rosenbalm and Panska used a rubber raft to reach the coast.

"When we landed, water totally covered the entire plane," Rosenbalm says. "You looked out the windows, and you were under water."

In the end, Rosenbalm and Panska rode several hours on a flatbed truck to reach the hospital where Nanjo was "hemorrhaging to death" and "in really bad shape," according to Rosenbalm. "But she made it and survived."

That heroic endeavor was a snapshot of a life spent assisting others that began in Bartlett, Texas, along State Highway 95 south of Temple. Rosenbalm spent the majority of his childhood in doctors’ offices due to an autoimmune disease, which led doctors to tell his parents it would be surprising if he lived long enough to enter first grade. He battled acute rheumatic fever with heart complications at age 4; the only treatment was bedrest, which led to Rosenbalm having to relearn how to walk after a year in bed.

"I was sick all the way through elementary school, in high school, all the way even to Baylor," Rosenbalm says, adding he chose the medical field largely because of the time he spent with hospitals and doctors as a child. "All of that made me think, 'Maybe I can help somebody.' So, I went into medicine."

Rosenbalm earned a bachelor's degree in biology and chemistry from Baylor, as well as a master's degree before attending Baylor College of Medicine thanks to the financial support of his parents, Clarence and Claudia, and his sister, Dorothy.

"My family did without in order to send me to get an education at Baylor," Rosenbalm says. "I had the advantage of my mother teaching me at home for one year. My sister being two years older than me, when my mother or dad would work with her, it would rub off on me. I liked school and excelled in school. That pushed me to go on to college, even with what I had to do without."

Rosenbalm entered the medical field and eventually purchased North Shore Medical Plaza, which now bears the name East Houston Medical Center, along with three other doctors. They ran North Shore Medical Plaza for more than a decade before selling the hospital. Rosenbalm’s decision to leave his practice was largely influenced by his desire to care for his aging parents.

"I really need to pay both of them back," he says. "I was wined and dined by Scott & White in Temple, but I just couldn't leave my parents."

Rosenbalm did, however, continue to serve on the board of regents for Nashville, Tenn., based Hospital Affiliates International (now Hospital Corp. of America), and he was director of a bank in downtown Houston.

"Both of those are really fortunate things that not too many people get to do, not from my background, that's for sure," Rosenbalm says. "I've had some accomplishments that I didn’t think anyone from the little ol' town of Bartlett could ever do."

Rosenbalm, who spent his freshman year at the University of Texas at Austin before transferring to Baylor, credits his alma mater for much of what he was able to accomplish. While a student at Baylor, Rosenbalm developed a strong bond with Dr. Cornelia Marschall Smith, who was head of the biology department.

"It was the closeness with the faculty, getting to know your professors, that made a lot of difference," Rosenbalm said. "The people at Baylor were so friendly, the other students. I thought there were a lot of them like me, people who grew up with very little."

When Rosenbalm decided to give back to Baylor, he drew upon inspiration from his travels in Europe.

"I fell in love with fountains in Rome and Moscow, places like that," he says. "I wanted to have a place in the center of campus to bring people together. I wanted it to be a place where families could go and visit and take pictures."

Therefore, in 2014, construction began on the Rosenbalm Fountain as part of the renovations to Fifth Street along Fountain Mall. The fountain, which was made possible by Rosenbalm's gift in honor of his late parents and sister, was dedicated during homecoming festivities in October 2015.

"It brought everything together," Rosenbalm says of the fountain. "That really more than anything is what it means to me, a place where everyone could come together. It united the campus."

Rosenbalm says Baylor will always hold a special place in his heart. One reason is that he isn't the only Bear in the family. His daughter Laura Carpenter and her husband Robert Carpenter are fellow Baylor alumni. But, there is more.

"I have such fond memories of Baylor, and I just love it," he says. "All my family is buried in Bartlett. I'm going to be buried just outside Waco. I loved Baylor that much."