Are you discouraged about the state of American politics? Tired of our toxic incivility? If so, you're not alone, either today or in history.

In 1786, George Washington wrote that he already feared for the new American nation, just three years after the end of the American Revolution. America had gotten bogged down in petty squabbling over the consequences of independence. Some said a large republic like America could never survive. Some wanted to break up the nation into little republics. Others wanted to go back to having a king.

The gloomy Washington wrote that "our affairs are drawing rapidly to a crisis...We have probably had too good an opinion of human nature." Could people ever work together for the public good, he wondered? "We must take human nature as we find it. Perfection falls not to the share of mortals," Washington mused. Washington and his Virginia colleague James Madison knew they needed to forge a government that would better account for people's innate failings. That concern resulted in the Constitutional Convention of 1787.

I find it strangely comforting to see how frustrated the Founders got with politics. It is heartening to know that their frustration led to something good, in the form of the Constitution. Sometimes we may think of the Founding era as golden age of American political history, with great leaders agreeing on great principles. But in some ways, their era was as riven by selfish feuding as our system is today. (Whether or not we have leaders now who match up to a Washington or Madison is another question.)

Christians might especially feel tempted to write off politics in this election year, one that many observers regard as particularly nasty and shallow. A Christian's citizenship is in heaven, Philippians 3:20 reminds us. We're pilgrims and sojourners, not fully at home in this world. The political drama of 2016 will pass away, but God's Kingdom never will.

All this is true. But we shouldn't write off politics completely. As disheartening as today's political environment may be, there remains an important place for Christian political involvement. The history of certain Christians--especially Baptists--at the time of the American Founding can give us guidance about how best to balance our earthly and heavenly citizenships.

However bad our political problems might seem now, Revolutionary-era Baptists had it worse. American Christians are quick to throw around the word "persecution" today, but Baptists in Revolutionary America knew exactly what that word meant. Because they did not wish to attend or financially support the "established" churches of Virginia, Massachusetts, and other colonies, Baptists and other dissenters faced fines, confiscation of property and imprisonment. 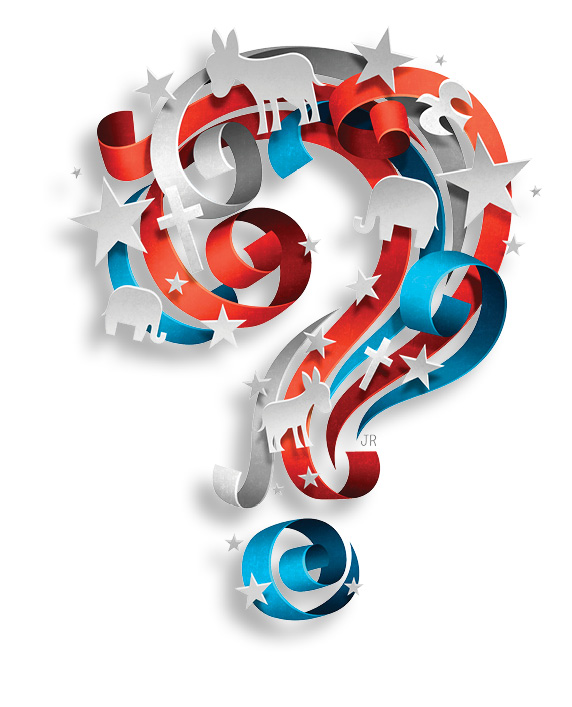 Consider the case of Virginia Baptist preacher John Waller, whom friends once called "Swearing Jack." Before his Christian conversion, Waller was a lawyer, a brawler and a drunk. He once prosecuted a Baptist pastor for illegal preaching. But he could not shake the feeling that the prosecuted pastor had a quiet strength and peace that Waller did not have. Soon Swearing Jack found himself attending the Baptists' meetings, where he learned that God would forgive his sins if he would repent and put his faith in Christ. Waller did so, and he received believer's baptism.

Almost immediately the zealous Waller began preaching the gospel of the Baptists. That drew unwanted attention. Waller got arrested for unlicensed preaching for the first time in 1768. Then in 1771, an Anglican minister, the Caroline County sheriff and a posse of their supporters caught Waller preaching at a Baptist meeting. The Anglican minister reportedly jammed the butt end of a whip into Waller's mouth, and the posse dragged Waller out and horsewhipped him. Waller was left covered with blood and dust, but he cleaned himself up, went back into the meeting, and started preaching again.

Dozens of Baptist ministers in Virginia were jailed for illegal preaching, right up until the outbreak of the American Revolution. Figures like Thomas Jefferson and James Madison opposed religious persecution on the basis of Enlightenment principles, but they witnessed the results of persecution firsthand in Virginia due to the mistreatment of Baptists. A young Madison (an Anglican himself) wrote in the early 1770s about how much he deplored the "hell-conceived principle of persecution."

Once the American Revolution began, Baptists and others began advocating that Virginia drop its religious establishment, or state-supported Anglican denomination. With help from Madison, the Virginia Declaration of Rights in 1776 affirmed that all citizens would enjoy "free exercise of religion," a foundational concept that would reappear 15 years later in the First Amendment to the Constitution.

Baptists flooded the Virginia legislature with petitions to help Madison and Jefferson bring about full religious freedom, and end the state's connection to the Church of England. One of the Baptist pleas was a remarkable petition with 10,000 signatories, representing about 10 percent of the entire white male population of Virginia. (Jefferson recalled that the question "brought on the severest contests in which I have ever been engaged.") But the state was not ready to abandon its established church yet.

Baptists warned state officials that if they expected Baptist support for the Revolution, the persecution had to stop. And it did largely cease during the course of the war. Tax funding for the Anglican Church also was suspended. But when the war concluded, supporters of the Church of England wanted to resume some kind of financial support. Patrick Henry, famous for the "Liberty or Death" speech of 1775, was the leader of the establishment faction in Virginia.

Henry did not approve of persecuting dissenters. He reportedly had defended some Baptists from prosecution as a county lawyer. But he believed that religion was so vital to the life of a free society, that the government should support it. This was the system that most Anglicans (now members of the "Episcopal Church" after the war) had grown up with, and the kind of church establishment that England has maintained through present day.

So Henry proposed a "general assessment" for religion, under which people would have to pay religious taxes, but they could designate the denomination to receive the funds. George Washington originally supported Henry's plan, thinking it was a good compromise between establishment and terminating state support for religion entirely. Madison and the Baptists opposed the general assessment, however, and Madison penned his celebrated "Memorial and Remonstrance" in 1785 to combat the idea. Madison argued that pure Christianity would flourish without state support, as it had during the time of Christ.

The defeat of Henry's plan led to a reconsideration of Jefferson's Bill for Establishing Religious Freedom. Jefferson originally had proposed this bill in 1779. Now that Jefferson was away in Paris, serving as an ambassador, Madison began promoting the bill again in 1786. Based on the principle that "Almighty God hath created the mind free," it argued against any kind of religious compulsion by the state. Whether they be Baptists, heretics, or any oddball dissenter whatsoever, no one should suffer civil disadvantages because of their religious ideas.

The legislature agreed, and the Bill for Establishing Religious Freedom passed. No one would have to attend an official state church, or give compulsory religious taxes in Virginia any more. Not that church and state would be entirely disconnected--even Jefferson often hosted church services in government buildings. But with the support of legions of Baptists, Virginia put religion on the freest footing. It was not coincidental that Virginia, and the nation itself, would see an enormous period of Christian growth over the next six decades, during the era of the Second Great Awakening.

But Baptists were not done yet. When Madison and the Philadelphia Constitutional Convention first issued the new Constitution in 1787, it did not include a Bill of Rights. Many Baptists in Virginia and elsewhere worried that a more powerful national government might infringe upon religious liberty, or create a national denomination. Virginia Baptist leader John Leland warned that without safeguards for freedom, the people would be left futilely to hope that their leaders would never abuse their authority.

Baptist reluctance helped to force Madison to go home to Virginia to advocate for the Constitution’s ratification. In response to many complaints, Madison switched his original opposition to a Bill of Rights, and promised that he would fight for one in the first Congress. Madison and Leland seem to have met personally so that Madison could give him these assurances. Soon Leland and most Virginia Baptists did come around to support the Constitution. Madison kept his promise, helping to pass the First Amendment’s guarantee of "free exercise of religion," and its prohibition of an "establishment of religion," or a national denomination.

What can we learn from the Baptists' experience in the Revolutionary era? First, we should remember the Baptist tradition's historic commitment to religious liberty, which was born out of the intense persecution they experienced in the colonial era. Sometimes the phrase "separation of church and state" has taken on negative connotations for Christians, because of secularist activists who take it to mean the entire removal of religion from public life. But to Baptists of the Revolutionary era, the focus was getting the government out of religion and ending tax support for oppressive state churches. We can thank the Baptists and other critics of the Constitution for helping to secure religious liberty and the other precious guarantees of the Bill of Rights.

Second, we should remember that Baptists in the Revolutionary era overcame much more difficult political challenges than any Christians face in the U.S. today. (Horrific persecution is of course a reality for many Christians elsewhere in the world.) Some Christians are eager to speak of "persecution" for infractions such as companies discouraging employees from saying "Merry Christmas." This may be a violation of conscience, but it isn't the same as preachers facing jail time. We should be grateful for how our forebears overcame terrible mistreatment and boldly engaged the political process in order to win religious liberty for coming generations. We might be discouraged about lowbrow political discourse and uninspiring candidates, but remember that Revolutionary-era Baptists had much bigger problems to deal with.

Finally, the story of the Baptists of the Revolutionary era should remind us that, while our hope is not in politics, there are still political issues worth fighting for. Christians may disagree on the best policy responses, but major issues with moral and religious liberty implications stare us in the face. Marriage, abortion and sexuality are the most obvious, but the list goes on. How do we balance enforcement of immigration law without being hateful toward the millions of undocumented immigrants already here? What should Christians do about modern-day slavery and sex trafficking? How do we respond to the vast problems in our criminal justice system? What should Christian parents do about their children's education?

I suspect that our Baptist ancestors would remind us that, whatever discouragement we feel about the state of politics, the gravity of these issues will not allow us to abandon politics. Sometimes progress will be slow in coming. The Baptists of England and America had suffered under almost two centuries of persecution before the great triumphs of the 1780s. But the Baptists’ example shows that a faithful political witness can bring about major changes in time, if we do not lose heart.

Dr. Thomas S. Kidd is Distinguished Professor of History at Baylor and associate director of Baylor's Institute for Studies of Religion. He is the author or co-author of many books, including Baptists in America: A History with fellow Baylor professor Barry G. Hankins.