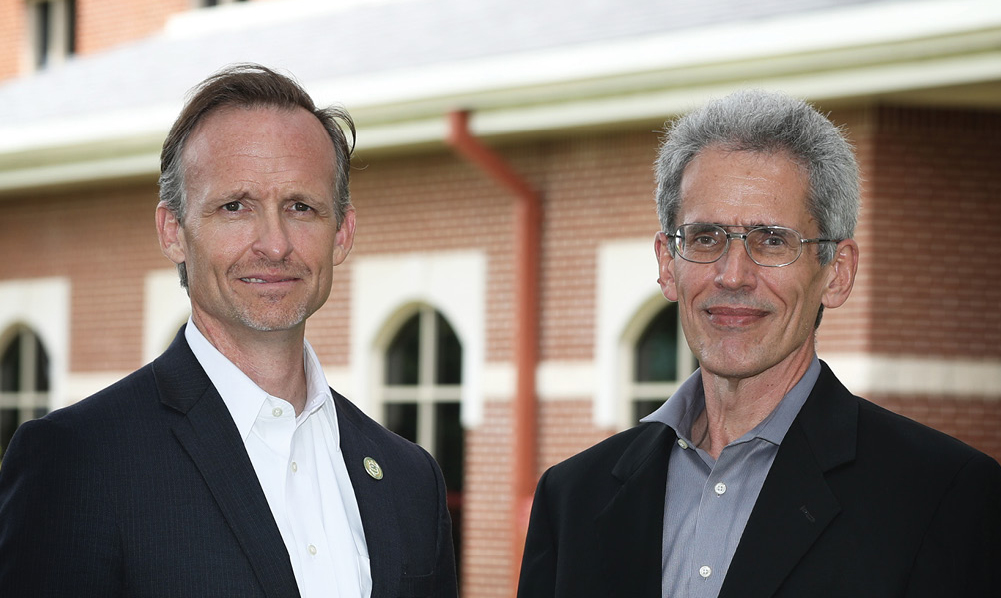 Shortly after being named associate vice president for public safety and security, former United States Secret Service agent Mark Childers showed Baylor's Board of Regents footage of the 1981 assassination attempt of Ronald Reagan. "The Secret Service is the gold standard for protective service, period, in the world," Childers said, noting that prior to the Reagan assassination attempt the Secret Service did not post an agent with the press corps. "At the time, that wasn't part of the deal. But that was the gold standard, and even when you're doing everything, bad things happen. It's how you respond to the bad things that will define you as a professional."

Childers joined Baylor in September 2014 after a 26-year career in federal law enforcement with the U.S. Marshals Service and the U.S. Secret Service, where he supervised protective operations for President George W. Bush and foreign dignitaries. His final operation on Bush's detail served as a transition to his role with Baylor as he oversaw the former president's visit to Waco for the opening game at McLane Stadium.

Although he went from protecting one man to protecting nearly 20,000 students, faculty and staff, Childers' approach to his task has not changed.

"It's that same passion, that same intensity," Childers said. "And that's the pace I expect from my police chief and my directors. Bringing that 360-degree coverage for the president in all security disciplines--bringing that to Baylor has been a very positive thing."

Safety and security at Baylor is a far-reaching endeavor. Childers said the Department of Public Safety (DPS) staff works everything from bicycle theft to counterterrorism - a stark reminder of how campus-life threats have evolved in the past two decades.

"It's an ongoing, nonstop forward lean," he said. "Our eyes are always downrange."

There have been many changes in campus safety and security during Childers' nearly two years at Baylor because that is the nature of the operation: a constant commitment to improvement.

"I can't speak to what it was before I came here, but I know that we've made great efforts in terms of interoperability with student conduct, the Title IX office and the Student Safety Taskforce," Childers said. "We work hand-in-hand with them in education and investigation. We're constantly engaged with Student Senate, Faculty Senate, Staff Council, student forums, meetings and groups. Any time students, faculty or staff are gathering, we're inserting our people and talking about our mission here."

"We liaise with them daily," Childers said. "We're constantly evaluating, assessing and reassessing all of our disciplines on campus to make sure that we're applying the best practices all the time. We're never comfortable sitting back, thinking we've reached a milestone, that we're good. We're always forward leaning, and we do that through collaboration with our partners."

Baylor officials recently completed what Childers calls benchmarking trips to Yale University and Virginia Tech, learning from their law enforcement safety programs and comparing their practices and policies. He said Baylor is making progress toward its goal of being the gold standard in campus law enforcement.

Over the past 20 months, Baylor has added nine police officers (bringing the total of commissioned officers to 38), promoted Brad Wigtil to chief of police and hired John Kolinek as support services captain. Kolinek previously served 25 years in the McLennan County Sheriff's Office.

Wigtil joined the Baylor police department in August 2012 after 20 years with the University of Houston Department of Public Safety. He also worked for the Houston Police Department.

"He is the quintessential campus police chief," Childers said of Wigtil. "The guy is phenomenal in terms of his commitment and service to the campus, students, faculty and staff. He really exemplifies what it means to be the professional law enforcement police chief."

Wigtil, whose son and daughter both attended Baylor prior to his joining the university, said there are some differences between municipal and campus law enforcement but that there is a very effective model for both: community-oriented placement.

"It is critical that we interact with our community and determine what their concerns are," Wigtil said. "We must learn the cares and concerns of our community."

Wigtil has implemented a program in which officers are required to spend at least 30 minutes each day meeting members of the Baylor community, introducing themselves and asking what they can do to better serve.

"When you develop a relationship, you develop trust," Wigtil said. "When you get that going, then people feel a lot more comfortable reporting issues, concerns, suspicious activity, and suspicious people to the police. And there is more of this community interaction to come. Police departments must have great relationships with their communities, and that's what we're stressing. Communication is the key with our community to serve them well."

Wigtil said one challenge in campus safety that is different than municipal police work is turnover as roughly one-quarter of the population they serve changes every year as students graduate and new students enter.

"You must re-educate your community as you get the next class of freshmen in, helping them understand some things they can do to maintain their safety and what their part is," he said, noting that the sheer call workload in a municipal police department such as Houston's made it difficult to establish true community interjection and what he calls an educational mission. "Sometimes that educational mission is when our students put themselves in tough situations, and we have to deal with that behavior. It's not punishment, it's educational, and we work very closely with judicial affairs. A lot of students learn valuable life lessons no matter where they are in the continuum with their interaction with us."

Wigtil said feedback from faculty, staff and students regarding the police department's community engagement has been positive.

"Mostly that feedback comes through the officers," Wigtil said. "You get those anecdotal stories and by far the reaction is, 'Thank you for what you do.' They hear that on a daily basis, and that's what we're here to do. We're going to run to the fight. We're going to do everything we can do to keep this community safe."

To that end, Wigtil pointedly and immediately responds to the question of the current level of safety on Baylor's campus with one word: outstanding. Furthermore, he and Childers both encourage parents of perspective Baylor students to visit with them about the state of campus safety.

At the same time, Childers and Wigtil admit that the definition of "safe" is each person's perception and that one reported assault or burglary is one too many.

"You cannot control human behavior," Childers said. "There is no silver bullet to stop bad things from happening, but we're constantly educating, trying to mitigate and then enforce good behavior."

The steps Baylor DPS has taken toward this goal are far-reaching, from better community engagement to more presence in the areas surrounding campus to pursuing accreditation levels with outside organizations. Childers said these steps are not in response to things that have happened at and around Baylor in the past five years but simply are an outgrowth of the goals of this division.

Baylor is in the process of gaining accreditation from the International Association of Campus Law Enforcement Administrators (IACLEA). The program consists of 213 standards, some of which are optional but departments must comply with 60 percent of even the optional standards. Wigtil said IACLEA's guidelines represent the best practices developed by the organization. He also said that Baylor has laid the groundwork and is well into the accreditation process. Shelley Deats is Baylor's Clery Act and IACLEA accreditation specialist.

Furthermore, the university has established memorandums of understanding (MOUs) with the Waco Police Department, put together a threat assessment group to better identify threats internally and externally and strengthened emergency management operations.

Over the past two years, Baylor Police has established a designated patrol in the neighborhoods surrounding campus--an area Wigtil refers to as the "extra territory" or "ET." This includes the crime-free multi-housing program that oversees the sundry apartment complexes, condominiums and rental houses near campus. All of this involves coordination and cooperation with Waco Police and rental management companies. Wigtil said certified complexes have about 50 percent lower crime rates than non-certified complexes. But it goes further than the property itself.

"One of the great things about this program is its coordination with tenant lease agreements," Wigtil said. "If you're convicted of a certain level crime, [the management company] will not accept you as a tenant there."

As for policing the "ET," Wigtil said communication is the key, especially with the Waco Police Department.

"Waco PD dispatches a Waco officer to an area, and we hear it real-time," he said. "It gives us situational awareness as far as keeping the campus-proper safe. The other part of that is we're also responding; a lot of times, we beat them to the call. They appreciate it because they're backing us up, and we're backing them up, so to speak."

Childers said such communication was one area that needed to be addressed upon his arrival. Previously, Baylor Police used an internal radio system.

"We identified that as not being effective," Childers said, adding they now are on the same system as Waco Police, the McLennan County Sheriff's Office and the Waco Fire Department. "It goes back to assessing and reassessing our strengths and weaknesses."

Childers said he and his staff consistently meet with internal Baylor entities and receive daily feedback from their law enforcement partners. His directors regularly attend conferences to learn from other campus law enforcement professionals and undergo outside training. Additionally, they meet internally to discuss better practices and ways to improve.

"I have a passion for training because I believe it prepares the officers and the dispatchers to do their jobs well," Wigtil said. "The Texas Commission on Law Enforcement only requires 40 hours of training every two years. Last year, we averaged 100 hours per officer. The officers are getting exposed to the latest, greatest, best practices."

Wigtil also said he meets weekly with the Title IX office and that sharing information is key.

"I have information they don’t have and vice versa," Wigtil said. "There's a synergy there working together and sharing information."

Childers praised the job Patty Crawford has done since being hired as Title IX Coordinator in November 2014. He remembers her immediately telling him and others at Baylor that reports of sexual assault would increase as reporting processes and procedures were established. Childers said she made it clear that the university wants a trust and comfort level that makes it easier for survivors to come forward.

In all aspects of building better campus- wide communication for the purpose of making Baylor a safer place, Childers said everything starts with relationships.

"It's the personal relationship and the trust that is established," Childers said. "Once people understand that they can trust you and you know what you're talking about, those walls kind of disappear and you integrate."

All of this points to the "forward lean" of which Childers regularly speaks, the need to constantly reassess and improve.

"That's where you improve, better collaboration, equipping the directors and police chief, training the department, having them out at conferences, looking at it nationally, a holistic standpoint, what's going on at other campuses and measuring ourselves and seeing where we are," Childers said. "We are where we need to be, and we will continue to get even better."