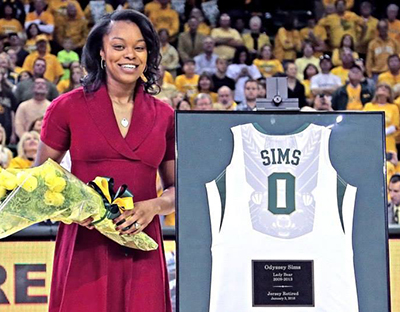 "Just being able to come back and coach (Kim) Mulkey giving me the opportunity to even have this time means a lot," said Sims, who ranks third all-time in scoring (2,533) and second in assists (641) in the history of the Baylor program. "It hasn't hit me yet. I'm still overwhelmed just as far as getting my jersey retired."

Fulfilling a requirement that Mulkey stipulated for any player to be eligible to have her jersey retired, Sims finished her BA in speech communication in August 2014.

"When I got my degree, I was finally saying, 'I'm done with school,''' Sims said. "That was really first and foremost. Coach Mulkey stressed that, and she still does with all her players: 'Make sure you get your degree.' She didn't really mention (the jersey retirement) to me, just kind of brushed over it, but we finally got the opportunity to get it done, and here I am today."

Sims will enter her third season in the Women's National Basketball Association as a guard for the Dallas Wings, who moved to Dallas last year from Tulsa. 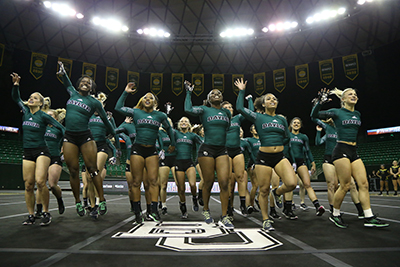 Baylor was selected as the host site for the 2016 NCATA National Championship, giving the Bears the chance to earn their second straight title on their home floor.

"Baylor is excited to host the 2016 NCATA National Championship," Nancy Post, associate athletics director and senior woman administrator, said. "Coming off a tremendous season where we saw our team improve with each meet and our fan base grow in numbers and excitement about this new sport, we believe that Baylor Nation can help bring greater exposure for A&T and this Championship to not only the Greater Waco area but throughout Texas and nationally."

The Championship will be held at the Ferrell Center April 16-19, with the final eight teams coming to Waco to compete for the title. The 2016 NCATA Championship marks the second time Baylor has hosted the event, as the Bears were the tournament hosts in 2012. Last season, under first-year head coach Felecia Mulkey, Baylor won its first NCATA national championship, defeating four-time and defending national champion Oregon, 286.690-282.870.

Seventy years after he made the ultimate sacrifice storming fortifications on Iwo Jima, former Baylor student-athlete Jack Lummus, BSEd '41, continues to be remembered for his heroism with his induction into the New York Giants Ring of Honor at MetLife Stadium in October.

Lummus made a name for himself as an athlete at Baylor, where he starred for the football, baseball and basketball teams. He played one promising year with the Giants in 1941, but he enlisted in the United States Marines after the attack on Pearl Harbor.

He rose to the rank of First Lieutenant and on March 8, 1945, led a daring raid into enemy fire on Iwo Jima. Despite sustaining gruesome injuries, he continued to exhort his men to take the Japanese fortifications on the island to secure a key U.S. victory. He later succumbed to his injuries and was posthumously presented the Congressional Medal of Honor. His citation proclaimed his "outstanding valor, skilled tactics and tenacious perseverance in the face of overwhelming odds…He gallantly gave his life in service of his country."

The New York Giants inducted Lummus into the team's Ring of Honor in their Oct. 11, 2015, game against the San Francisco 49ers. In a release, the Giants said of Lummus, "Today, 70 years after his death, Lummus' legacy endures. His name will forever be displayed for fans to see at every Giants home game with the other members of the Ring of Honor."