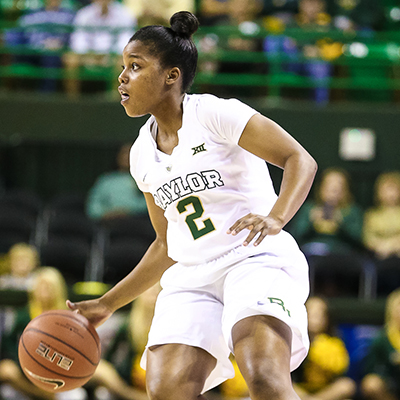 If Niya Johnson was the type of player to value individual accomplishment, she’d find plenty of reasons to be satisfied with her Lady Bear career.

The senior point guard set the program's all-time assist record as a junior, and her name is everywhere in the Baylor and Big 12 record books. She's on pace to lead the nation in assists per game for the second straight year, and her 19 assists against McNeese State in December was a Baylor single-game record.

The records, however, aren't enough for Johnson, nor is the "annoying" number eight. She's nagged by a sense of unfinished business. In each of the last two seasons, the Lady Bears reached the Elite Eight, where a victory would set them just two wins away from the program’s third national title. But, Johnson’s sophomore and junior seasons both came to an end in their Elite Eight game, tantalizingly close to the Final Four and the chance to play for a title.

"It's annoying," Johnson said. "That's been like a roadblock being in the Elite Eight two years in a row. The other starters and I, who have been here, are tired of getting to the Elite Eight. Winning a national championship motivates us."

This year, the Lady Bears adopted "eight is not enough" as a team motto. The 2012 national championship team was the last Lady Bear squad to clear the Elite Eight hurdle--before any current players started playing in green and gold. "Eight is not enough" is a rallying cry for the whole team, but it's compelling for Johnson in a way that only a senior can fully appreciate. She said she thinks about a national championship daily.

"A championship is something I'm thinking about all the time, every time I'm on the court," she said. "Honestly, I don't feed into the records and stats. People tell me the records a lot and I'm thankful for it, but it doesn't really matter to me. Going further and winning it all is what I'm playing for."

Hoisting a trophy in Indianapolis, the host of the 2016 Women's Final Four may be the ultimate goal, but there are stepping-stones along the way. Baylor has won five straight Big 12 titles, and Johnson hopes to make it six in a row to cap off her career with nothing but conference championships. There's also the matter of reaching the Elite Eight once again, something Johnson said "is never easy" and shouldn't be taken for granted. She sees in her teammates, though, the potential to exceed the accomplishments of previous years and, as the leader on the floor, she’s trying to set the tone to help them get there.

"It's not about making me look good, but making my teammates look good," Johnson said. "This is my last year. You have four years and you have to make the best of it. I realize that you can never get this time back when it's over, so I'm giving it everything I have, every game." 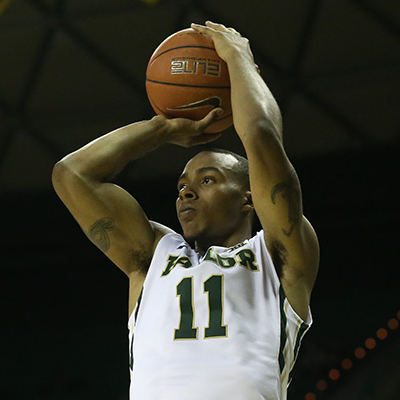 Lester Medford scored 11 second- half points in Baylor's 69-67 win over then-No. 16 Vanderbilt at the Ferrell Center in early December. His last three points were the biggest.

Medford, a senior guard from Tucson, Ariz., sank a 3-pointer with 42 seconds remaining that erased a one-point Vanderbilt lead and provided the game's final points. It was his lone 3-pointer of the game.

"It was amazing," Medford said of the shot and the game. "That was a very big game for us. It was a good win and gave us momentum."

Medford is in his first year as Baylor's starting point guard, taking over for the graduated Kenny Chery. As a junior in 2014-15, Medford averaged 7.6 points per game and was third on the team with 106 assists.

"My first year here was all about adapting and seeing what Kenny did well, learning from each other," Medford said. "I still talk with him a lot."

Another person with whom Medford speaks regularly is former University of Arizona running back Kelvin Eafon, who Medford refers to as his father. Eafon, a Seagoville, Texas, native, led Arizona with 16 touchdowns in 1998 when the Wildcats went 12-1 and won the Holiday Bowl. He was Medford's summer league coach and has been a key influence on the Bears’ point guard for years.

"I go to him about everything," Medford said. "He's my mentor. He's always been that guy I can go to about anything."

Baylor's point guard tradition with recent players such as Chery, Curtis Jerrells and Pierre Jackson caught Medford's eye, as did the program's success with point guards from the junior college ranks.

"The Christian atmosphere was good for me, as well," Medford said. "It's a family atmosphere, and they won games."

Medford said his visit to Baylor sealed the deal in terms of where he would spend his final two collegiate seasons.

"We have a beautiful campus," he said. "I love walking around when we have a nice day. They keep us busy. There are a lot of things to do on campus, and everybody is really involved."

Eafon and Medford appreciate the opposite direction of their paths--Eafon from Texas to Arizona, and Medford from Arizona to Texas. Medford's journey to Baylor was anything but a direct route, though. He led Amphitheater High School to a 29-2 record and a state title as a senior and garnered attention from several schools, including Oregon State and UC-Irvine.

But Medford needed to focus on academics and spent a year at Tucson's Pima College before transferring to Arizona Western. He said Baylor has been well worth the wait.

"It gave me a chance to play on a bigger stage," Medford said. "I learned a lot playing on different teams and playing with different guys. When you play with that many different people and you come to a new team, it's easy to adapt."