Central to an exceptional business education is the opportunity to gain insight from business leaders across numerous fields. And, it's "good business" for anyone who hopes to thrive in today's economy--and to prepare for the future.

As a part of the celebratory opening events last fall for Baylor's Paul L. Foster Campus for Business and Innovation, nearly a dozen special guests came together to share challenges and opportunities in the broad-reaching industries of technology, healthcare and energy and on the topic of innovation in business. Many of those leaders also are members of the Baylor family.

"The Paul L. Foster Campus for Business and Innovation is designed to provide the most advanced learning environment for our students and be a gathering place in which business leaders will collaborate and shape the futures of their industries," said Terry Maness, dean of Baylor's Hankamer School of Business.

"It was fitting that the opening event, the Leadership+Innovation Summit, tackled significant issues in our economy. It provided our students unparalleled exposure to business executives and illustrated leadership in gathering together these executives for important conversations."

The Summit featured a conversation between Baylor President and Chancellor Ken Starr and General Electric Chairman and CEO Jeff Immelt. The two national figures shared their views on the importance of creating a culture that embraces change and is resilient when challenges arise.(Editor’s Note: That story begins below with additional content from the Summit following.)

Grant Teaff was known to find some hidden gems during his 21-year tenure as Baylor's football coach. However, his recruiting realm rarely ventured outside the state of Texas; so, finding offensive lineman Jeff Immelt at Finneytown High School in Cincinnati would have been a coup.

"He would never have recruited me," Immelt joked, addressing a VIP audience at the Paul and Jane Meyer Conference Center in September as part of the 2015 Baylor Leadership+Innovation Summit. The summit was the focal point surrounding the dedication of newly opened Paul L. Foster Campus for Business and Innovation, which houses Hankamer School of Business.

Immelt serves as chairman of the board and chief executive officer for General Electric, the company for which he has been an employee since 1982. He joined Baylor President and Chancellor Ken Starr for a one-on-one discussion that concluded the Leadership+Innovation Summit.

While Teaff never recruited Immelt as a football player, the two forged a strong bond decades later when Immelt was named the inaugural recipient of the American Football Coaches Association CEO Coach of the Year in 2006. Teaff, who was unable to attend the Leadership and Innovation Summit due to health concerns, offered high praise of Immelt in a letter presented to the audience by Baylor's Andrea Dixon, who serves as executive director for the Center for Professional Selling and the Keller Center.

"He accepts one invitation and shows up every year to the special dinner that the AFCA hosts to award the CEO Coach of the Year," Teaff, who has served as AFCA Executive Director since 1994, said in his letter. "He has set a tradition so that all of those recipients actually come to that dinner and honor the next person who is receiving that award."

Teaff, who refers to Immelt as a man of substance, found it important that the award's inaugural recipient exhibit strong leadership qualities and character.

Immelt again was honored by the ACFA in 2014 as recipient of the Tuss McLaughry Award, presented annually to an American (or Americans) for distinction in service to others. Immelt joined a list of former winners that includes six U.S. Presidents, Apollo 11 astronauts Edwin "Buzz" Aldrin, Neil Armstrong and Michael Collins, college and professional football coaches, actors and entertainers, and military members, including the award's inaugural honoree, Gen. Douglas MacArthur.

The relationship forged between the former coach and one of the world's most honored business leaders made it possible for Baylor to have Immelt as the featured guest for the landmark Leadership+Innovation Summit.

Immelt held various positions in GE's plastics, appliances and healthcare divisions before being named an officer with the company in 1989. Eight years later, he joined the company's board as leader of GE Healthcare. Immelt was named CEO in 2001.

In 2009, President Barack Obama appointed Immelt as a member of the President's Economic Recovery Advisory Board. Two years later, President Obama named Immelt chairman of his outside panel of economic advisers.

The conversation with Starr covered many subjects on which Immelt shared his thoughts. 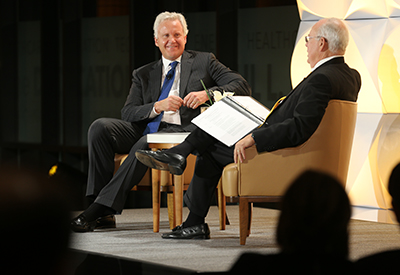 "When you travel around the world, you just don't see institutions like Baylor that are multidisciplinary, well-funded, academically strong," Immelt said.

General Electric does roughly $6 billion worth of research and development annually, according to Immelt. However, he said GE invests several hundred million dollars for research at universities, mainly in engineering and science.

"We know that the best ideas aren't all going to come from us," he said. "Having great collaboration with universities is absolutely critical for us."

Immelt said GE is not unique in this respect, saying most American companies "lean into the university system in a heavy way." He said GE has long-standing collaborations with the University of Michigan, Virginia Tech and Cornell, and that the company tries to recruit their graduates.

"What's really important for us is not just to build this bridge of research but also care about the curriculum, get to know the professors, try to align what the professors are teaching with what we want to recruit and buy."

Speaking of recruitment, Immelt was recruited as a football player out of high school by Vanderbilt, which offered him a scholarship.

Instead, Immelt attended Dartmouth in quaint Hanover, N.H., along the banks of the Connecticut River. Void of internship opportunities, Immelt worked summers in factories, including a Ford assembly line.

"When I graduated from college, I didn't know anything about anything," he said. "I didn't even know how to tie a tie almost."

Immelt was accepted to business school while still at Dartmouth but delayed pursuing his MBA for two years in order to earn money to offset debt. A mathematics and physics major at Dartmouth, Immelt said he felt ill prepared for business school.

"I had no foundation," he said. "I really didn't have a context for business. First and foremost what business school gave me was a chance to think about what I wanted to be and who I wanted to be."

It was there that his work ethic was forged as he realized the value of making the most of each day. He also learned to be a good listener. Immelt admitted that his least favorite class was organizational behavior.

Immelt said business school gives the student more than simply learned skills but a framework for the individual's career path, everything from work ethic to goals to sacrifices to impact.

"Business schools allow time for reflection of your own vision for yourself," he said. "I needed that time period to grow up."

Immelt began working for GE after completing his MBA and never left the company. His first job was in Dallas, selling plastics throughout the Southwest.

"Believe me, you didn't want a custom molder in Texas to know you had an MBA," he joked. "You wanted him to think you just came in from hunting deer."

Rolling With the Punches

Immelt became GE CEO four days before the attacks of September 11. He was in Seattle during the attacks, watching events unfold on the television in the workout center of his hotel. Two GE employees died in the attacks. Immelt reached out to New York mayor Rudy Giuliani and through GE established a fund for the families of firemen and police officers killed in the attacks.

Starr, who welcomed Giuliani to Baylor for an On Topic the week prior to the Leadership and Innovation Summit, harkened to Giuliani’s "Leadership" book and asked Immelt for his theory on the topic.

"Driving change, setting standards and developing leaders (are) three things a good CEO or leader does," Immelt said. "When I look at people that we want to promote, I always divide them up into three areas."

The first of those three areas is experience relative to a person's confidence in positions he or she has held. Immelt said he looks for competitiveness--a hatred and fear of losing, as he said.

"The one thing I can promise students here tonight--other than the fundamentals--is the world is going to be so different 10 years from now," Immelt said. "You're going to have to learn it when you get there."

Immelt said he also looks for authenticity--whether or not a person has the right blend of self-awareness and self-confidence.

Lastly, Immelt pointed to resiliency--a person's ability to persevere in tough times. He jokingly referred to Mike Tyson as a great philosopher but said he leans on the former heavyweight champion's saying, "Everybody has a strategy until they get punched in the nose."

"That's true in business, as well," Immelt said. "Judgment, the ability to stand apart. Who in a big company is willing to say, 'No, we're going to do it this way, and it's unpopular, but this is what we're going to do.'"

Immelt also said it is important for a person to be a giver rather than a taker, someone willing to give more to the workplace than what is taken from it.

Estimates are that today's business school graduates will change companies every five years during their careers. That is a stark contrast to Immelt, who has been with GE for his entire post-MBA life.

Immelt said he thought about leaving twice, but his love of his colleagues and the company always kept him coming back.

"I feel great ownership," he said. "You may give up some freedom working for a big company, but you're in a place that you're always going to be in the front seat of history. If China is going to open up, we're going to be there. If breakthroughs are made in healthcare, we can be active in that. Energy changes and transitions...you can make a huge difference. You can do things that count.

"I was always captivated by that, and I kept coming back for more."

Nonetheless, Immelt said GE recruits people who can get another job, saying the company avoids people with a mindset of being afraid to leave.

"You want people with the self-confidence to leave, but you want them to stay," he said. "That puts the pressure on you to keep work interesting."

With that comes decisions, and Starr asked Immelt for his process of analysis and coming to a conclusion. Immelt referred to the past 15 years at GE as a time of great economic change and volatility. He said judgment is developed over time through experience and the ability to ask the right questions.

Immelt said an area in which he has grown the most is being a risk manager and the ability to know which risks are worth taking--financially and socially.

"Nobody gives you a playbook for that," he said. "It is experiential. You learn by failure and doing things."

He said strong leaders need a good sense of timing and must be transparent. Immelt also said he has grown as a manager because of the financial crisis of the past decade.

"People in our generation, between 1980 and 2000, no one had ever seen tail risk in this country fundamentally," Immelt said. "You now have a generation of managers who have actually seen what tail risk looks like, and that changes you. You become more humble, more skeptical about everything."