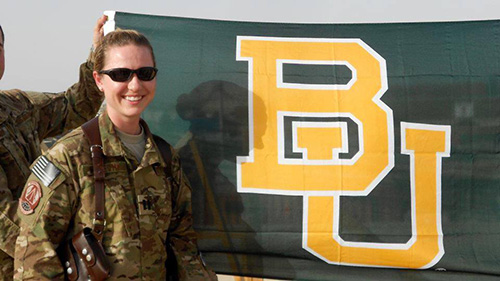 Laura LeFevre was promoted to captain in the U.S. Air Force on Memorial Day 2012, while deployed in Afghanistan.

LeFevre graduated from Baylor in May 2008. She has returned to campus several times to volunteer with her former ROTC Detachment and to enjoy her favorite Baylor tradition, Dr Pepper Hour.

"Most people know that I went to Baylor before they even know my name," LeFevre said. "Last year while I was in Qatar, I would wake up around 3 a.m. to meet up with other grads to watch Baylor football games live. It always seems that outside of campus, when two Baylor grads meet, there is an instant bond no matter where in the world you happen to be."