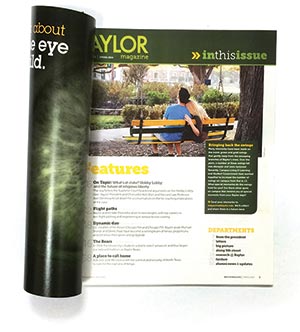 We asked for your stories to help celebrate the return of the beloved green-and-gold swings, and in those stories we noticed a theme: love. Here are a few of those letters for you to enjoy. 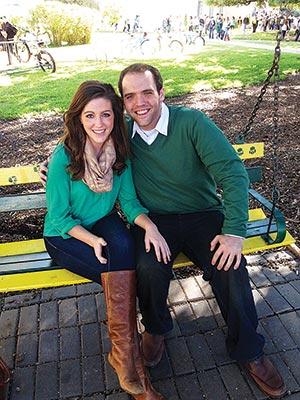 When my now fiancé (Sterling Shanks, BMEd ’12) and I were at Baylor, he took me to the swing outside of Tidwell to tell me he loved me for the first time. It was a moment I will remember forever. Every time we go back we sit on that swing. We now are engaged and will be getting married in Waco in August 2014, so we can be close to our alma mater and the institution that brought us together. Attached is a picture of us we took on that swing when we went back for Homecoming last year.

My future wife and I spent many a pleasant hour on one sharing our thoughts in the evenings, talking until just before curfew when I had to drop her off at the dorm...I hid a silver promise ring in the tree above “our” swing for a while until the proper time to present it to her. 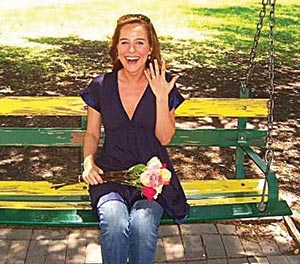 My husband Ben proposed on the swing in front of Tidwell. As a religion major I often stopped to sit on that swing and call him after class. We dated long distance for all four years of college, so there were a lot of those phone calls and subsequently many such hours on that swing! When the big moment arrived my husband actually had to make awkward small talk for a few moments as there was a group of freshmen boys playing campus golf just a few paces away, trying to hit the Tidwell sign with their frisbees. Sweet memories!

On Dec. 11, 1981, I proposed to my Baylor beauty on a swing in front of the SUB. Engagements were much simpler then! We spent hours and hours talking on those swings. Humble engagement; blessed marriage.

At the end of my freshman year, I met a beautiful woman who was also a freshman finishing out her first year at Baylor. We started dating and many of our first dates comprised of us walking the Baylor campus and stopping at several swings. For the next several years, we dated throughout our college career. Almost every Sunday night, as we looked forward to the upcoming week, we found ourselves at our favorite Baylor swing. During my last April as a Baylor student, about a month before graduation, we took our typical walk through campus and meandered to our swing. I had a ring in the front pocket of my shirt and I was pretty nervous during the entire walk. At our favorite swing, I asked her to marry me. Throughout the many years since, we have gone back to Waco for football games and other Baylor events. And incredibly, we have seen our children swaying and laughing on those same swings. These fond memories are why the inscription “In Full Swing” is going to be on our Baylor Stadium brick.

It was very timely to see your request for stories involving the campus swings. I proposed to my wife on the swing outside the Student Union Building on May 13 in 2000. I met my wife, then Tiffany Capps, ’02, in Dr. Milton Cunningham’s office the first day of class in 1997. I dropped by to see “Dr. C” but he had a girl in his office. I sat and waited for them to finish and when she got up and turned around, I was blown away. She was (and still is) a knockout!! Dr. Cunningham, a long-time family friend, immediately instructed me to stay away from this girl because she was too good for me. I heeded his advice by skipping my morning class to show her around campus. We sat on the swing outside the SUB, drank a Dr Pepper, and our lifelong friendship began. While visiting family in Waco on Mother’s Day several years later, Tiffany and I went for a walk on campus. She didn’t realize that a ring was burning a hole in my pocket as we sat on that same swing and reminisced. When she looked away, I dropped to a knee and asked her to be my wife. We just celebrated our 13th wedding anniversary and have three wonderful children (Jack and Luke are 6 and Natalie is 9). Dr. Cunningham performed our wedding ceremony and recounted that fateful day in his office when I met the love of my life and how even then, I was incapable of following instruction. People like Dr. Milton Cunningham, and simple things like the green and gold swings are what make Baylor so special. Be careful who you share a swing with, they might be with you the rest of your life!

Thank you for giving me the opportunity to share a great memory of the green and gold Baylor swing in front of Memorial from 40 years ago next week!

On June 21, 1974, Lee Johnson, BA ’75, and I had our first date while we were both attending Baylor summer school. We had been friends, members of the same church, and ministry partners in a Nursing Home Ministry at Francis Hospital in Waco for several years. After dinner that evening, we returned to campus and sat on the swing in front of Memorial and talked and dreamed about what God might have for our futures, since we were both about to graduate and go to Seminary. I had a real sense that night on that swing that God was leading us to spend that future together. How comforting that God would send me a confirmation that evening in that place! It was easy then to pray that God would send Lee the same message. We did marry almost two years to the day from that evening spent dreaming on that swing. We have celebrated 38 years of marriage and are grateful every day for God’s love, mercy, grace, providence and guidance in our lives.

Thanks again for the trip down our beautiful memory lane! 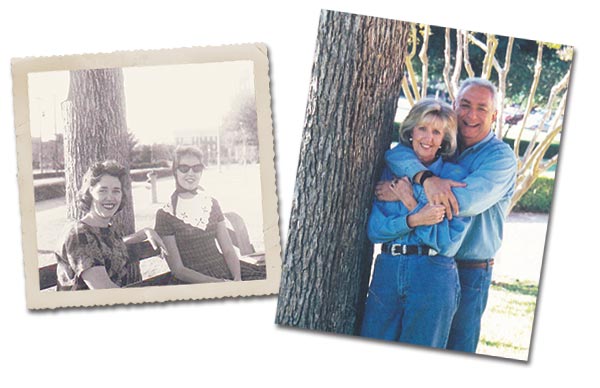 In November 1959, women were restricted to the dorms on Sunday afternoon unless they elected to be out for the entire afternoon. Pat Sullivan and her friend Nancy Stirman decided it was too nice a day to be inside so they sat on a bench just to the right of Judge Baylor, which had been next to a tree. That afternoon several men were walking on campus and came to talk to the girls. As you can see in the black and white photo (Nancy on the left, Pat on the right), they were friendly enough to pose.

[We] began to date, fell in love and were married in June 1962. 40 years later, in November 1999, our two children and six grandchildren visited the spot. The bench was gone but, of course, the tree is still there. … Nearly 52 years have passed; we have had a son graduate from Baylor and our grandson is in the class of 2016.

Needless to say that spot on campus is a very special place to us. We would be delighted if a bench re-appeared so that the next time we are on campus we can enjoy the memories.