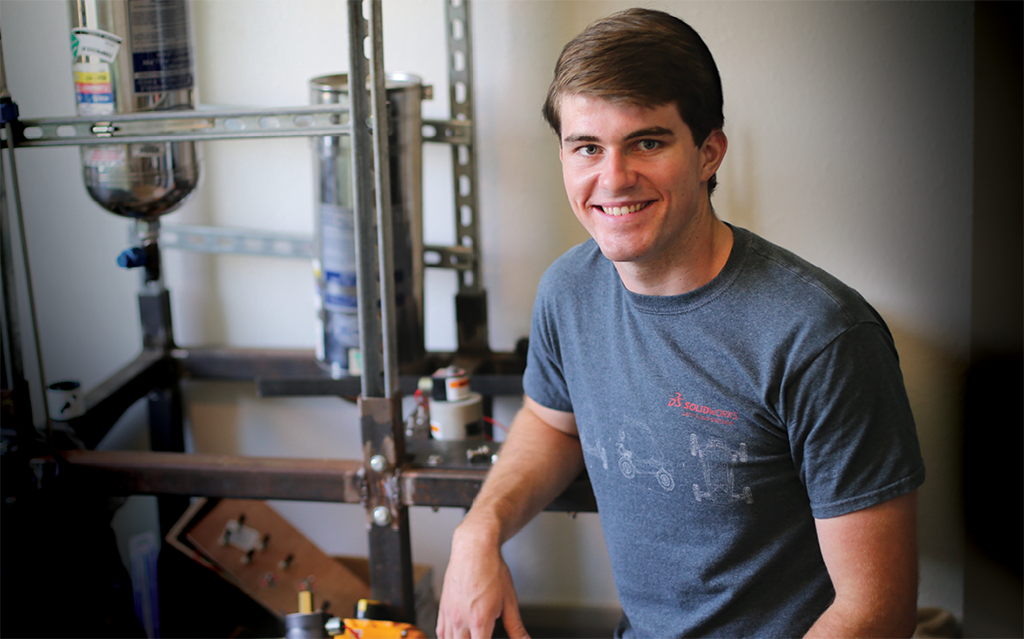 Kevin Healy, a junior mechanical engineering major from San Antonio, is dreaming big and closing in on making his current dream a reality.

He hopes to send a rocket into space—topping the amateur rocket flight record of 72 miles—by next summer. His bigger dream is creating a reusable vehicle capable of small-scale space travel—possibly opening doors for more institutions to take experiments and research into space.

Healy leads the Horizon Rocket project. While there are other ambitious amateur individuals attempting to reach space, Healy is challenging himself by using a different kind of fuel than most. His fuel of choice is liquid, rather than solid, fuel. While the preliminary design for a liquid-fuel rocket is more complicated, the end result should be more power and longer burn times.

This isn’t Healy’s first foray into creative engineering. One of his first steps involved turning a leaf blower into a hovercraft when he was a first grader. As a high school student, Healy transformed a 1981 Toyota Celica into an electric car with a charging time of 8 hours and speeds up to 70 miles per hour.

After those feats of engineering, it seemed natural to Healy that he apply his skills to build a liquid-fueled rocket. He indicates the design work isn’t that troublesome for him; however, raising money is challenging. He is working to raise another $80,000 to make a spring or summer launch a reality.

“Fundraising is the hardest part,” Healy explained. “The math is in a book, and hunkering down and learning it is just an exercise in perseverance.”

Among the professors providing assistance and guidance for Healy is Vanessa Castleberry, PhD ’10, lecturer in chemistry and biochemistry, who he says has been instrumental in his academic and professional progress since he stepped on campus.

“Dr. Castleberry really has been a mentor for the project,” Healy said. “I can just walk into her office and she’s always willing to give me advice and encouragement. She knows a lot of people in the area, which is helpful, and her moral support and enthusiasm for the project mean a lot.”

With hard work and the help of individuals and corporate sponsors, including SpaceX, a private space transportation company with a development facility outside Waco, and Lewis Energy Group in San Antonio, where Kevin interned during the summer, he raised enough money to complete his first test, projected to cost $6,500.

Healy’s dream is to provide the scientific community a platform that will expand the boundaries of scientific research and exploration. Researchers need a means of getting small experiments to space, and that is a niche Healy plans to fill. The Horizon Rocket will provide researchers with a vehicle to take their experiments to new altitudes, speeds and extremes.

His personal interest is part of a move of space exploration from the public sector to the private sector in the wake of budget cuts to NASA. Previously, space exploration led to breakthroughs and inventions that improved the quality of life on Earth, from medical advances to communications technology. Healy says he hopes his work will inspire a younger generation toward space exploration.

For now, Healy has his sights set on completing the Horizon Rocket and his undergraduate career. He has enjoyed working in the energy industry and designing components to be used on pipelines.

“I always thought it’d be cool to be an astronaut,” he says, “but I might think of another idea that will snowball, too.”