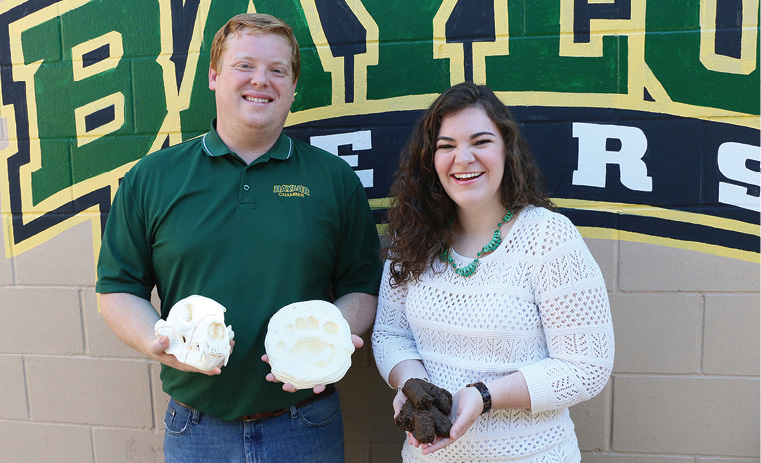 As many as 20 school groups visit Baylor’s Bear Habitat in one week. And each group receives a guided tour conducted by student members of the Baylor Chamber of Commerce—the official keepers of the live bear mascots. Chamber members have been sharing their bear knowledge with visitors for decades, but when Chamber wanted to develop a more formal program for school groups, they turned to the School of Education (SOE) for help.

“It’s much more than we expected,” said Dr. Martha Lou Scott of the new curriculum developed by SOE students. Scott, associate vice president for student life and Baylor’s liaison with the bear trainers and the USDA, holds a BS in education from Baylor and an EdD in educational psychology. “They completely designed curriculum for different age groups and then added the bear box?”

Over the spring semester, a team of three education majors, led by senior Alex Farrell, worked to develop lesson plans for K-2, 3-5, and secondary grades. Farrell, a May 2014 graduate, suggested the bear box, a collection of hands-on items to supplement the lessons. Farrell has a particular interest in developing curriculum for museums, and she did an internship in the spring at Waco’s Cameron Park Zoo, where hands-on materials are popular.

The bear box includes a replica bear claw, tooth, skull and paw print, plus a real pelt. Farrell said it helps kids to have something tactile as part of the lesson. “For younger kids, it’s harder to think abstractly,” she said. “If they can see the actual three-dimensional paw print, it’s easier for them to understand how big it actually is.”

But the hands-down most-asked-about item in the bear box is the fake bear poop, according to Chamber bear trainer David Hornbeak, who graduated in May with a BA in speech communications and political science.

“Believe it or not, poop is one of the questions we always get. Where do they poop? What do you do with it? Things like that,” Hornbeak said. (They triple bag it and throw it away.) “There’s an art form to scooping it,” he added. “You’ve got to do it just right.”

While the bear trainers know a lot about bears, the education students brought a different perspective, said Dr. Sandi Cooper, professor in the SOE’s Department of Curriculum and Instruction, who recruited the team of SOE student volunteers. “Our students were able to build fun lessons that connect to the TEKS [Texas Essential Knowledge and Skills] that teachers need to cover for science-related topics about animals and their habitats,” she said.

Hornbeak said the new curriculum will help Baylor attract more school groups when fully implemented this fall. “We needed a program that was well written and well defined, where teachers know exactly what’s going to be taught so they can incorporate it into their teaching for the rest of the day,” he said. “It really helps solidify what we’re doing here, and it gives it some validity, too.”

Helping Farrell with the curriculum were recent SOE graduates Bryce Kunkel and Kevin Sikes, who is also a Chamber member. Also on the team were SOE students Jordan Barlow, Paige Koester and Rachel Vaughn.

Clint Patterson, BA ’05, MSEd ’07, who is the training advisor for the Bear Program and an advisor for Chamber, said the partnership between the Division of Student Life and the School of Education is an example of the high-caliber students at Baylor. “Both teams united in a common goal and shared a deep passion for their school, all while elevating the bear program’s educational mission,” he said. Patterson is Baylor’s coordinator of fitness and was a student member of Chamber.