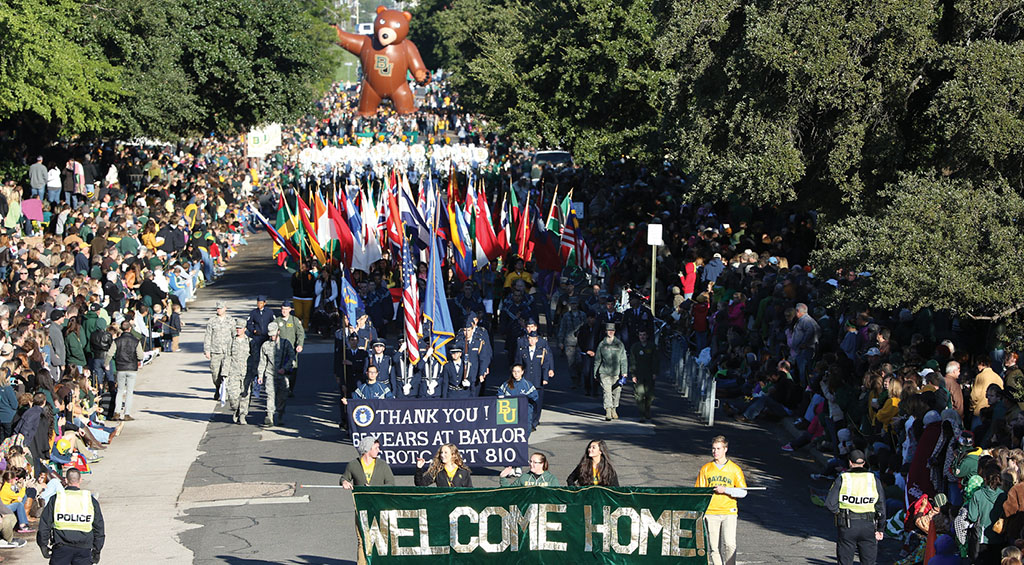 Baylor alumnus and physician Thomas J. Rosenbalm has given a major gift that will provide for significant renovation to the campus’s historic Fifth Street—home to many cherished University traditions, such as Homecoming, Diadeloso and Christmas on Fifth. The gift, which has an approximate value of $8 million, was made in honor of his father and mother.

The renovations to Fifth Street will be anchored by a signature fountain that will be named in memory of Dr. Rosenbalm’s parents, the late Clarence and Claudia Rosenbalm of Bartlett, Texas.

“We are deeply grateful to Dr. Rosenbalm for his profound expression of love for Baylor embodied in this remarkable act of generosity that will further beautify our campus,” said Baylor President and Chancellor Ken Starr. “This gift will allow us to transform Fifth Street, which is so much a part of our most meaningful University traditions, and otherwise re-envision an extraordinarily meaningful space on our campus in a manner that will suitably honor the memory of Clarence and Claudia Rosenbalm and the value they attached to higher education.”

A native of Bartlett, Rosenbalm earned his bachelor’s degree in biology and chemistry in 1950 and his master’s degree in biology in 1951 from Baylor and was a member of the honorary society of Beta Beta Beta in biological sciences. He went on to complete his MD at Baylor College of Medicine in Houston in 1955. Upon finishing his internship in San Diego, Rosenbalm joined the United States Air Force and served for two years in Japan. The remainder of his lengthy career was spent as a family practitioner at North Shore Hospital in Houston, and he served on the board of directors of Hospital Affiliates International, now Hospital Corporation of America. He served the medical needs of East Houston until his retirement in 1985. Both his daughter, Dr. Laura R. Carpenter, BSEd ’91, MA ’93, and son-in-law, Dr. Robert Carpenter, BS ’90, MCG ’91, MBA ’93, are Baylor graduates.

Project details are conceptual, but the redesign is expected to include major aesthetic and infrastructure improvements to Fifth Street, as well as the addition of the Rosenbalm Memorial Fountain. The area scheduled for the improvements stretches from the Bill Daniel Student Center down Fifth Street to the circular drive at Speight Avenue, near McMullen-Connally Faculty Center and Bobo Spiritual Life Center. Construction is expected to begin in spring 2015 and scheduled for completion by fall 2015.