Baylor>Alumni, Parents & Friends>Baylor Magazine - Fall 2014>Building Tradition
In February 2015, Baylor will celebrate 170 years of growth and change and tradition. Through the generations, Baylor Bears have enjoyed places, activities, and events on campus where they found their callings, made enduring friendships, and set their courses for lifelong journeys. As Homecoming 2014 approaches, we look back over the past seven decades with great pride and appreciation for the leadership and actions that laid the foundation for Baylor’s unprecedented progress.

While there is no way to cover every interesting and significant event through each decade, we hope you enjoy a sampling of significant milestones, memories and traditions—some of which have come and gone and others that have grown stronger—that have shaped today’s Baylor experience.

If we missed one of your favorites, please share it with us at magazine@baylor.edu 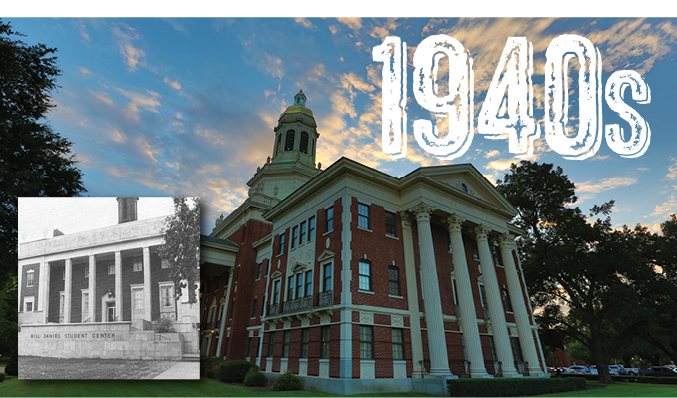 Two iconic campus buildings became part the University skyline in the 1940s. Pat Neff Hall was formally dedicated in 1940. “Praise God From Whom All Blessings Flow” was the first song to ring out from the newly constructed tower on the eve of the ’40s—Dec. 21, 1939. The 25 tubular chimes, donated by Cullen F. Thomas of Dallas, operated until 1985 and were succeeded by the 48-bell McLane Carillon in 1988. The long-delayed Student Union Building was completed and dedicated at Homecoming 1948.

The Baylor Symphony Orchestra was organized in fall 1943 and made its debut in 1944. 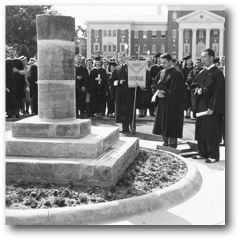 To celebrate the Baylor Centennial in 1945, the campus dedicated pillars honoring University founders William Tryon and James Huckins, numerous live oak trees and the Founders Mall Centennial Monument, constructed of stones from Baylor buildings at the Independence and Waco campuses. 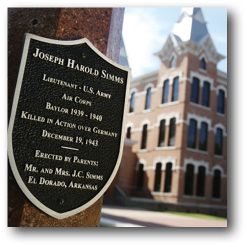 Homecoming was suspended from 1943-45 due to the war, but resumed in 1946, with activities including the dedication of 125 memorial lamp posts. 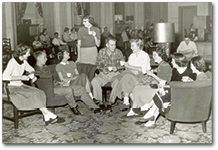 Dr Pepper Hour had its origins in 1952, when the first “Coffee Hour” offered coffee and “frosted coffee” to visitors in the Student Union Building.

Baylor awarded its first PhD degree in May 1954—100 years after the University granted its first-ever degree. Baylor also began programs in honors and foreign service.

In 1956, Baylor was the site for the South’s first racially integrated debate tournament, with future Congresswoman Barbara Jordan as one of the competitors. 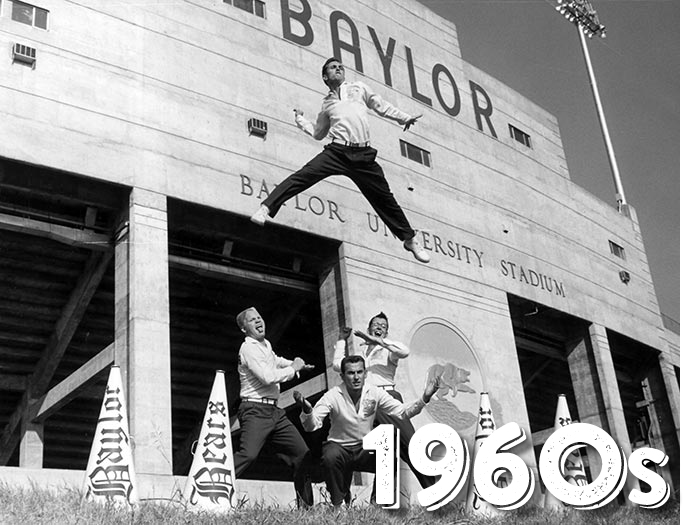 Two important Baylor traditions date back to the early 1960s. Baylor yell leaders are credited with introducing the famous Sic ‘em “bear claw,” while the first Parents Weekend, now Family Weekend, was held in March 1961. About 1,000 parents attended the activities.

In 1961, Baylor was one of the first universities in the country to be visited by the newly formed Peace Corps. By 1965, Baylor’s tradition of service to the world was evident as 45 Baylor student volunteers were serving through the Peace Corps across the globe.

Howdy Week also made its debut in September 1962, and the popular spring campus holiday known as May Day was renamed Diadeloso (Day of the Bear) in 1966.

Baylor’s first computer arrived on campus in 1962. The massive machine, an IBM 1620, was purchased for $40,000 with funds from a donor. The first computer courses were taught in spring 1963 by Dr. Helen Ligon of the Hankamer School of Business.

A long legacy of excellence in Baylor track and field was strengthened in 1960 when the Bears captured their first Southwest Conference track championship. 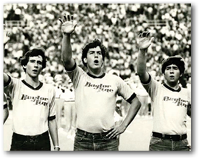 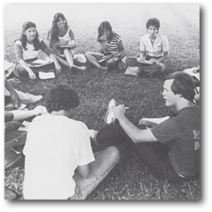 The Baylor Line, a spirit organization for freshmen men, was organized in 1970 and later expanded to include freshmen women. Over the years, Baylor Line members have become an important means of marshaling Baylor spirit during home football games.

The first Welcome Week for incoming freshmen and transfers was held in August 1979.

While there were many memorable events in the 1970s, few became legend like “The Miracle on the Brazos.” That was the name given to Baylor’s unbelievable 1974 football season, which saw the Bears, led by coach Grant Teaff, capture their first Southwest Conference championship in 50 years.

The Baylor Mace, a representation of our rich history, was first carried in a commencement ceremony in May 1974. The mace includes canes belonging to Rufus Burleson and Sam Houston and a sword presented to Cyrus Alexander Baylor, the brother of Judge R.E.B. Baylor, by President Andrew Jackson for bravery in battle.

The Baylor Marina opened for students and guests to enjoy water sports on the Brazos River. 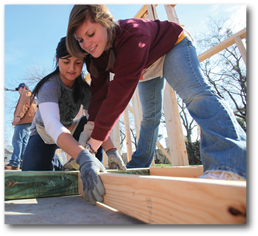 The first collegiate chapter of Habitat for Humanity was formed at Baylor in 1987.

Steppin’ Out, when Baylor students, faculty and staff step out into the Waco community to perform service projects, was first held in spring 1985. 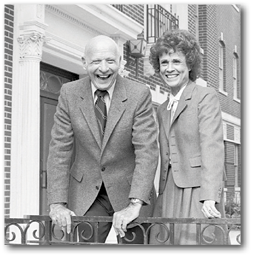 With the 1996 season, Baylor athletics began participating in the new Big 12 Conference.

On April 18, 1996, Baylor invited the public to the “Miracle on Fifth Street Dance,” held on Fifth Street in front of Burleson Quadrangle. The event officially broke the 151-year-old campus ban on dancing. President and Mrs. Robert Sloan were given the honor of the first dance.

When Baylor scored an upset victory over Texas on Nov. 1, 1997, delirious fans pulled down one of the goal posts and carried it back to campus.

Baylor won its first Big 12 championship in any sport on Nov. 1, 1998, as the women’s soccer team defeated the No. 9 ranked Nebraska Cornhuskers 1-0 in Waco. This was the third year for the Baylor soccer program.

Baylor Regents voted to establish the first seminary at Baylor since the early 1900s. George W. Truett Theological Seminary held its first classes in 1994. The Baugh-Reynolds Campus opened in January 2002.

Judges Joy and Lady, the two current bear mascots, arrived on campus in the early 2000s. Joy was officially introduced in June 2001 with her biological sister, Lady, appearing in June 2002. 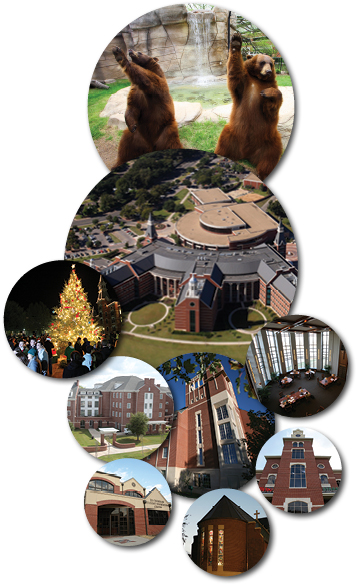 On Nov. 29, 2001, the first Christmas on Fifth Street celebration was held at Baylor, featuring the annual KOT Christmas tree lighting.

In fall 2004, students moved into the North Village Residential Community, the first on-campus residence hall constructed in 37 years. The complex was dedicated at Homecoming.