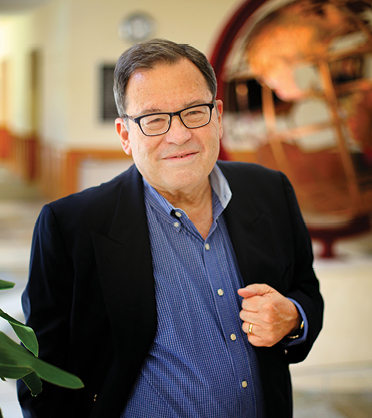 Renowned international preacher and minister Joel C. Gregory, who gave his first sermon at age 16, marked the 50th anniversary of his service during a celebration on June 17 at The Church Without Walls (Brookhollow Baptist Church) in Houston.

Gregory is professor of preaching at Baylor’s George W. Truett Theological Seminary and founder and president of Joel Gregory Ministries, an international ministry of teaching, preaching, counseling and writing. For nine years, he has been the summer guest preacher at The Church Without Walls.

“Dr. Gregory is known throughout the land as the prince of preachers—a brilliant, insightful interpreter of Scripture and a passionate proclaimer of the Gospel,” said Baylor Interim Provost David E. Garland, professor of Christian Scriptures at Truett, who expressed appreciation for Gregory’s ministry during the celebration in Houston. “The tribute paid to him with people coming from across the nation to honor him was well-deserved. He has had a vital impact on the teaching of preaching at Truett.”

More than 800 people attended the celebration, including Dr. Ralph D. West Sr., pastor/founder of The Church Without Walls and an adjunct professor at Truett; Baylor President and Chancellor Ken Starr; and Truett Interim Dean Dennis Tucker, all of whom recognized Gregory’s ministry milestone.

Gregory, who has served two terms as president of the Baptist General Convention of Texas, preached his first sermon in June 1964 at Connell Baptist Church in Fort Worth.

“At 16, the ministry was nothing more than a strong sense of call, a vocation that came with more concreteness and certainty than anything else in my youth,” Gregory said. “What that call would involve was a blank tablet. My greatest aspiration then and throughout undergraduate days was the dim hope that someone, somewhere, would call me to be a pastor …

“The future extended before me in one word—a ‘Call’ that has never disappeared.”

He holds bachelor’s and doctoral degrees from Baylor and a master of divinity degree from Southwestern Baptist Theological Seminary. Among his former pastorates are Travis Avenue Baptist Church in Fort Worth and First Baptist Dallas. He has authored or edited eight books, including Baptist Preaching: A Global Anthology, released in June by Baylor University Press.

He said his most poignant memories of his ministry are not of “embracing the crowds or great platforms or large churches or radio and television preaching.” Rather, he said, they are such reminiscences as the alcoholic who was the first person he led to Christ and baptized in his first pastorate, and of the woman he prayed with in his first hospital visit as a pastor.

These days, he said, “A large surprise is what is yet before me. The opportunity at Truett to teach with beloved colleagues extends into its 10th year with all encouragement to continue that teaching. Last year, I preached or taught 200 times in 20 states, Oxford, Jamaica and Rome. The calendar ahead looks similar. I have a reverent agreement with the Lord. I do not seek places to speak; they seek me if I preach at all. When that seeking stops, so will I.

“Life has sweetly come full circle, back in Waco and back at Baylor as a home base,” he said. “That may be the biggest surprise of all.”

At the event’s conclusion, Starr gave thanks for Gregory’s “magnificent ministry” and his teaching at Truett.

He likened the celebration to “a family reunion, a ‘foretaste of glory divine.’”