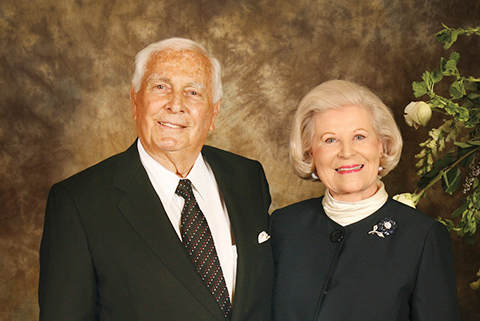 The Waco community has lost a most remarkable and generous man whose life touched so many people—on campus and beyond.

Waco-native Lupe Zúñiga remembers driving past the Ted and Sue Getterman Wellness Center on the corner of Highway 6 and Bosque Boulevard while a high school student at A.J. Moore Academy. She knew the name “Getterman” but nothing more. That soon would change.

“It wasn’t until I actually joined the Baylor family that I learned everything that Mr. and Mrs. Getterman have contributed to Waco,” Zúñiga said. “They’re truly Waco gems.”

A Baltimore, Md., native, Getterman came to Baylor after serving in World War II with the U.S. Army Signal Corps. He earned a Bachelor of Business Administration, followed by a Juris Doctor two years later. While at Baylor, Getterman met Sue Holt, the love of his life, who he married in 1948. Among his many leadership roles in the community, Getterman served two terms as Waco mayor.

“When I read about his passing, I was emotional,” Zúñiga said. “The Gettermans come up in conversation a lot—anytime I talk about how I got into teaching or even how I got into Baylor.”

Zúñiga, one of more than 220 students who have received one of over 300 Getterman endowed scholarships, readily acknowledges that their assistance made her pursuit of a Bachelor of Science in Education possible. She said Ted Getterman genuinely was interested in the people in whom he invested.

“He was such a humble spirit, such an amazing man,” she said. “He was down-to-earth and willing to converse; he wanted to know about us, what we were doing and what our goals were. If it hadn’t been for their generosity and assistance, I wouldn’t be where I am today.”

That present location is Haltom High School in North Richland Hills where she teaches Spanish and English as a second language. Zúñiga, the first person in her family to attend college, said teaching was her lifelong dream. Through five years as a teacher, she sees how the Gettermans’ generosity has served many others through her.

“On average, I’ve taught about 150 students per year,” Zúñiga said. “That’s 750 students I’ve been able to reach and assist through the Gettermans. They made that possible.”

“I remember Eric telling Sue that he had never been to such a formal event, that he didn’t know what to do,” Dube said. “Sue told him, ‘You just watch what I do and you’ll be fine.’”

Salas graduated from Baylor in 2005 with a Bachelor of Science in Education and followed that with a master’s degree in history. It was that subject that allowed Salas and Ted Getterman to connect on a more personal level.

“I got to understand him way beyond the scholarship,” Salas said. “He was a big history buff, obviously a big World War II buff. He gave up a lot of his time on a personal level so that you could know there was someone there behind the scholarship. He was just an everyday kind of guy.”

Salas also readily acknowledges that he is “the suit guy.” At the dinner when he and the Gettermans first met, Sue Getterman noticed that the sport coat Salas was wearing did not fit him properly. As it turned out, he could not afford to purchase a jacket, let alone a suit. Shortly thereafter, the Gettermans took him to Dillard’s for a new suit.

“And he’s not the only one they did that type of thing for,” Dube said. One year at the endowed scholarship dinner, the Gettermans noticed that one of the scholarship recipients was not eating his tenderloin.

The young man needed to have his wisdom teeth removed; he was saving money and hoped to have enough to have them removed that summer. Within days, the Gettermans had contacted a local oral surgeon, who then contacted the young man to arrange an appointment.

“The student thought there was some sort of mistake,” Dube recalls. “He told them it certainly wasn’t for him, that he didn’t have insurance and couldn’t afford it.”

Of course, the finances already had been settled.

“He understood how blessed he was,” Salas said. “In that, he was practically giving it all away.”

Salas, currently a history professor at Tarrant County College in Arlington, said the word by which Ted Getterman should be remembered is service.

“He served everybody else,” Salas said. “He served our country. He served Baylor University. He served Waco. His legacy embodies that service. He reminded me that no matter what we’re doing, it should always be in service of others.”

Shortly after completing his undergraduate studies, Salas joined high school friend Justin Chapa to create a scholarship fund at their alma mater. Since 2007, the Chapa-Salas Scholarship has provided more than $24,000 in scholarships for Sam Houston High School graduates.

“What motivated me to get involved in that was to remember: It’s about service, and it doesn’t matter how old you are,” Salas said. “We established that scholarship when we were 24. All I had was $500 that I could donate; Justin had $500. So we said, ‘That’s a $1,000 scholarship; let’s do that every year.’ Now it’s $3,000 each year. Ted and Sue—they definitely were the inspiration for that.”

Ted Getterman’s influence on Baylor was not only through scholarships. He and Sue also made the largest gift to women’s athletics in the University’s history, resulting in Getterman Stadium—home of Baylor’s softball program that opened in 2000. A decade later, they provided funds for the Getterman Indoor Softball Facility.

“I never knew why, but their foremost concern with Baylor athletics was softball—the girls that played in this program,” Baylor softball head coach Glenn Moore said. “That those girls did not go without, that they were provided for, that they would have the best opportunity to be successful, not only on the field but in life.”

Moore said he never had a conversation with the Gettermans that didn’t end with, “Is there anything we can do for you?”

“And Ted meant it,” Moore said. “He truly wanted to help in any way he could. We’ll miss his friendship as much as anything. He would call and apologize for missing our games, even though his health was the reason he couldn’t be there. He knew the importance of being there physically and what his time meant, the time that he could give to others.”

That willingness to invest in other people’s lives beyond financial means resonated with the softball student-athletes. Over the years, the Gettermans have become more than just a name on the stadium.

“To see our athletes so often want to be a part of their lives and be around them, to go visit them, that was special,” Moore said. “The girls were just as excited as if they were seeing their grandparents for the first time in a year. I know there was a connection with Ted Getterman and vice versa.”

Bill Bailey, founder of Waco’s Bailey Insurance and Risk Management, met Ted Getterman through Sue while he was in law school at Baylor. A close friend and golfing buddy for more than a half-century, Bailey saw what Getterman meant to Waco, especially through his service to the area’s healthcare needs. Getterman served on the Hillcrest Health Foundation Board of Trustees, and the Gettermans supported many programs at the hospital.

“Ted was a very kind-hearted, compassionate person; he cared about people,” Bailey said. “He had a special place in his heart for Baylor and Hillcrest Hospital. He and Sue were very well known around town. People may not have known Ted, but they certainly knew who he was.”

Ted Getterman had many loves—his community, his church, his family and the students of Baylor University; however, Ted’s greatest love of all was his wife, Sue. Longtime friend and Baylor Vice President for Constituent Engagement Tommye Lou Davis said, “Ted was totally devoted to Sue. She was his partner and shares his passion for service to others. In his last moments of life, as he held Sue’s hand, he professed his love for her. Ted was a great man who truly will be missed.”

“With his dear wife, Sue, at his side, Ted Getterman was a faithful servant leader, generous with his time, resources and talent on behalf of Baylor University and the Waco community,” said Baylor President and Chancellor Ken Starr. “Ted has left an indelible mark on the alma mater he loved and the city he adopted as his own. His is a legacy of love and devotion. And while the Baylor family mourns his passing, we will never forget his remarkable example of steadfast commitment to that good old Baylor line.”