Nestled along the north side of T3 Highway a couple miles west of Ndola, Zambia, is a 640-acre tract of land ready for growth. It is fertile ground that already has been used to raise crops and cattle. Soon, though, it will be the site of a different type of growth.

Northrise University—the lone Christian university in Zambia—opened in 2004 with 50 students. Today, enrollment eclipses 600, and that number is expected to grow exponentially in coming years. Northrise petitioned the Zambian government for 30 acres; the government, impressed with the university’s success and vision, responded with more than 20 times that amount.

“They could be at 2,000 students in five years, and that’s a phenomenal growth rate for anybody,” Baylor Associate Vice President for Strategic Initiatives Chris Krause says.

As part of the University’s Pro Futuris vision that encourages global engagement through service, Baylor will partner with Northrise to help ease the growing pains. The initial step in the process came by way of a generous gift from Charles and Debra Stroupe of Paradise Valley, Ariz.

“There is a new term being used called ‘catalytic philanthropist,’” Krause says. “You have philanthropists now that don’t just write a check, but they get involved. They research the problem, they research the issue, and then they begin to apply their business acumen to solutions. Charlie Stroupe really is that kind of individual.”

Stroupe’s daughters attended Baylor, hence his connection to the school. According to Krause, it was Stroupe who introduced the idea of Baylor becoming involved in Zambia through ministry teams from the School of Social Work, Hankamer School of Business, and Baylor Athletics’ Sports Ministry program. Now, he’s looking to make a greater impact.

The gift from the Stroupes will provide funding for Baylor faculty, staff and students from Hankamer School of Business, Baylor Libraries and other areas to travel to Zambia to work alongside and with Northrise students and faculty.

Other aspects of the Baylor-Northrise partnership include research and business initiatives, including an extension of the “Message in a Bottle” program and semester-long internships for Northrise faculty development at Baylor.

“God has blessed us greatly with the Baylor- Northrise partnership,” Northrise President Moffat Zimba says. “Baylor, its faculty and students will have an immeasurable impact on Northrise, our community and our nation as we empower the people of Zambia one student at a time. We are beyond grateful.” 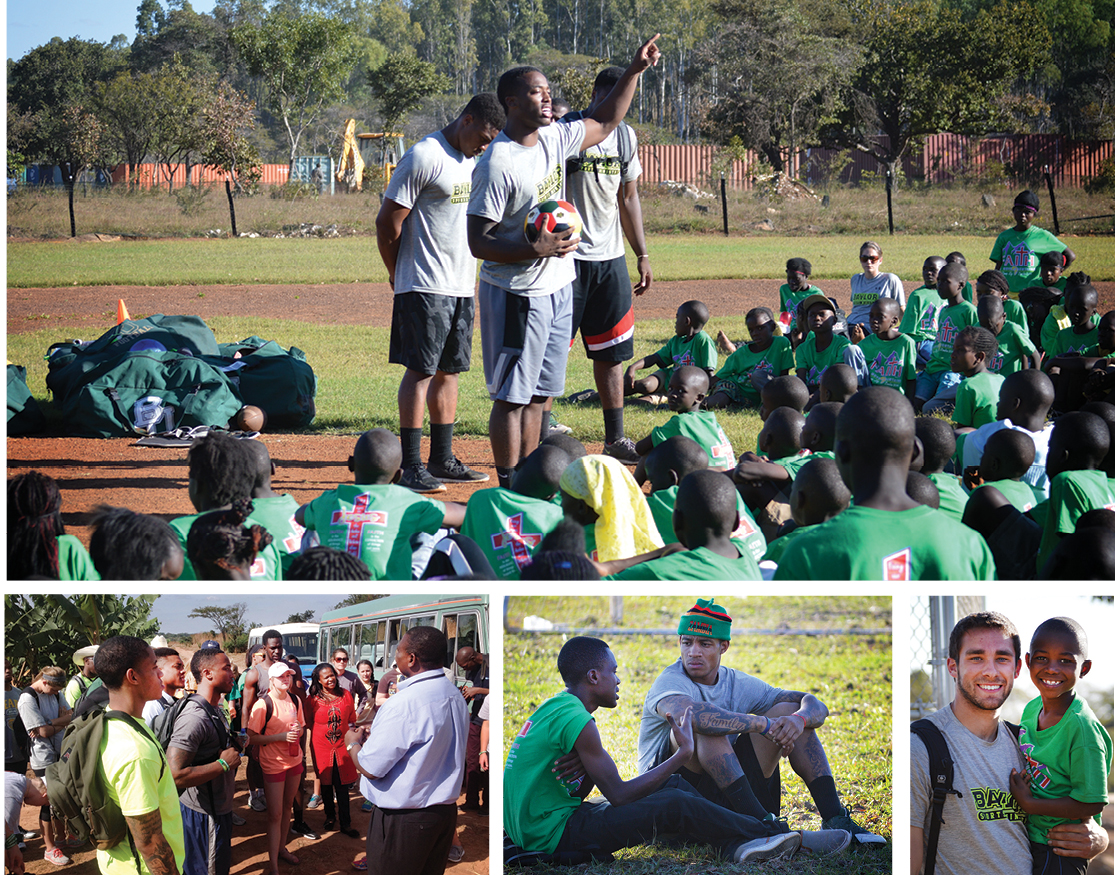 Much of the assistance from Baylor will come in terms of consultation and relationships. As Northrise grows and builds a new campus (for which ground will be broken on the 640-acre lot in July), many logistics questions arise.

“That’s really where we’re going to get heavily involved,” Krause says. “We have architects, and we have relationships with architects who can help evaluate from a university’s perspective. Baylor Missions in partnership with the faculty from the School of Business—and Baylor Libraries initially—will be able to provide Northrise a significant level of support.”

Beyond architectural plans and building management, Baylor already is helping Northrise with things such as library systems and providing online educational materials.

Northrise has a $30 million capital campaign for the new campus, and the farming on the land covered 60 percent of the university’s operating budget last year from the agricultural yields. Portions of the land will continue to be used for farming and supplemental income.

Just as the ground is fertile in that sense, Zambia is fertile ground for the spreading of God’s Word. With a population of just under 15 million, Zambia is predominantly a Christian-culture nation. However, it also is one of the most economically and socially encumbered. Zambia’s Human Development Index, which measures education, income and life expectancy, ranked 164th out of 187 countries in 2013. By comparison, the United States ranked fourth. 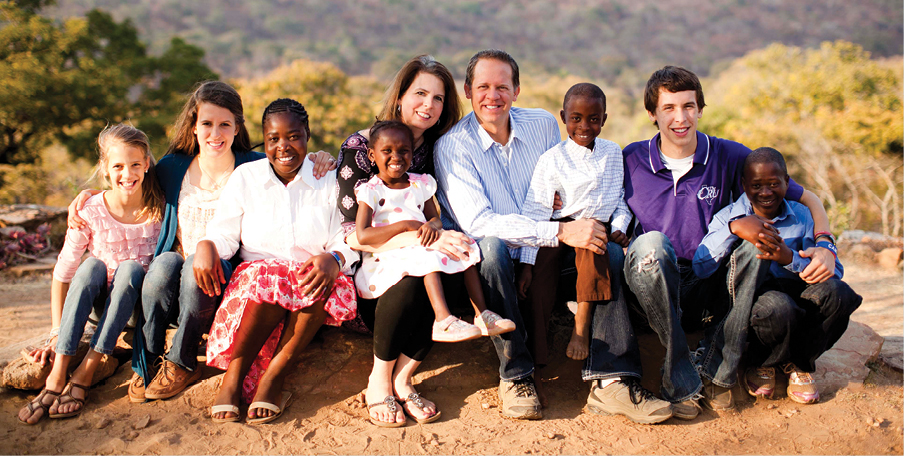 Family Legacy Ministries is having a transformative impact on the difficult lives of orphans in Zambia. Pictured here are founders Susan and Greer Kendall with their daughters, Kaleigh and Karis, son Jonathan, and a few of the children in their care.

One person who has seen the trials and tribulations of Zambia first-hand is Greer Kendall, BBA ’86. Born to American missionaries in Zambia, Kendall decided to revisit his native country in 2000—years after his family returned to the United States when he was six years old. Out of that trip was born Family Legacy Ministries, a non-profit organization out of Dallas that works directly with orphans in Zambia.

“It really was almost a fluke,” Kendall says. “I didn’t come back to Zambia thinking, ‘We need to start a non-profit working with orphans.’ I was just coming here on a mission trip. But it was pretty clear that year; we came three times in about four months.”

Kendall says it was on their third trip that he and his wife Susan, BBA ’87, had their eyes opened and realized that children were everywhere in the middle of the day.

“I asked the taxi driver, ‘What are all these kids doing? Is it a holiday or something? Why are they not in school?’” he recalls. “The taxi driver looked at us incredulously and said, ‘You don’t know? We have a problem here with orphans.’ That was the beginning of (my) understanding.”

Zambia has the world’s highest per-capita orphan rate with more than 1 million parent-less children. This is in a country where the death rate is alarmingly high because of HIV/AIDS, alcoholism and prostitution.

“There is a fatalism in this culture that basically says ... it’s never going to change,” Kendall says of the mindset in Zambian slums. “They’re told, ‘You’re a curse; chase your mother to the grave.’ Nobody has the capacity to take care of them.”

Family Legacy Ministries is committed to changing that culture, working with over 50,000 orphans through camps during the past 14 years. That number sounds like a lot, but consider: That is only 5 percent of the nation’s orphan population. The organization began schools four years ago, and that is where the paths of Family Legacy Ministries and Northrise eventually will cross.

Another person who has seen Zambia’s plight is Wes Yeary, director of Baylor’s Sports Ministries. He began taking Baylor student-athletes to Africa six years ago, starting in Kenya. In 2013, they split time between Kenya and Zambia. This summer, they spent the entire two weeks in the latter.

“In our fifth year there in Kenya, we completed a lot of projects and saw a lot of things grow and become self-sufficient,” Yeary says. “We thought this would be a great opportunity to take this invitation from Northrise and explore possibilities of partnership with Baylor.”

This year, the Sports Ministry team coordinated sports clinics at Northrise, teaching children about Christ through personal testimony and the use of what Yeary calls “Gospel balls.” These multi-colored sports balls include Bible verses, and the colors represent various facets of one’s relationship with Christ.

“As they go through the clinic, those children learn those colors, and they go through the Gospel together and the scriptures that tie with each color,” Yeary says. “We do that every day while we’re there. The green in the colors represents a growing relationship with Christ and that He has called us to walk with Him every day.”

While in Zambia, the Sports Ministry team also spent time in Kabwe and in Lusaka with Family Legacy. The team of 44 student-athletes and a handful of staff members worked with children, sharing the Gospel and loving the unloved.

“No matter where we were or how poor the community, we seemed to always have people who thanked us for coming and caring,” Yeary says. “It’s a fertile ground, very open and receptive.”

Yeary’s team also gave out thousands of pocket-sized Gospels of John, thanks to funding provided by Baylor alumnus Bob Barkley.

“The balls that we leave, the equipment that we’re able to give to them and even some of the uniforms, the building or the painting that we do—all of that fades,” Yeary says. “But to be able to share the Word of God and the hope we have in our relationship with Him, that lasts.”