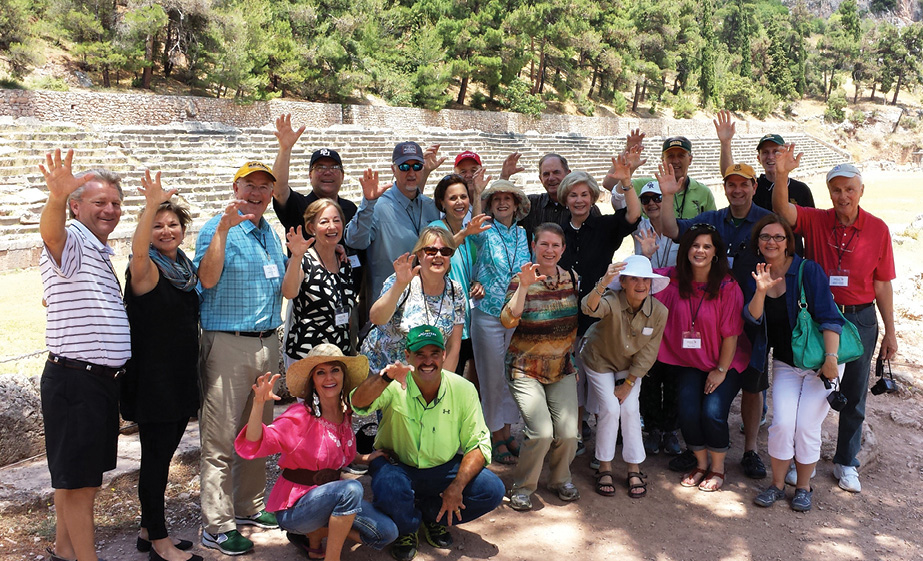 Around the world, Baylor University students are both studying and serving during summer break. Academic programs in 51 countries broaden horizons and deepen insights during these transformation years of young adults who call Baylor—and Waco—their adopted home. Literally hundreds of other Baylor students embarked this summer on University-sponsored mission trips that help bring hope and encouragement to some of the world’s poorest people.

Baylor alumni are also exploring new frontiers under the proud banner of the Baylor Bears. A group of 30 alumni and friends returned to Texas soil from a week-long inspirational journey led by Waco’s own Dr. Todd Still, William H. Hinson Professor of Christian Scriptures at our beloved Truett Seminary. The journey brought the Baylor delegation to magnificent Grecian ports of call in retracing the Apostle Paul’s second missionary journey.

This dramatic story, as recounted by Luke in the Acts of the Apostles, is well-known to Christians around the world. A nocturnal vision at Troas (near ancient Troy in present-day Turkey) led Paul and his companions (including the physician-chronicler Luke) to jettison their original itinerary and cross the Aegean Sea to Macedonia (biblical Neapolis, now the charming Greek port of Kavala).

From there, Paul and his traveling party journeyed by land 15 miles to Philippi, where they found a group of “God-fearing” (Gentile) worshipers gathered around the beautiful Ganges River. There on the slopes of stunningly beautiful Balkan foothills it began: The Christian message of love and redemption—destined to change the course of Western civilization—had reached European soil.

But resistance came, and it was fierce. In flagrant violation of Paul’s rights as a Roman citizen, Paul and his missionary partner, Silas, were mercilessly flogged in the Philippian marketplace for challenging pagan culture with their new message. Troubles and travails followed these intrepid missionaries to the beautiful port city of Thessalonica on the northern coast of the Aegean.

Chased again out of town, onward they traveled (50 miles to the west) to the gorgeous hillside city of Berea, where their message of Jesus’ love was met with favor. Troubles and affliction soon erupted again, however, and for safety Paul journeyed southward to Athens where he preached—without violence or even threat of persecution—a magnificent sermon on the Areopagus (Mars Hill), located in the shadow of the magnificent monument to Athenian greatness, the Parthenon.

Filled with philosophers and educators eager to hear new ideas, Athens was only a brief Pauline stopover, as the mission’s destination was Greece’s mightiest city of trade and commerce, Corinth, 50 miles southeast of Athens. Paul’s goal was to transform lives, not to launch a new school of philosophy or theology. So in bustling, sensual Corinth, Paul remained in ministry for 18 months. In this beautiful port city touching on two seas (the Ionian and the Aegean), the Apostle who once had persecuted the young church put down temporary roots and worked in his tent-making trade alongside Priscilla and Aquila, Christian converts who for their part had been cruelly exiled with their fellow Jews from imperial Rome.

Inspired by Professor Still’s illuminating lectures along the way, the hearty band of Baylor Bears (alumni and friends of all ages) saw first hand—in a deeply moving way—the path of a faith that not only endured relentless persecution over several centuries but spread globally to become (and remains to this day) the single largest faith community in the world. In virtually countless ways, Baylor students, alumni and friends are truly “flinging their green and gold afar”—and learning powerful lessons along the way in their own transformational journeys.

June 1-10, 2015: Save the date for the next educational and spiritual trip exploring ancient universities, sanctuaries and wonders of Great Britain with Dr. Todd Still. Watch baylor.edu/alumni/travel for details.