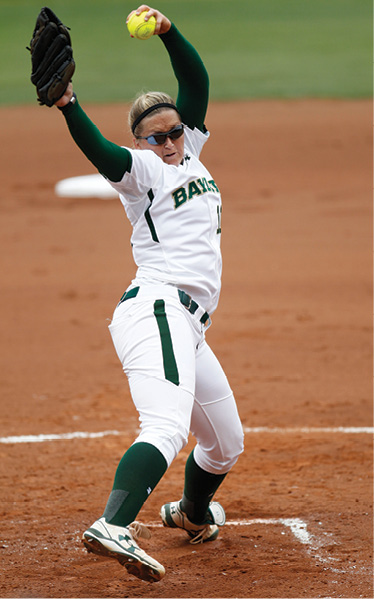 Whitney Canion picked up two more milestones in her highly decorated Baylor Softball career this season. The senior became just the seventh pitcher in Big 12 history to pick up 100 victories en route to being named a finalist for the USA Softball Collegiate Player of the Year award.

Canion reached the century mark with a dominant shutout win over then-No. 12 South Alabama in Gulfport, Miss. The 1-0 victory was also her 33rd career shutout and 98th complete game.

Her stellar senior season has not gone unnoticed. On April 10, Canion was named as a Top 25 Finalist for the 2014 USA Softball Collegiate Player of the Year. Canion earned the nod after she was one of 50 players selected during the preseason for the USA Softball watch list, which was later narrowed to 25.

After two medical redshirts, Canion is in her sixth year with the program and holds virtually every major career pitching record for Baylor, while climbing to the top 10 in the Big 12 record book.

"Whitney has been a staple of our program, and obviously one of the better pitchers to ever come through the Big 12," Baylor head coach Glenn Moore said. "But, honestly she's an even better person than a player, and she is a great representation of Baylor softball, Baylor athletics and Baylor University." 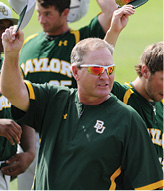 Baylor women's basketball coach Kim Mulkey and baseball coach Steve Smith both recorded landmark victories this year. Already the winningest coaches in Baylor history in their respective sports, Mulkey and Smith set new standards not just individually, but for their programs as well.

Smith picked up the 700th win of his career Feb. 23 in Baylor's 12-1 victory over Austin Peay. He joined elite company with the win, becoming just the 36th active NCAA Division I coach to reach 700. In his 20th season at Baylor, Smith is Baylor's all-time wins leader in all sports. 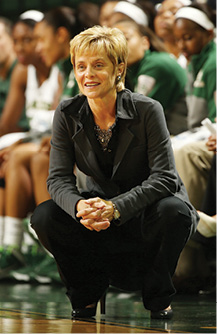 Mulkey reached the 400 win mark in 13 years and 32 games. Only her mentor, Leon Barmore, who coached Mulkey at Louisiana Tech and later served on her staff at Baylor, reached the milestone faster. 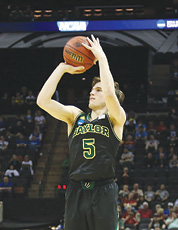 Heslip hit 18 shots from long distance, defeating Travis Bader of Oakland in the nationally televised State Farm College 3-Point Championship. The Burlington, Ontario, native, wrapped up his Baylor career ranked 20th in career scoring with 1,140 points, and he finished as the school's all-time leader in 3-point field goal percentage at .437, making 301 of 689 career 3-point attempts. Heslip was so far ahead of the second-best Baylor 3-point shooter that he could've attempted and missed 75 more 3-pointers and still would've been Baylor's all-time leader. His 301 career 3-pointers made rank second in program history, trailing only the 388 made by LaceDarius Dunn.

He also finished the 2013-14 season with a .465 3-point percentage, which ranked ninth all-time on the Big 12 Conference single-season list, his 118 3-pointers made this season tied for second-most ever by a Big 12 player, his 301 career 3-pointers made rank fifth in conference history, and his .437 career 3-point percentage ranks third on the league's all-time list. 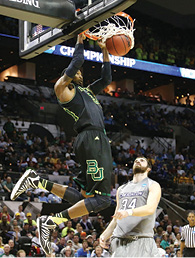 Jefferson, a fifth-year senior from Killeen, Texas, finished his Baylor career ranked 19th in school history with 1,159 career points, 10th with a .543 field goal percentage, ninth with 722 rebounds, fourth with 166 blocks, tied for fourth with 25 double-doubles and third with 95 career wins. Over Jefferson's four years as an active member of the roster, Baylor won 107 games. He sat out the 2010-11 season as a redshirt.


Are you looking for more News?
All NewsArchives