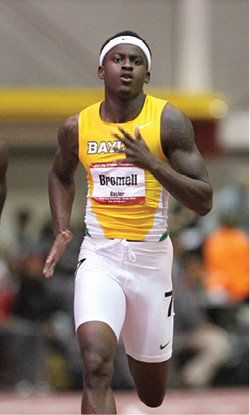 The honors kept rolling in for Baylor track and field freshman Trayvon Bromell on Wednesday as he was named the Big 12 Male Athlete of the Week for a second straight week, the conference office announced.

Trayvon Bromwell, a freshman from St. Petersburg, Fla., clocked a world-leading time of 10.01 to win the 100-meter dash at the Texas Relays in Austin on March 29. That mark equaled the World Junior record for the event, while breaking the Baylor school record and the Texas Relays record.

Bromell now owns both the NCAA’s fastest 100- and 200-meter times this season. He won the TCU Invitational 200-meter title in a time of 20.23 on March 21 in his collegiate outdoor debut. That mark was sixth-fastest in BU history with all five faster times belonging to former 200-meter world record holder Michael Johnson, BBA ’90.

With his win in the final, Bromell entered into a four-way tie atop the World Junior record book with Darrel Brown (Trinidad, 2003), Jeff Demps (USA, 2008) and Yoshihide Kiryu (Japan, 2013).