Hart and soul of Baylor track 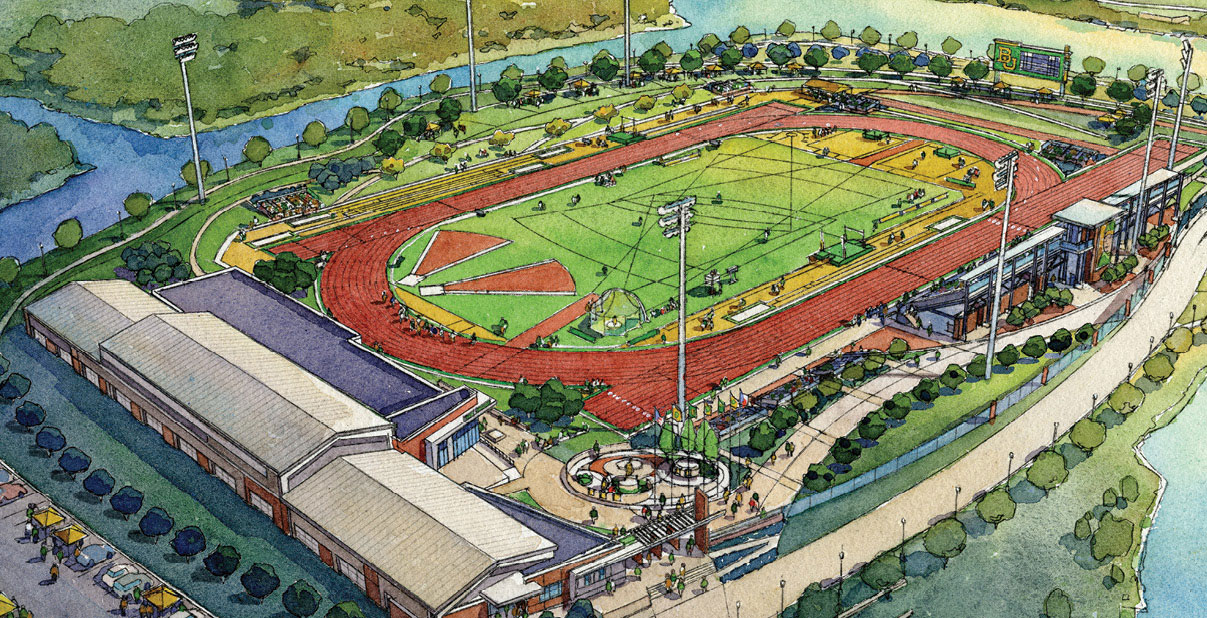 The new facility—designed by Kansas City-based Populous, which also planned McLane Stadium—will accommodate 5,000 spectators and participants. Located adjacent to the new football stadium, the track and field facility is slated for completion in time for the 2014-15 season.

In addition to a state-of-the-art track and outstanding venues for field events, Clyde Hart Track and Field Stadium will offer a range of facilities and amenities including:

The 13,500-square-foot Lewis A. and Training Center, featuring an indoor practice facility;

A 6,000-square-foot team facility containing the Winston Wolfe Clubhouse; and

One of the nation’s most successful and prominent programs, Baylor’s track and field teams have produced nine Olympic gold medals, 36 NCAA championships and more than 600 All-America performances. On Feb. 14, Baylor’s Board of Regents approved naming the new facility in honor of Clyde Hart, a 1956 Baylor graduate who served 42 years as Baylor’s head track and field coach before retiring in 2005 to become director of track and field.

“Baylor’s track and field program has enjoyed a national and international reputation for excellence under the guidance of Clyde Hart and Todd Harbour, BSEd ’81, over the past five decades,” said Ian McCaw, director of athletics at Baylor. “From NCAA and conference titles to the gold medals won by Michael Johnson, BBA ’90, and Jeremy Wariner in recent Olympic Games, the achievements of Baylor track athletes have made the school’s name synonymous with success. This new, on-campus facility will be among the best in the nation and ensure that Baylor track and field’s future will be bright.”

Former track and field athletes and Baylor supporters have rallied around the program’s return to campus. In April 2012, the University received a lead gift from Baylor track letterman Richard Woodall, BBA ’80, MSEco ’81, and his wife, Donna, in honor of his father and mother, Lewis and Mary Woodall. Following the Woodalls’ lead, others made major gifts to Clyde Hart Track and Field Stadium that have enabled the realization of the facility’s fully desired scale and components. Overall, more than $8 million in private gifts have been committed to the project, led by several key members of the Baylor family including a number of former athletes, alumni and friends.