For the third straight season, a Baylor Lady Bear brought home the Heisman of women’s basketball 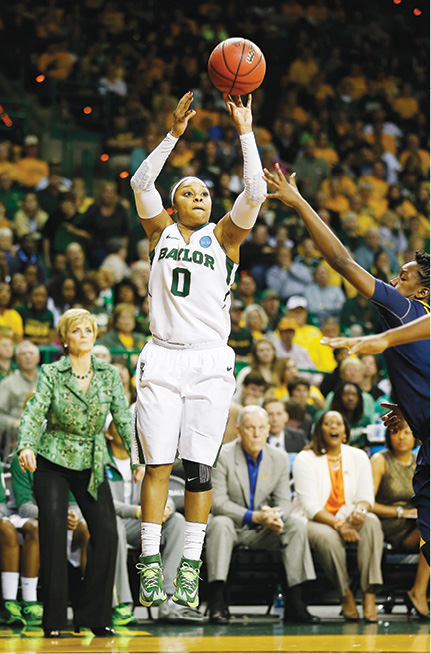 Outgoing senior Odyssey Sims received the 2014 Wade Trophy from the Women’s Basketball Coaches Association (WBCA) in Nashville on April 7 (an award received by Brittney Griner in 2012 and 2013). The Wade Trophy is the oldest women’s basketball national player of the year honor, dating back to 1978; based on that history, it is sometimes referred to as “the Heisman of women’s basketball.”

Sims moved into the spotlight in her senior year, and the four-year starter directed the team to a 32-5 record. The young squad played the undefeated and eventual national champion UConn Huskies to a closer margin than anyone did all season, losing 66-55.

As Baylor’s top offensive weapon, Sims became the second woman in Division I history to score 1,000 points in a season, finishing a mere eight points shy of the NCAA record. Her 28.5 points per game set a Big 12 record as well as the Baylor record, which had been 24.6 ppg set by Suzie Snider Eppers, BSEd ’77, in 1976-77. She leaves Baylor as the Lady Bears’ all-time leader in career 3-pointers and assists; she also ranks among the top 5 in steals (second) and points (third).

The Wade honor capped a long line of kudos for Sims this spring: