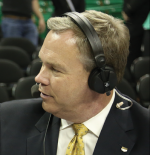 During every football game for a quarter of a century, John Morris, BA '80, has been at the microphone, covering Baylor football on what is now the Baylor IMG Sports Network.

When Baylor played Oklahoma State on Nov. 23, "The Voice of the Bears" called his 300th straight football game, continuing a streak that began in 1988 when he became a full-time member of the Baylor Radio Network and worked alongside his hero and mentor, the legendary Frank Fallon, '53.

"I had to get over hero worship the first game I ever did," Morris reminisced. "I called him Mr. Fallon on the air. He leaned over and said, 'You can call me Frank.' Those years I worked with him were the best learning experience I ever had."

During his tenure, Morris has had the chance to call some of the most memorable games in Baylor history.

Morris' Baylor roots go far beyond the broadcast booth. He followed his parents, Sid, BA '58, and Brenda, who worked as a residence hall director in addition to attending Baylor, to campus, then met his wife, Terri, BSEd '85, at Baylor. Their daughters, Meagan, BA '11, MSEd '12, and Maddie, a junior, are continuing the legacy.