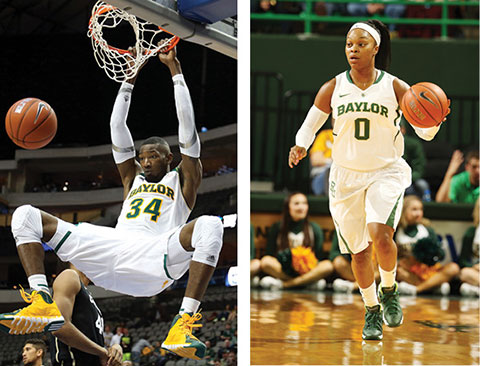 Cory Jefferson and Odyssey Sims have both experienced deep tournament runs and championships, both are senior leaders and focal points for the 2013-14 Baylor basketball teams and both are counted on to help replace the previous year's top scorers--Pierre Jackson for the men and Brittney Griner for the women.

They also have the shared experience of earning spots on the Team USA men's and women's basketball rosters this past summer, playing for their country at the World University Games in Kazan, Russia.

"It was a blessing and a great opportunity to wear the USA on your chest and represent the country," Jefferson said of his first Team USA experience. "Knowing that people have noticed that you've been working hard and made a difference in your game enough to get invited is something I thank God for."

The trek to Russia marked a second tour on the national team for Odyssey, who became the first woman to win two gold medals with Team USA at the World University Games.

"It means a lot just being able to have the opportunity to play for Team USA," Odyssey said. "It's a great experience to be around a lot of different personalities and to learn from everyone there."

Odyssey, the 2013-14 Preseason Big 12 Player of the Year, made the leap from contributor on a star-studded team two years ago to the standout player, winning women's 2013 Most Valuable Player award at the World Games. While such an honor shouldn't come as any surprise to Baylor fans, it did to Odyssey--she didn't know the Games had an MVP award.

"I was happy I won," Odyssey reflected, "but the gold medal meant more."

Cory's experience on Team USA involved scrapping and striving first for a spot on the roster and then for playing time. He tried out for the national team last May in Colorado, then survived two roster cuts to earn a spot on the squad that eventually finished ninth in the tournament.

"My biggest takeaway from the games was patience," Cory recalled. "I wasn't one of the biggest names on the team. I wasn't a starter when the games began. But after coming off the bench in the beginning, I got a starting spot in the third game and started from then on."

Every national team brings a different style of play to the Games, and both players said they grew from the necessary day-by-day adjustments, as well as from the experience of playing on a team comprised of the top collegiate athletes in their sport. Their coaches, who lean on them for leadership and productivity this year, are proud of what they accomplished and what they learned.

"The more you're on the basketball court and the more you have a basketball in your hands, the better you become, and Odyssey's played against the best the world has to offer," women's basketball coach Kim Mulkey, herself a former member of Team USA and Olympic gold-medalist, said. "She's just going to benefit. She is playing with a lot more leadership in her mind, both on and off the floor. She understands this is her last year to play collegiate basketball."

"When all of them go there and do well, it helps spread the Baylor name," men's basketball coach Scott Drew said. "It's great for Baylor Nation to be spread throughout the world, and it's great for the team because they're better players when they come back."