What we can learn from earwax 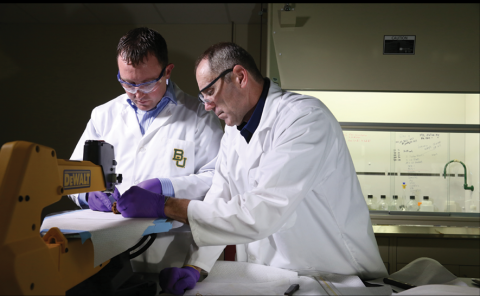 While walking to a local coffee shop, Baylor professors Stephen Trumble and Sascha Usenko had a simple discussion about whales that hatched the beginnings of a major scientific discovery.

Drs. Usenko and Trumble were simply trying to answer a graduate student's question about how to determine a bowhead whale's age.

Trumble, an assistant professor of biology in Baylor's College of Arts and Sciences, is a vertebrate physiologist and an expert on marine mammals. He mentioned that biologists historically have used whale earwax to date specimens.

"I was elated to then learn that scientists in the past have used this waxy matrix as an aging tool, similarly to counting tree rings," says Usenko, an assistant professor of environmental science in Baylor's College of Arts and Sciences.

As an analytical and environmental chemist, Usenko was fascinated to learn that many whale species accumulate layers of wax in their ear canals, forming an earplug over their entire lifespan, which is sealed and protected from the external environment.

"Then the question arose, could earwax plugs chronologically archive chemicals such as man-made pollutants?" Usenko says.

For more than two years, Usenko and Trumble worked to develop the analytical methods capable of answering that very question.

Trumble contacted colleagues at the Santa Barbara Museum of Natural History and the Smithsonian who agreed to provide whale earplug samples from their collections for the research.

Usenko and Trumble were able to obtain an earplug from a male blue whale that died after being struck by a ship off the coast of California as earplugs can only be harvested after the death of a whale. Usenko and Trumble then pioneered a technique to process the earplugs in order to test them for hormones, chemicals, and pollutants.

Using the whale earwax, the research team was able to extract and analyze the stress hormone cortisol, testosterone, organic contaminants such as pesticides and flame retardants, and mercury, demonstrating that both man-made and endogenous chemicals are recorded and archived in whale earwax.

"We were able to determine for the first time lifetime chemical exposures and hormone profiles--from birth to death--for an individual whale, information that was previously unattainable," Trumble says.

"The type of information we can now derive from these earplugs along with our methodology is exceptionally valuable," Usenko explains. "There is nothing like it. It really should be classified as a new field of research."

Their novel approach and findings appear in the Proceedings of the National Academy of Sciences of the United States of America, one of the most prominent scientific journals in the country. Their work has been featured in more than 200 articles in major news outlets from around the world, including Nature, National Geographic, National Public Radio, Smithsonian Magazine, Yahoo, The Huffington Post, Discovery Channel, MSN, The Christian Science Monitor, The New York Times, and Los Angeles Times.

To put their findings in perspective, scientists would have to track whales for decades--essentially during a whale's entire lifespan--in hopes of obtaining a fraction of the information that Usenko and Trumble are able to derive from one whale earplug. They have made it possible to study whales in a way that was previously inconceivable.

Traditionally, scientists relied on whale blubber to determine hormone and chemical exposure, but that method only provided information over short, finite periods of time and was difficult to obtain and cost-prohibitive.

With these new data, the professors are able to assess the human impact on individual whales and multiple generations, as well as marine ecosystems. They will be able to take snapshots in time of a whale's life or the condition of the world's oceans and create a detailed profile of each.

"You have this 100-year-old question: How are we impacting these animals? There is ship traffic, environmental noise, climate change and contaminants. Now, we are able to provide definitive answers by analyzing whale earwax plugs," Usenko says.

Their new methodology will enable them to gain a deeper understanding of whales today and those that lived decades or a hundred years ago.

"We are able to go back in time and analyze archived museum earplug samples that were harvested in the 1950s and examine critical issues, such as the effects of pollution, use of sonar in the oceans and the introduction of specific chemicals and pesticides in the environment over long periods of time," Usenko says.

"There are a myriad of ways that we can analyze plugs for a better understanding of marine ecosystems and these endangered animals. There is so much additional information that can be mined from studying earplugs."

Usenka and Trumble turned a casual conversation over coffee into intriguing research and discovering new knowledge, a collaboration process that is being cultivated at Baylor.