In anticipation of the birth of their first child, Bryan and Elizabeth Shaw purchased a digital camera. Like most new parents, they were excited and wanted to capture their baby's life and their joy at becoming parents. Little did they know that their camera would do more than snap baby photos; it would help them discover their son, Noah, had cancer.

Elizabeth, who left her position as a researcher at the Massachusetts Institute of Technology to become a stay-at-home mother, began to take pictures of Noah. She documented those special, simple moments--him cuddling with Bryan, him smiling, his beautiful blue eyes. During the third month of Noah's life, Elizabeth began to notice something peculiar in his pictures--a cloudy, white eye.

"One month later, after 'white eye' continued to show up in Noah's pictures but not in anyone else's, we informed our son's pediatrician at his checkup" recalls Dr. Bryan F. Shaw, assistant professor of chemistry and biochemistry in Baylor's College of Arts and Sciences. "That afternoon, an ophthalmologist diagnosed Noah with bilateral retinoblastoma."

Retinoblastoma, mostly occurring in children from birth to 5 years old, is an aggressive eye cancer that, if not treated in time, can be fatal if it spreads to the brain.

Noah immediately began three months of chemotherapy, but the treatment failed to shrink the tumors in his eyes. During this time he also underwent laser surgery to blast new tumors as they appeared. But, unfortunately, Noah's right eye couldn't be saved.

"After Noah's eye was removed, he endured proton beam radiation on the remaining left eye at 9 months old," Bryan says. "After helping out during the first of four weeks of radiation, Elizabeth took him to treatment every day for the remaining three weeks--in the middle of winter--in Massachusetts while I worked as a post-doctoral biochemist at Harvard and interviewed for faculty positions."

It was a difficult time for the family as they watched their son battle a life-threatening illness at such a young age. They relied on friends, family, and their faith throughout that trying time.

"Our church family helped a lot. They cooked us food during the first few weeks after the diagnosis when we were quite a mess." Bryan says. "During radiation, we had to be at the proton center between 5 and 5:30 a.m. every day for the entire month of January, but we didn't have a car, and the subway didn't run that early. There are only a few of these proton beam centers in the U.S., and so you can't get picky about scheduling. Our pastor and church friends gave us rides every morning. This taught me the practical benefits of being in a strong church community."

In an answer to the Shaw's prayers, the radiation treatment was successful and the cancer was removed from Noah's eyes.

"When Noah was 3 years old and we were all recovering emotionally, I began to examine all 9,000 pictures that my wife took of Noah and learned that the 'white eye' or leukocoria showed up when Noah was only 12 days old. We hadn't noticed it until Noah was 100 days old."

"I told one of my son's doctors, Shizuo Mukai, about my findings and asked him what the prognosis would have been if we had brought Noah in at 12 days old," Bryan says. "Dr. Mukai expressed that the tumors would have likely been so small in size and number that the right eye might have been salvaged, and radiation might not have been needed on the left eye."

Bryan became determined to understand the disease and whether the occurrence of "white eye" or leukocoria might aid parents and doctors in the early detection of retinoblastoma, which can help save the vision and the lives of other children.

"While wandering around at the Dana-
Farber Cancer Institute during one of his appointments, I had an idea that the world needs software to alert an unsuspecting parent to the emergence of recurrent leukocoria. I contacted Dr. Mukai, and my son's other doctors--Alex Kenosis and Carlos Rodriguez- Galindo--who agreed, and I began to research 'white eye' at length," Bryan recalls.

The question arose: Could parents use digital cameras and smartphones to potentially screen their children for the most common form of pediatric eye cancer?

In order to answer that question, Bryan and his team of researchers worked to better understand leukocoria. Bryan teamed up with Mukai from Harvard Medical School to conduct an in-depth research project.

Historically, children with retinoblastoma exhibit persistent leukocoria in photographs. Despite this link, digital photography has not been intentionally used by doctors to screen for retinoblastoma because "white eye" is assumed to be a symptom of advanced retinoblastoma, not early stage retinoblastoma--a paradigm that Bryan was able to dispel.

In their study, published in the science and medical academic journal PLOS ONE, the researchers discovered, through the use of amateur digital photography, evidence of leukocoria or "white eye," the principal symptom of retinoblastoma, could be seen in photographs during the earliest stages of the disease, for example, at 12 days old as in Noah's case.

"Diagnosing retinoblastoma continues to be a major challenge. One of the most effective methods for detecting it appears to be amateur photography," Bryan explains. "In a majority of retinoblastoma cases, it is the parents that initiate the diagnosis based on seeing leukocoria or 'white eye' in photos of their children just as Elizabeth and I did for Noah."

"Newborns and infants don't typically get checked out by an ophthalmologist, but many of them do get their retinas scanned multiple times a week, when mom or dad are snapping pictures to share on Facebook," Bryan adds.

Although children in the United States who are treated for retinoblastoma have a 95 percent survival rate, that figure drops below 50 percent for children in developing countries. However, surviving retinoblastoma is just the first hurdle. Typically, survivors experience moderate to severe vision loss as in the case of Noah and in some cases the loss of both eyes, but early detection and treatment can increase the chances of survival and save children's vision.

"In Namibia or India, for example, a parent's access to digital photography is probably going to continue to increase at a faster rate than their access to monthly pediatric eye exams," Bryan explains. "If we can create software that can detect leukocoria and alert a parent when it begins to occur persistently, then I believe digital photography can eradicate metastatic retinoblastoma from this world and prevent most of the deaths that occur."

Bryan discovered that the intensity of the "white eye" was different in each of his son's eyes, which suggests that a digital camera can not only alert parents that their child might have retinoblastoma, but it can also inform a doctor of its severity.

Inspired by Noah's cancer battle, Bryan has been able to make strides to help children with retinoblastoma. A feat that the National Institutes of Health acknowledged by awarding Bryan a Pediatric LRP (Loan Repayment Program) Award from its National Eye Institute. This award does not fund his research, but it does pay off 90 percent of his student loans. Accolades aside, Bryan wants Noah to know how his fight with cancer was able to impact others.

"When Noah grows up, it's my hope that he can look back on this period and realize the bad stuff that happened to him helped other people," Bryan says. 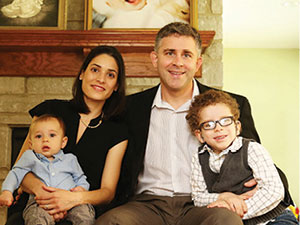 Today, Noah is an accomplished 5-year-old who plays the piano and learned to read at the age of 2. He also became a big brother when the Shaws welcomed another baby boy, Samuel, last year.

The Shaws have purchased a new camera, and Elizabeth continues taking pictures of the family, capturing memories of piano recitals, messy mealtimes, and Halloween costumes. This time, Bryan and Elizabeth can focus on the excitement and joy of being parents without worrying about cancer.